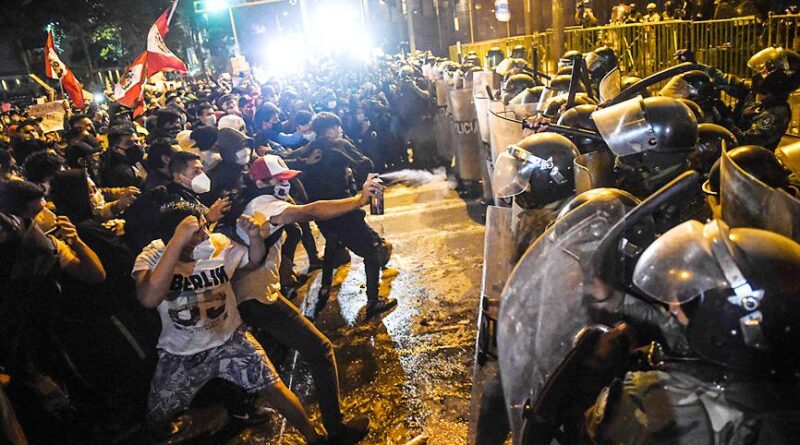 After the dismissal of Martín Vizcarra, who served as President of Peru from March 2018 until November 10, the doctor of philosophy and political analyst Miguel Ángel Pérez Pirela described the current—almost catastrophic—context of the Andean country which, due to the pandemic, is experiencing a health and economic crisis unprecedented in its history, in addition to the already prolonged political instability, the most recent sign of which was the departure of Vizcarra from power.

The expert indicated that Peru is one of the countries in which the coronavirus has hit the hardest, accumulating almost one million diagnosed cases and nearly 35,000 deaths, the twelfth and tenth most respectively worldwide. Peru also has one of the highest death rates in the world due to COVID-19 and until a few weeks ago, no country, proportionally speaking, had been so severely affected by the pandemic.

On the other hand, economic recovery is another challenge that Peru must face. In this regard, he specified that “ in mid-August, unemployment had risen to 8.8%, according to data from the Peruvian National Institute of Statistics and Informatics. At that time –August–around 995,000 people were looking for employment, in a country with a high component of informal economy.

The complex panorama described above exists within a long-term institutional crisis that, following the dismissal of Vizcarra, has now resulted in massive protests in the main cities of the country .

Citizens warn that political instability is the consequence of “a war to the death” between Congress and the Executive Power, which made President of Congress Manuel Merino head of the government, despite the fact that no one elected him to the presidency, as the protesters stationed outside Parliament, whose main slogan is “Merino does not represent me,” made clear.

According to a report by the multistate TeleSUR network, mentioned by the director of La IguanaTV, “the situation shows the contradictions between the constitutional powers in the country, while Peru experiences difficult economic conditions and one of the worst pandemic impacts internationally, a solution for which is demanded by the protesters.”

The country, he stressed, “is living difficult hours” and the situation is particularly worrying, due to the devastating effects that COVID-19 has left, as well as the number of Venezuelan migrants in Peru. These Venezuelans, suffering the effects of the blockade and unilateral coercive measures, and encouraged by a media discourse promoted by the regional right wing, decided to migrate and chose Peru as their destination.

“Today, Venezuela is receiving thousands of fellow citizens who are returning on foot, as if we were in the 18th or 19th centuries, from Peru, escaping from all these scourges that we have described,” he added.

As if this were not enough, the Peruvian institutions have promoted a xenophobic and racist discourse against Venezuelans living in Peru. In this regard, Pérez Pirela referred to the statements of Congresswoman Esther Saavedra, in which she called Venezuelans “criminals.” and indicated that “all Venezuelans, bad or good” had to leave because they came to “take work away from Peruvians.”

Additionally Vizcarra himself, as president of the country, promoted an anti-Venezuelan xenophobic policy in which he supervised and broadcasted on TV the deportations of Venezuelans in 2019, creating a security threat for thousand of Venezuelans who had emigrated, following a campaign—promoted by the Lima Group authorities during 2016 and 2017—promising them a better life in Peru.

“That is the Congress, that is the political discussion in Peru: xenophobic, racist,” said Pérez Pirela. In contrast, and to conclude his speech, he stressed that in Venezuela we will continue to receive Colombians, Ecuadorians, Peruvians and Chileans, “as we have done historically, without this xenophobic spectacle that many governments and citizens present against us.”