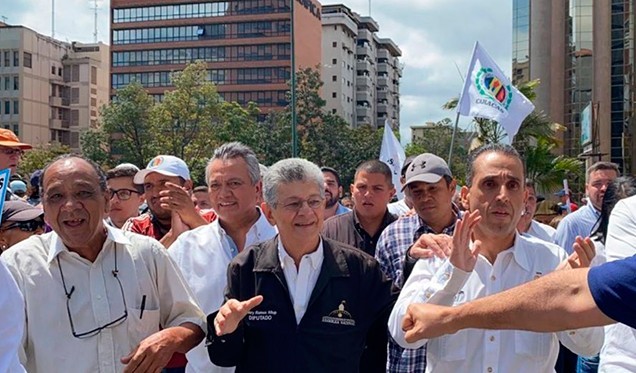 On Tuesday, the General Secretary of the right-wing Democratic Action (AD) party, Henry Ramos Allup urged the Venezuelan opposition to participate in the parliamentary elections, which should be held this year as established by the Constitution. “Let us prepare for the elections that the Constitution says must be done, which are those of the National Assembly, because this year its term expires. Or what are we going to do? Are we just going to sit here?” Ramos Allup said during a poorly attended march called by opposition sectors in eastern Caracas.

The so-called G4 is the core political group governing Guaido’s regime change operation locally and previously was central to “La Unidad” — an alliance of rightwing factors opposing Chavismo. Accion Democratica is one of the most important parties belonging to this coalition, besides Voluntad Popular, Primero Justicia and Un Nuevo Tiempo (formed by former AD members).

Accion Democratica is the only political party from the anti-Chavismo with some sort of work with its electoral base. They have 25 deputies in the National Assembly just behind Primero Justicia (33) and ahead of Un Nuevo Tiempo (21). They also have 4 governors, the only opposition party with governors in power.

“All elections must be governed by a reliable body, so we have to choose a different Electoral Council than the one we have now,” said the anti-Chavista deputy of the AN, a body that has been in contempt since 2016.

RELATED CONTENT: In Venezuela the Dollar Buys Less Every Day

This Monday the Electoral Nominations Committee was installed to elect the new board of the CNE, which will be chaired by the deputy of the AN of the First Justice opposition party, Angel Medina; and as vice president the deputy from Bloque de la Patria for the state of Lara was chosen, Julio Chávez, and as secretary the oppositionist José Luis Cartaya.

This committee will also be made up of 10 representatives of civil society who, together with the parliamentarians, may elect the new board of the Electoral Power.

The now vice-president of the Committee of Electoral Nominations indicated, last Thursday, that the committee would have a period between 50 and 56 days to elect the new members of the CNE, which will allow a date for the parliamentary elections, that should be held this year, as established by the Constitution.

It should be remembered that the deadline for the renewal of the CNE authorities has not expired, however. Said committee is part of the agreements reached between the National Government and sectors of the Venezuelan opposition in the National Dialogue Table, installed last September at the Yellow House, in Caracas.