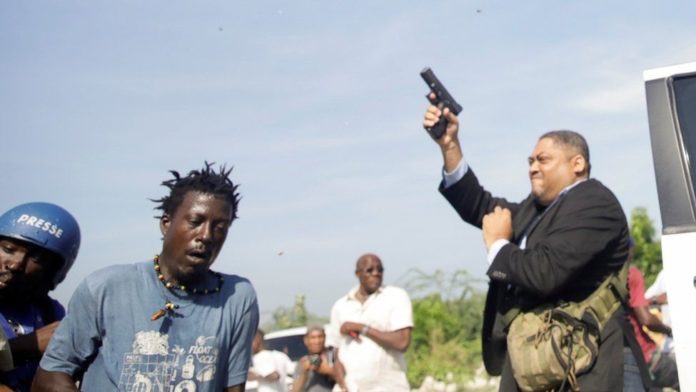 A senator wildly firing his pistol outside Parliament wounding Chery Dieu-Nalio, an AP photographer and a security guard . Demonstrators marched up to Pétionville, setting fire to cars and a bank. Another building was torched near the Champ de Mars. Armed men allegedly roughed up two senators inside the Parliament building.

This intensifying mayhem came at the start of a week which is seeing the closure for two days of all major businesses and banks by their owners, the blockage of a new government’s ratification, and the mum president cancelling his travel and address to the United Nations General Assembly in New York.

“We are not far from a victory,” declared leading opposition Sen. Antonio “Don Kato” Chéry on Sep. 23, referring to President Jovenel Moïse’s resignation which massive demonstrations have demanded for the past 14 months, like today’s uprising.

The protests are fueled by a severe gas shortage combined with long-standing charges of government corruption and dysfunction. Double digit inflation and unemployment, the aborted start of the school year, lack of a government budget, and widespread strikes for unpaid wages in sectors ranging from hospitals and courts to the tax office and local government agencies have left Haitians hungrier and angrier than at any time in recent memory.

Sen. Jean Marie Ralph Fethière of Moïse’s Haitian Bald Headed Party (PHTK) has become a star, albeit infamous. Videos and photographs of him firing his pistol in the air over cringing bystanders went viral on social media on Sep. 23. He claims to have felt his life was threatened by one or two demonstrators who verbally accosted him as he walked to his deluxe white pickup truck with his security corps in the Parliament’s parking lot.

Associated Press photographer Dieu Nalio Chery was wounded by an apparent bullet fragment in the left side of his jaw while a Parliamentary security guard was stuck by a bullet in the stomach. Fethière fired a few shots at the ground as well, which may have ricocheted.

Another PHTK Senator, Willot Joseph, also drew his pistol when verbally taunted and surrounded by demonstrators as he entered the Parliament that day.

The senators attempted to hold a session to hear the “general policy statement” of Moïse’s latest Prime Minister nominee Fritz William Michel, but the meeting was scrubbed for the second time, in part due to hundreds of boisterous demonstrators which encircled the building seeking to disrupt the session. They ran around the Parliament’s outskirts chanting and banged rocks on metal lamp posts (“bat tenèb”). A few protestors managed to sneak into the heavily guarded Parliament grounds, resulting in Fethière and Joseph’s gun play.

Other demonstrators even managed to get into the building. “Senator Antonio Cheramy facilitated the entry into my office of 12 heavily armed individuals,” claimed Senate speaker Carl Murat Cantave, who is a Moïse ally from the party KID. “Some of them assaulted me. One of them dared to put his hand on my collar and started shaking me violently.”

Sen. Dieudonne Luma Étienne, one of five senators accused of accepting a $100,000 government bribe to vote in favor of Michel’s “general policy statement” and thus ratify him, also claimed in a note that she was the victim of “an assassination attempt… by armed individuals… in the Senate chamber.” She also denounced “the blind violence of anarchists” in the note.

Demonstrators also marched up the hill to the Karibe Hotel in the Juvenat section of Pétionville, where Michel’s would-be cabinet members were awaiting word about the Senate vote. As the Senate session aborted, putative Sports Minister Manoeuchka Néré tried to go to her car to leave the hotel but was cursed by dozens of demonstrators. She retreated back to the hotel.

In the nearby Complex 18, the Haitian Union Bank (BUH), on the first floor, was vandalized of corn meal, rice, beans, and other items, while the Propharma pharmacy, upstairs, was also looted. The build was then set on fire. Protestors also broke car windshields and set vehicles on fire.

This isnt anarchy, its a politicized working class very aware that their oppression comes from entities like big banks, and target them intentionally. https://t.co/yPGsW4dx35

Demonstrators also set ablaze a building on Lalue near the Champ de Mars, not far from the Ciné Triomphe. Tumult was not confined to the capital. Sen. Cantave claimed that, in the northwestern city of Gonaïves, unnamed opponents of PM nominee Michel’s ratification “were paid to burn down my [medical] clinic” and other of his properties. His political headquarters in the town was also overrun, its furniture and papers thrown into the street and burned. Meanwhile, nearby, the Louise Gabrielle Foundation, owned by Cantave’s wife, was also trashed, as was the office of the Artibonite Departmental Delegation on Avenue des Dattes. (Following these attacks, the Haitian National Police (PNH) have reinforced security around Cantave’s residence in the capital, despite his bitter public recriminations against the new PNH director, Normil Rameau, for not providing him enough security in the Parliament and elsewhere.) In the face of the protests, all the major businesses and banks throughout the capital Port-au-Prince decided to close their doors for Tue., Sep. 24 and Wed. Sep. 25. The only business association to announce the impromptu business strike was the Professional Association of Banks (APB), which said it was shutting its doors to safeguard their employees’ security during these tumultuous days.

RELATED CONTENT: “Down with the Rebels Against the Bill of Sale!”: Guy Endore’s radical reimagining of Haiti and revolution

Ironically, iconic bourgeois villain turned aspiring political candidate Réginald Boulos, who saw several of his businesses torched and looted during the July 2018 uprising which began the latest revolutionary period, scolded his class brethren for their limited call. “They say it is to protest against the bad security situation,” he tweeted. “It isn’t to support the demands of the people who are demonstrating, who are being killed, who are asking Jovenel to go. My sympathies to all the victims…”

Protesters in #Haiti are setting fire to gas stations after being deliberately deprived of fuel for a month. The whole country is chaotic right now. pic.twitter.com/KtpYGQuuHV

As the demonstrations and violence crescendoed, President Jovenel Moïse cancelled his trip to the week-long UN General Assembly meeting the night before his departure on Sep. 24. He did not make any statement other than that Foreign Minister Bocchit Edmond would lead Haiti’s delegation and make the nation’s address to the world body. Even Moïse’s words are besieged.

Like a cherry on the cake, a seemingly banal but hugely symbolic shutdown added to Haiti’s air of crisis. Port-au-Prince’s Toussaint Louverture International Airport was completely closed until 6:00 a.m. on Wed. Sep. 25 due to an apparent electrical fire.

“Passengers arriving at the airport to take flights out early Tuesday found crime-scene investigators with cameras wearing white coats and blue latex gloves at the airport,” reported the Miami Herald. “As the large crowd formed at the entrance, there was no electricity inside the airport.”

The airport’s shutdown has historically come to be an indicator of major political crisis in Haiti over the past three decades of post-Duvalierist governments. Already, in recent weeks, the country’s foremost carrier American Airlines has reduced its daily flights from south Florida to the capital from two to one. A few years ago, it used to offer four.

Although this week’s airport closure was apparently not due to the battles rocking Haiti, it nonetheless contributed to the feeling, throughout Haiti and its diaspora avidly following the unfolding drama on Whatsapp, that Jovenel Moïse’s regime is about to fall.