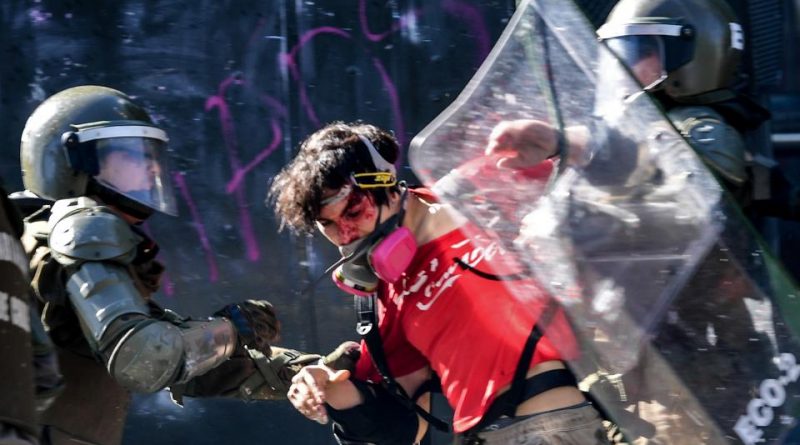 During the last few weeks, neoliberalism faced a series of defeats that sped up its agony and are leading to its death amidst large and violent upheavals. After nearly half a century of pillage, outrage and crimes of all kinds against society and the environment, we witness the downfall of the ruling model promoted enthusiastically by the governments of advanced capitalist countries; institutions like the International Monetary Fund (IMF) and the World Bank; and self-righteous intellectuals and establishment politicians.

Sebastian Piñera’s Chile, the main ship in the fleet of looters, sunk under the terrific push of unprecedented people’s protests, indignant and infuriated due to decades of lies, fraudulent tricks and media manipulation. The Chilean masses had been promised the paradise of capitalist consumerism. They believed in those lies for a long time. When they woke from their political somnambulism, they realized that the gang governing under a pretend democratic cover had in fact deprived them of everything: health and public education were snatched from them; they were blatantly defrauded by pension fund managers; while they were burdened with debts and without the possibility of clearing them, they witnessed, astonished, as the wealthiest one percent of the country took over 26.5 percent of the domestic revenues while the poorest 50 percent got only 2.1 percent. This entire plundering took place amidst a deafening media concert that numbed consciences, fed this artificial prosperity with indiscriminate credit, and made everyone believe that capitalism was fulfilling its promises.

But there is no one utopia, not even the market itself, that is safe from the action of its villains. And these burst onto the scene embodied by teenagers: their boldness in the Santiago subway system broke the spell, leading large numbers of citizens to realize they too had been mocked and defrauded so they went to the streets to express their unrest and anger. Those placid consumers suddenly became “vandals” or a naughty gang of “aliens” – according to the eloquent description by President Piñera’s wife – who confirmed with anger that they had been sentenced to survive in debt the rest of their lives, victims of – an insatiable, intolerant and violent – plutocracy and the corrupt partocracy allied with the former. There they are, to this day, fighting to end so much misfortune.

Neoliberalism suffered another defeat in Bolivia, when President Evo Morales was reelected with 47.08 percent of the votes over 36.51 percent obtained by opposition candidate Carlos Mesa. Even though the President led his closest contender by 10.57 points (more than the 10% required by Bolivian law to declare a winner in the first round) and there was not a single formal denunciation of rigging but instead yelling and howling, opponents are demanding a run-off or second round take place. They say a run-off is obligatory given irregularities in counting the votes and the way the results were informed (which was actually convincingly explained by Bolivian authorities), together with the small difference obtained by Evo (which was over 10 percentage points, of course). If this was the case, they should also demand the annulment of the 1960 presidential election in the United States when John F. Kennedy beat Richard Nixon by 0.17 percent (49.72% versus 49.55%). It would be better if Mesa kept in silence after losing by 10.57 percent. He won’t because he had already warned that he was going to reject any result other than his victory. If I win, elections were fair; if I lose, they were rigged. Nothing new: the Right never believed in democracy, even less in these latitudes.

RELATED CONTENT: Positive Signs that the Tide is Turning towards Humanity in Latin America

In tune with this generalized ideological climate against neoliberalism, Mauricio Macri’s neoliberal experience in Argentina was repudiated through the vote. October 27 was and wasn`t the first round of this election, as primary elections had already taken place last August for different political alliances to measure their strength. In that opportunity it was confirmed that only Macri would have enough votes to challenge the electoral power of the opponent Frente de Todos. The President gathered the preference of right-wing voters who had chosen other candidates before and probably a large amount of voters who showed up on October 27 for general elections. Anyways, some question marks are rising suspicion over the result of the ballot. For instance, it is hard to understand that the electoral ticket Fernandez-Fernandez increased their electoral support only by 250,000 votes, decreasing thus their percentage lead in relation to primary elections by almost 1.5 percentage points. It’s understandable that their contenders increased theirs but doing it by 2,350,000 votes and almost 7.5 percentage points is at least curious, especially in a context in which the economic crisis is worsening. Mysteries of election arithmetic which will be probably solved with final election returns. Nevertheless, those almost eight percentage points separating Alberto Fernandez from Macri are a very significant difference in a run-off. Mauricio Macri had won over Daniel Scioli by 2.5 percentage points (2.68% according to the final count) in a run-off in the 2015 presidential election. The truth is that the task of rebuilding Argentina’s economy and healing the deep wounds left in the society by Macri will only be possible by abandoning neoliberal prescriptions. The neoliberal manual caused a crisis in Argentina worse than the one resulted from the traumatic 2001 convertibility plunging. This together with social unrest in Chile (in Ecuador, in Haiti, as well as the election of Andres Manuel Lopez Obrador in Mexico) should discourage the next government from believing that it would be correct to take the path started by Chile almost 50 years ago.

It’s not easy to guess what is going to rise from the ashes of neoliberalism. It will be dictated by the ups and downs of social struggles and the sagacity of their leading forces; by their audacity facing all sort of eventualities and preserving the precious unity of democratic and left-wing political and social forces; and by the efficiency when organizing and raising awareness among the diverse and tumultuous popular forces. It will be a challenging but not impossible task. Uncertainty dominates the scene but one thing is for sure and that is that nobody in Latin America will ever again be able to deceive our people or try to win elections saying that “we have to imitate the Chilean model” or follow the steps of the “best pupil” of the Washington Consensus. This was advised for decades —in vain, given the unappeasable verdict issued by history— by then loquacious and now outgoing intellectual Mario Vargas Llosa together with neoliberalism’s stellar group of publicists who spread at will their falsehoods and sophisms thanks to their privileged presence in media oligopolies and right-wing propaganda devices. But this is the past. History has disproved them.