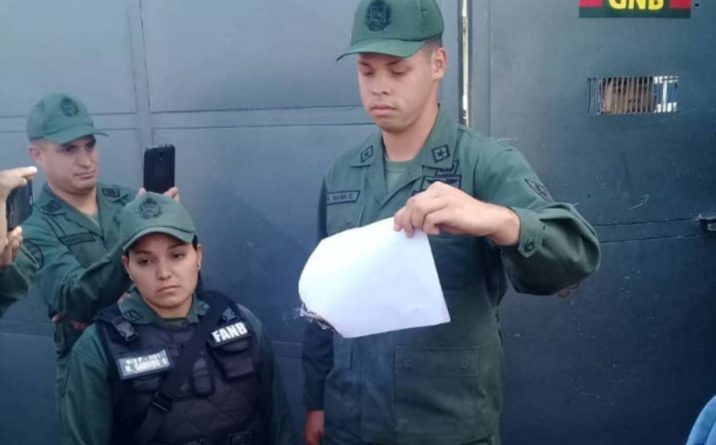 Amnesty is an instrument provided by law to secure peace after a traumatic event has occurred, such as a war.

In Venezuela, a document proposed by the opposition is currently being discussed as a general framework for future impunity for the acts that support the coup and that seek to annul, in a general manner, the criminal and administrative trials that have taken place during the Bolivarian Revolution. In this way, the fact of having been or being a Chavista is criminalized; to have been or to be an official; similarly, the 20 years of revolution are equated to a period of national upheaval in need of correction.

This instrument confirms that the parliamentarians of the National Assembly in contempt maintain a hostile attitude and ignore the pacific and jurisdictional interpretations of the Constitution of Venezuela. Thus, on the negation of the principle of sovereignty and the institutions of justice, they advance maneuvers to establish the bases -with the appearance of legality- for belligerent actions projected on the territory from abroad.

One of them is a text whose debate was convened referring to it as a decree but which appeared under the title of the “Amnesty and Guarantees Act”.   This is not a law nor issued following the constitutional procedure to grant amnesties, and has a content designed to serve as a license for subjects, individuals and groups, civil servants or civilians, but mainly military and police, who develop from their orders acts which serve to depose the constitutionally elected government of Nicolás Maduro Moros.

On this we must consider that issuing an amnesty is a competence of the National Assembly contained in numeral 5 of Article 187 of the Bolivarian Constitution.  Just as an amnesty is an exceptional law that is issued to forgive crimes committed when there are changes in the political system of the State and in situations in which national reconciliation is sought after wars, revolutions or governments that take power in a non-democratic way.

In this sense, as has been pointed out by jurists of recognized trajectory in this country, amnesties are laws that are passed after the  situation of commotion has occurred to conquer peace. Which is the antonym of what the National Assembly intends, which is to use it to favor the occurrence of a situation of commotion in the coming days, and those who join in doing so counting on the future impunity of their actions.

In a post made on her Twitter account, the constitutionalist lawyer Olga Álvarez adds that amnesty is a resource that grants the victor to the vanquished, a space for reconciliation where political crimes are forgiven, provided they have not violated the guaranteed human rights in the Constitution

Situating the objective in this way, the content does not stop surprising. The events already occurred to which they refer were subject to the Amnesty Law that was enacted during the government of Comandante Chávez, or the object of the so called “Criminal Amnesia Law” that was declared unconstitutional by the Constitutional Chamber of the Supreme Court of Justice (TSJ). So the National Assembly declares again that it does not recognize all the previous law of the country as well as legal jurisprudence.

The new facts that it incorporates are all those committed by those involved in the soft-coup techniques that occurred during 2017, called guarimbas, which ended the lives of a hundred people and focused on the promotion of futile crimes and crimes against humanity and hate crimes.

Evidenced as it has been that the National Assembly is transforming the concept of legality and legitimacy, when it takes away its necessary support in the popular will and in correspondence with superior and previous norms, to displace it by considering that which receives support from abroad is legitimate, it is evident that this document intends to be the umbrella with which future acts will be sheltered, in case they do not achieve the objectives that are proposed today.

An ideal scenario would be the formation of a paramilitary cell abroad financed with resources from the United States and technically supported by military forces from the region aligned with the US, which penetrate the border and reach the Venezuelan territory. Then the “democratic transition” would be consummated.

For this reason, the central axis is the military insurrection, a field in which they have been working publicly since the beginning of 2018, when Mike Pompeo (at that time a CIA official) revealed that he had studied the composition of the Bolivarian National Armed Forces ( FANB) with the objective of preparing a report to President Donald Trump to get an image of the solidity that manifested the Venezuelan civic-military bond.

After that confession, events related to internal sabotage in the FANB, infiltrated in time and without the necessary push to achieve political change, became more acute.

One was the Operation Constitution reported in Bloomberg financial by midyear 2018, which brought together military in the task of breaking into the elections on 20 May to kidnap the President and prosecute him.

Later, the former commander Osawldo García Palomo (enactor of the frustrated terrorist operation with drones) would provide that information in the portal, which supports the management of alliances with representatives of Brazil and Colombia. The purpose was to generate false positives in the border limits of Venezuela that would cause chaos and violence, justifying a military intervention.

None of these chapters can be read separately. There is a close relationship between these insurgencies and the recent invitations to desert, from the top brass, made up of National Security Adviser John Bolton and Defense Secretary Mike Pompeo, to national subordinates, made to the FANB.

The precedents allow a better appreciation of the panorama. They fit in the project of military coup, the tasks of the opposition parliamentary arm with the dissemination of the Amnesty Law and the assignment of “judicial incentives” to those who take part in the process of “reconstitution of power” that is mentioned in the Law of the Statute of Transition.

In short, what is presented as a law whose adoption process has not yet been completed and it may be assumed, will not be completed, is an open call to military sectors to produce a coup, which today is presented in phrases inviting them to accompany the National Assembly or to point out that they are only missing so that the decisions of that group have practical validity.

They might have, in that case, validity: that one that comes from de facto events, but it would never obtain legal validity only because a tiny group discuss the text and because some are convinced to obey it, because the Constitution of the Bolivarian Republic points out clearly: only the law sanctions the National Assembly, promulgates the President of the Republic and publishes the National Printing Office. Contiguous with other documents that want to give legal framework to the coup, the law promises impunity to all those officials and military who join the planning of sabotage and terrorist acts that violate the rules and lead to the internal collapse of the country.

Now, the proposals seem to land spontaneously. Recently a group of individuals in uniform of “the Venezuelan armed forces”, supposedly exiled soldiers in Peru, sent a statement acknowledging Juan Guaidó as “interim president” of Venezuela, and summoning all the military components to support the transition and non recognition of the presidential authority of Nicolás Maduro.

Like this, we saw the events that took place in Cotiza on Monday, January 21, as well as the activity called for on January 26 by the opposition, which was intended to take the document to bodies of the FANB that clearly rejected its content .

This brief media show will not result in the rupture of the FANB, but it is a prelude to the next scenarios that will be opened with the normative framework elaborated by opposition deputies.

The correct reading of this in the ongoing aggression on the country allows the State and its military high command a margin of maneuver to forecast irregular activities and neutralize them before their occur.