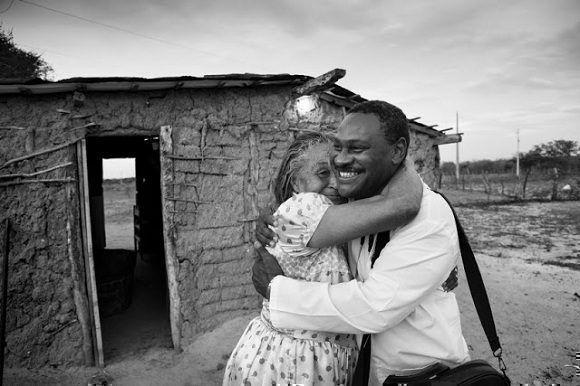 Knowing yourself to be a servant of a foreign power makes you smell like a mercenary. To align oneself with the worst lies to harm our peoples is also shameful. And Luis Almagro does that every day.

In the Cuban case, this man has made a point, so that, at the slightest blink of an eye from the U.S. State Department, he runs to put himself first in the line of the genocides, and even more so now when he gives himself up completely for the sake of being re-elected as secretary-general of the OAS, the nefarious institution with the American surname.

The most recent agreement between the government of Donald Trump and the OAS of Luis Almagro was the organization and realization of a forum in Washington with the title “The Dark Reality Behind the Cuban Medical Missions” whose only purpose is to discredit the health programs of the Third World, where the doctors of the island have carried out a solidarity project never achieved by any other country at a world-wide level.

Neither Trump nor Almagro would ever think of recognizing that more than 400,000 health professionals have participated in missions outside Cuba since 1963, including those following hurricanes, earthquakes and the Ebola crisis in Africa. During that time, a total of 1,923 billion 712,550 consultations have been carried out, according to figures released by the Cuban Ministry of Public Health. There are currently around 29,000 collaborators in 65 countries.

RELATED CONTENT: Almagro Believes he Will be Reelected as OAS Secretary General

Who, other than a Trump or an Almagro, would think – however much they hate Cuba – of questioning one of the noblest pillars of human solidarity, the one provided by our nation, which cures illnesses and alleviates pain in the souls of the unprotected of this world?

If that is the case, the suggestion that comes to mind is to ask the governments that still belong to the OAS to put an end to an institution that is so harmful to our peoples or, at least, to veto a secretary-general like Luis Almagro, the worst of the worst when it comes to dealing with countries and governments that promote the most noble programs of solidarity.

Does the OAS need a real impeachment against its secretary-general? Perhaps then he would be even more like his master, Donald Trump.

The Secretary-General of the Organization of American States organized a conference at the headquarters of that organization on the alleged crimes against humanity committed by Cuba in relation to Cuban medical cooperation abroad.

The US State Department, in its Report on Trafficking in Persons 2019, denounced Cuba’s international medical cooperation and, a month later, imposed visa restriction sanctions on Cuban officials linked to medical missions.

The Agency for International Development (USAID), a U.S. institution that provides funds for subversion programs against the Cuban government, allocated $3 million for projects directed against Cuban medical brigades abroad.

The president of Brazil, Jair Bolsonaro, during his speech at the United Nations General Assembly, ridiculously tripled, out of malice or ignorance, the lying and unfounded figures used by Washington, that Cuba maintains 20,000 military personnel in Venezuela, by referring to Cuban health collaborators.

The medical cooperation programs with Ecuador and Bolivia end, a decision encouraged by the persecution by the United States, which has forced the cessation of these programs as it did before in Brazil (November 2018). The declarations of high officials of the United States slander that the Cuban medical brigades in the Bolivarian Republic of Venezuela are military troops are notorious.