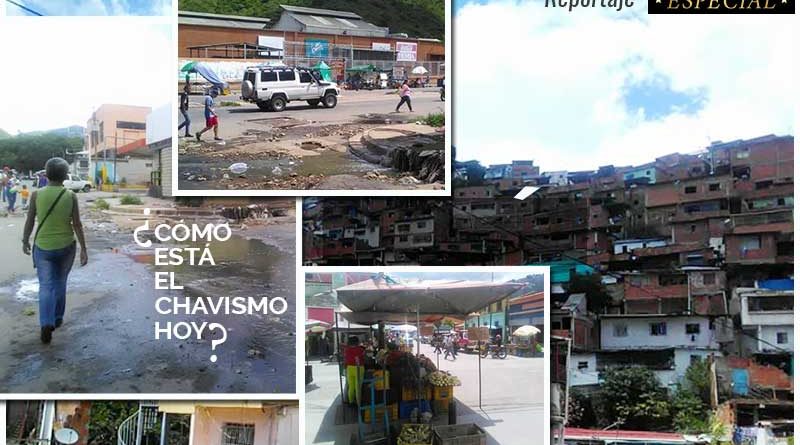 Read the latest work in our series of special reports on Chavismo from below. In the text, Antímano, which historically was the most Chavista parish in Caracas, confesses in light of the national situation.

With its 131,963 inhabitants, according to data from the last National Census of 2011, and its 18 barrios, Antímano is an electoral thermometer for Chavismo, which in 2015 lost an election for the first time in its history. On that occasion, the “Antimanenses” chose as their representatives to the National Assembly the anti-Chavistas Richard Blanco and Stalin González.
Antímano, like the whole country, does not escape the economic crisis and the deterioration of public services that have become widespread in Venezuela.
For some inhabitants of the sector, the Antímano parish has been, for quite some time, in frank abandonment.
This reality has led some inhabitants of this populous area to disappointment, and to no longer want to participate in the political movement for which they fought so hard in the past.
Indira lives in the barrio La Acequia. She is 31 years old, is an accountant and worked for many years for the State. Now she works in a private company, she assures [us] that she is still a Chavista, but that the mismanagement of the state administration by the government of President Nicolás Maduro has led her to abstentionism and discouragement.
“I am a Chavista, I always gave my vote to Chávez, but it seems to me that this government is blind. It does not listen to us, it does nothing, it is as if we did not exist,” says the young woman aboard a “pirate” public transport unit, one of those that leave from Zona Rental to Caricuao, and which has Antímano as a mandatory stop.
“Would you vote for the process again?” we asked her, as she looked distractedly out the window, with the tired look, typical of those who live on the outskirts of the capital, who have to get up before dawn and return after sunset.
“No, but I would not vote for Juanito Alimaña neither,” she says, referring to the nickname with which the president of the National Constituent Assembly, Diosdado Cabello, refers to deputy Juan Guaidó (“tricky little Juan”) in his weekly TV show.
But there is another sector of Chavismo that thinks differently.

RELATED CONTENT: Two New Disappointments for the Coup Planners in Venezuela
José Borges, 42, lives in the Germán Rodríguez barrio with his 7-year-old son Miguel and his wife. They rent a small room, an annex of a single dwelling, for about 5 years.
Although both are professionals and have extra jobs, the salary is not enough to get something bigger. They insist that when Chávez was alive things worked better, because he guaranteed it.
“Chávez was a guarantee that things would work properly, but the economic war, also some negligence regarding the responsibilities of the average authorities, have put Antímano currently in a situation of abandonment,” he says to the Supuesto Negado team, while looking out the window, whose view is adorned by hundreds of houses like his own.
His complaints seem to be the echo that resounds throughout Venezuela: excessive water rationing, [hand carried] cans for clean water, accumulated garbage on the streets and delays in collecting these solid wastes, difficulties in acquiring domestic gas or irregularities in transport routes, among others. “In Antímano we are at the mercy of the speculation of bus drivers, who mostly eliminated the provision of traditional service, of the internal routes, approved by the mayor’s office, and provide services in the pirate modality, with express stretches via highway, so that you have to pay them what they want, and allocate what little cash you have.”
His family, he says, also has to wait in line to get domestic [cooking] gas in a cylinder. Although he affirms that the communal council of his sector manages it, he comments that there are many times when he has had to leave the parish to get it.
A little further down, along Calle Real, the main street in Mamera, we find Leandro Gómez’s family. He lives with his two brothers and his parents, of the third age, pensioned by the Mission “En Amor Mayor”.
He defines himself as a Chavista at heart, but says that this does not prevent him from realizing that Antímano has deteriorated, especially in the provision of public services.
“The water here arrives on Sundays and they turn it off on Wednesdays, but sometimes it takes several weeks for the service to be reconnected,” he said.
He also denounces what in his opinion is an irregular handling by the communal council of the CLAP benefit bag.
“Here the Santa Eduviges Communal Council meets once a month and they ask people to pay three fees: the cost of the bag, the administrative expenses and the transfer, all this goes to the bank account of one of the spokespersons, who by the way we choose ourselves, and she passes it to Imerca. But two or three months pass without the CLAP bag arriving when the families of the parish have deposited or transferred, I have never understood this and the Communal Council does not explain it either,” he said.
Gómez, who has lived in Mamera for 33 years, assures that despite the difficulties, in a call for elections, whether parliamentary or of any kind, his vote would go back to Chavismo.
“Yes, I would vote, and I would vote again for my revolutionary government, I support President Maduro 100%, just like when Commander Chávez was there,” he declares and asks the authorities of the national government to be alert to the lack of interest in monitoring compliance with the missions, and urges them to listen more to the people.
“Commander Chávez said it: the people are the power we have, we must listen to the people, for that he created the great laws,” he added.
José Borges is of the same opinion, who also assures that not only he and his wife would vote, but that Antímano as a whole would exercise its right to vote.
“Antímano always votes, no matter what happens, and has always shown up, and despite the fact that the number of voters in schools here has decreased, the machinery continues to move on,” he said.

Between the base and the middle managers

Fátima Guveira is the president of the El Depano Community Council. Her shortcomings and problems are not very different from those of her neighbors, only that she apparently handles a little more information about them.

RELATED CONTENT: Accion Democratica’s Ramos Allup Urges the Opposition to Participate in Parliamentary Elections
She explains that the delay in gas distribution, which is in the charge of the Gas Antímano Social Property Company, could correspond to various factors such as fuel shortages in the filling center or malfunctions in delivery trucks, which are only three to attend the entire parish.
Guveira also affirms that in the area she serves, CLAP subsidized food arrives on time once a month, but in Antimamanian businesses “exorbitant prices” are demanded for these same products, and calls for a “heavy hand” against this phenomenon (black market resellers).
“The prices are exorbitant every day, like bachaquerismo that is on the rise, we need a strong hand against it,” she exclaims and remarks that to the problems that urban clean up service presents, the very members of the community dumping waste everywhere add to it. But despite everything, Fátima guarantees that at the polls she would once again give yes to a new term for Nicolás Maduro, or in the case of the parliamentarians, to recover the ground lost four years ago, because for her it is not “a man ”, but a socio-political process that cannot be lost.
“I think that like Chávez, there’s none, but for something he asked us to support Nicolás Maduro, in addition, it’s not a man, but a process that we must support, with Maduro in Antímano the programs have been maintained and some have been strengthened, However, it cannot be denied that there is a little apathy because of the national reality, that is where we must work hard to maintain and not drop this process,” she added.
“Of course I would go to vote, not out of obligation, but out of conviction, I am with the process and I plan to support it, as I told you, not for a man but for the process itself. To continue with the legacy of Commander Chávez, what we have achieved so far we cannot allow to be lost,” she insisted.

One step from the top

The councilor for the United Socialist Party of Venezuela (PSUV) for Antímano, Jimy Gudiño, also offered Supuesto Negado his point of view about the situation in the most Chavista parish in Caracas.
In a telephone interview, Gudiño acknowledged that there are problems and deterioration in public services, a situation that in his opinion is aggravated by the blockade that weighs on Venezuela.
“The case of Antímano does not escape any of the realities of the parishes of Caracas, or of the parishes at the national level. Right now we are being victims of an economic, commercial and financial blockade. That blockade has led to deterioration in some public services, but we are organizing ourselves at work tables,” he explained.
He explained that there are currently 22 communes and 197 Communal Councils, which makes Antímano one of the parishes whose Popular Power is more organized, and that is why he has been able to resist the attacks of the crisis. “It is one of the most organized parishes on the subject of Popular Power. If we consider the political issue we have 65 UBCH [local party groups], it is a high percentage of organization within the territory (…) and if we consider the issue of the different technical tables in the popular sectors, we can say that we have more than 60 health committees and more than 50 land parcel committees,” he explained.
The representative of the PSUV guarantees that Antímano and its population have high morale and the electoral machinery is prepared to defeat the opposition in any scenario. However, he does not see presidential elections in the immediate panorama, since, he says, the opposition must wait for Maduro to fulfill half of his mandate, which began in January this year, to activate a recall referendum.
“We are prepared to win the elections, we have a network ready to win the elections, whether they are from the AN or whatever elections they may be (…) Antímano will continue to stay over 70 percent in favor of the Bolivarian revolution,” Gudiño estimated.
Four different visions of reality, from the grassroots, to the middle management, reaching to high “Antimanense” politics, each one observes, lives and feels the parish in a different way.
“It depends on the glass you use to look at it”, this popular saying seems to fit Antímano perfectly, which in Chávez’s time became one of the strongest and most impenetrable Chavista bastions, whose streets he traveled in 2010, to rescue those affected by the rains and in 2012, when a human river accompanied his campaign caravan for the elections of August 2012.
“In 2010, Commander Chávez was here in the parish and it will be difficult for many generations to forget, how that man went to the top of the hills to accompany the people,” recalls José Borges, while his gaze is lost through the window of his small room, at the most Chavista parish in Caracas.