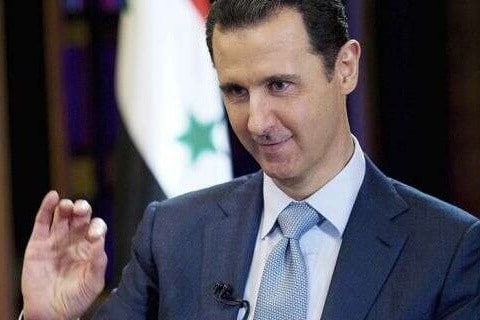 Damascus (MEE) – Syrian President Bashar al-Assad says that Donald Trump is the best president in US history because he has been open about his intentions to take possession of Syria’s oil.

“I tell you he’s the best American president. Why? Not because his policies are good, but because he’s the most transparent president,” Assad told Syrian state TV on Thursday during a wide-ranging interview.

Assad’s comments come days after Trump made a stunning suggestion following the raid that killed the Islamic State group (IS) leader Abu Bakr al-Baghdadi that the US would be willing to fight for Syria’s oil.

“Look, we don’t want to keep soldiers between Syria and Turkey for the next 200 years. They’ve been fighting for hundreds of years. We’re out,” Trump said.

“But we are leaving soldiers to secure the oil. And we may have to fight for the oil. It’s OK. Maybe somebody else wants the oil, in which case, they have a hell of a fight. But there’s massive amounts of oil.”

Trump’s remarks were all the more striking given that three weeks earlier, he ordered the withdrawal of 1,000 US troops in northeast Syria, saying he was getting the United States out of “endless wars” – and essentially green-lighting Turkey’s offensive in the area.

Over the past 10 days or so, under pressure from his Republican allies and Pentagon officials, Trump has been on a new narrative kick, highlighting how critical it is to ensure IS does not retake Syrian oil fields.

But in the Baghdadi news conference, Trump also said that the US should profit from Syria’s oil.

“What I intend to do, perhaps, is making a deal with an Exxon Mobil or one of our great companies to go in there and do it properly,” he said.

Does Syria even have enough oil to entice major producers? Doubtful, say some analysts. It’s just not lucrative enough.

During a short-lived oil boom in the mid-1990s, the country’s peak production was 600,000 barrels per day. That figure is dwarfed by Saudi Aramco’s production last month, which was reportedly 9.9 million BPD.

Whatever the case, Assad said Trump’s words are refreshing.

“All American presidents commit crimes and end up taking the Nobel Prize and appear as a defender of human rights and the ‘unique’ and ‘brilliant’ American or western principles,” he said.

“But all they are is a group of criminals who only represent the interests of the American lobbies of large corporations in weapons, oil, and others. Trump speaks with transparency to say ‘We want the oil’…What do we want more than a transparent foe?”

Assad also said Trump’s decision to keep a small number of US troops in the northeast showed that Washington was a colonial power that was doomed to leave once Syrians resist their occupation as in Iraq.

But he said his country could not stand up to a great power such as the United States and that ending the presence of American troops on Syrian soil was not achievable soon.

Assad and Trump have previously come to blows. After the April 2017 chemical weapons attack in Khan Sheikhoun, Trump fired off a volley of missiles to the military base from which the massacre was thought to have been launched.