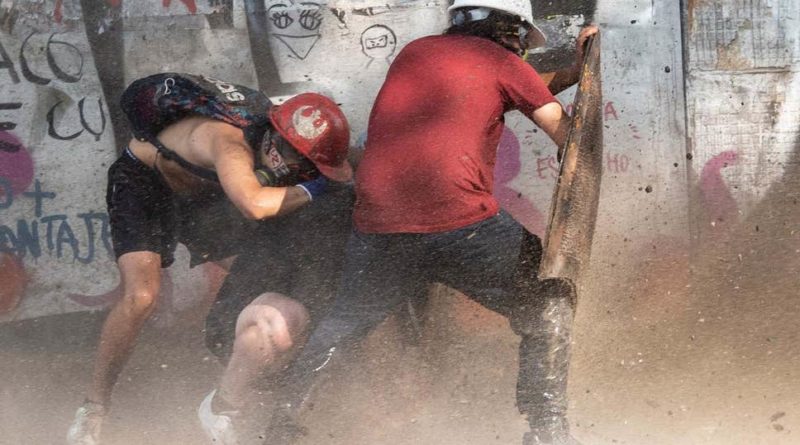 Security forces have deliberately shot demonstrators in the eyes and forced those arrested to strip naked. Some of those affected tell Naomi Larsson

Breathing air thick with teargas and smoke from makeshift barricades on Valparaiso’s street corners, Carla Casoni remembers feeling her skin and eyes burn with the chemical-infused water used as a common police tactic to disperse demonstrators.

“I lost vision temporarily so I was an easy target for the police,” she says. Casoni is one of nearly 30,000 people who have been detained, many arbitrarily, in more than two months of unrest that has swept across Chile.

Just days before Casoni’s detention in the port city on 22 October, Chile had imploded into a social uprising initially sparked by a student protest over metro fare hikes in Santiago. People across the country have since mobilised against economic and social inequality, engaging in mostly peaceful but sometimes violent protests.

Over the weeks, protests have been met with state repression. Soon after the unrest began, President Sebastian Pinera sent military to the streets and issued a curfew, declaring authorities “are at war”. In the following two months, security forces have been accused by rights groups of brutality and a series of human rights abuses, including torture and sexual violence.

Casoni tells The Independent she was beaten by Chile’s Carabineros, the militarised police force, during a protest in the port city. She was with demonstrators who had blocked Avenida Errazuriz, a main thoroughfare in Valparaiso, when a Carabinero pinned her to a tree and hit her legs and back with a baton. She claims she was hit again while she looked for her documents and ID card, and again on the way to the police vehicle.

She describes hours in detention at a local police station as being robbed of her dignity. She says she and other detainees were forced to undress as part of a rigorous search process that has been condemned by rights groups. Casoni had to strip twice, once at the police station, and again while being detained by the gendarmeria, Chile’s penitentiary unit, where she was forced to perform squats while naked in front of a group of other detainees and officials.

The practice of forced nudity was banned during a revision of police protocols in March 2019, yet human rights organisations have filed hundreds of complaints of inhumane treatment since October. Records from the country’s National Human Rights Institute, reviewed by Human Rights Watch, show officers were more likely to force women and girls to strip than men.

“It’s a gross abuse of power,” she adds. “It’s very degrading. It’s important to underline that all women have been through this process of being ‘searched’ like this – pregnant women, older women.”

Casoni spent the night in a 2mX3m cell with 17 other women who had been arrested during the protests, one pregnant, and another who was over 60-years-old. They were not told the reason for their arrest and were denied their rights to a phone call. They were kept overnight without food or water.

Casoni says they were also denied medical help despite one woman experiencing a panic attack, and another having obvious external injuries including wounds on arms and legs that needed immediate medical attention.

“Only later have I begun to feel the consequences of this experience,” she says. “I have anxiety, and a general feeling of insecurity and distrust.”

Her account exposes the cruel treatment and sexual violence many people have experienced at the hands of Chile’s police forces. “I’m only giving an account of this particular district, on one night of protest. This is happening everywhere, this abuse of power is systematic,” she says.

The National Human Rights Institute concluded in its annual report that the state’s response to the mass protests “produced, as a whole, the most serious and multiple violations of human rights committed since 1989”, referring to the 17-year dictatorship of General Augusto Pinochet that ended in 1990. The national police force has not been purged or reformed in the 30 years since.

It has presented 1,080 judicial actions against Chile’s security forces, including allegations of torture, rape, and homicide.

“This happened in democracy, in our democracy. How was it possible,” Sergio Micco, then director of the institute, said, referring to the human rights abuses and repressive measures taken by state forces.

The United Nations and NGOs including Human Rights Watch and Amnesty International have condemned the level of repression, calling for urgent police reform.

I want to say to the rest of the world, don’t abandon us. Don’t forget us. In Chile they are mutilating us
Albano Toro Cardenas, medical worker

“During these two months the repression and the acts of the Carabineros has been a strategy to implement terror into the population,” says Claudio Nash, a professor at the University of Chile’s department of international law. “What they want is that the public don’t go out on the streets to protest, under the threat that if they do the consequences will be severe – you could be arbitrarily detained, beaten, possibly tortured.”

Teargas, water cannon and “non-lethal” firearms, including pellets or rubber bullets, are used as common practice to disperse protests, but rights groups say this is excessive use of force, especially on non-violent protesters.

Studies have found that the water used to disband protests contains pepper spray and caustic soda, while the supposed rubber bullets used by police were found to contain materials like lead, and just 20 per cent rubber.

Out on the streets, some 405 people are estimated to have suffered severe eye injuries from non-lethal firearms or teargas canisters.

The UN said the “alarmingly” high number of people with eye injuries suggests the weapons have been used “improperly and indiscriminately against international principles”. The victims say police shot directly at their faces.

Medical worker Albano Toro Cardenas, 40, was volunteering to help the wounded during a protest in Iquique in November.

Volunteers had set up a makeshift medical centre on a side street, treating people with multiple lesions from firearms. He remembers a chaotic day of protests, the air filled with teargas and the sounds of gunshots piercing the air.

Toro’s voice falters when he recalls the moment that changed his life forever.

He describes “a concerted effort by special forces” to disperse people from the streets at night. Toro was clearly identified as a medical worker and wore protective gear, but it proved to be in vain. During the crackdown on protests, he felt a sudden impact on his left eye.

RELATED CONTENT: Urgent Call for Internationalist Solidarity with the Struggle of the Chilean People

“They shot at my face, shattering my cornea and destroying my eye. At this moment I’ve lost my vision completely and I’m not going to get it back,” he says, revealing his left eyeball that is bloodied and red. Toro can’t identify the officer who shot at him, but he believes being hit in the eye with a pellet was no accident.

“This has changed my life. I haven’t returned to normal life, I can’t leave my house. The headaches, the stress and trauma are severe,” he says.

“We’re in crisis. All of us are affected – poor people, workers, business people. I was protesting by helping the wounded, and this is what I have had to pay.”

Cristian Correa, a legal adviser for a commission in Chile responsible for identifying the disappeared during the dictatorship, says the level of police violence is “really worrisome”.

“When you read the type of abuses, its stuff that reminds me of the dictatorship. I don’t see much of a difference between those reports and the reports from the conduct of police during the dictatorship,” he adds.

The director of the Carabineros, Gen Mario Rozas, has said there are 856 internal investigations underway related to the reports.

Chile’s president, writing in The New York Times, has said: “During these difficult and violent times, as we fought to restore public order and security, our government took all necessary measures and precautions to ensure the utmost respect for the human rights of all our citizens.

“There is evidence of abuses and excessive use of force, but we granted our autonomous National Human Rights Institute full access to perform its legal mandate in the protection of human rights.”

But as the days go on and parts of the country return to a sense of normality, the brutality seems to have become a part of life here.

In December, video footage shared on social media showed a 20-year-old man being rammed by police vehicles in Santiago. The officer driving the vehicle has been charged.

For the thousands who have faced repression first hand, the damage feels irreparable and the words of the state do little to help.

“I want to say to the rest of the world, don’t abandon us. Don’t forget us. In Chile they are mutilating us,” says Toro.

Featured image: Demonstrators take cover as they clash with riot police during a protest against the government ( AFP/Getty )