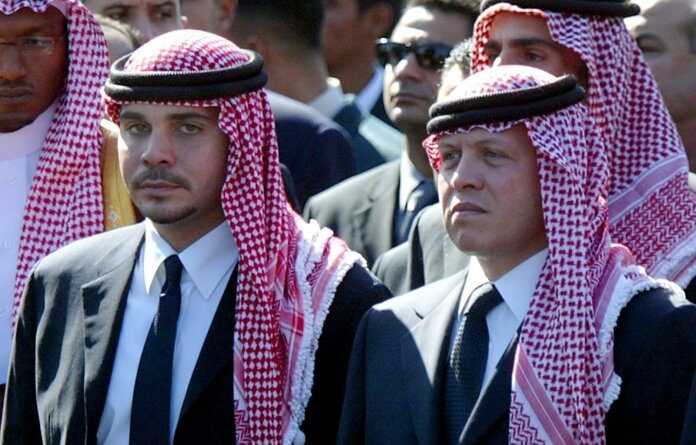 Pattern of U.S. Support for Autocracy across the Middle East

King Abdullah II, who is Hamzah’s half-brother and the absolute ruler of Jordan, ordered Prince Hamzah to cease communications with the outside world.

Prince Hamzah said he would not keep quiet, tweeting, “I’m not going to obey when they say you can’t go out, you can’t tweet, you can’t communicate with people.”

The Jordanian deputy prime minister, Ayman Safadi, claimed that the prince was involved in “incitement and efforts to mobilize citizens against the state in a manner that threatens national security,” the Associated Press reported.

The prince denied the allegations, although in a video message he did call out the government as incompetent and corrupt.

Grooming and Staging
Prince Hamzah was educated at Western institutions, including the Harrow School and the Royal Military Academy at Sandhurst in the UK and Harvard University in the U.S. Likewise, King Abdullah II attended elite U.S. prep schools as a teenager and then Sandhurst.

Such an education helps the king put on a smooth, charming face to Western audiences.

The U.S. government and the Jordanian regime go back many years. In 1977, Bob Woodward of the Washington Post reported that the Central Intelligence Agency (CIA) had on its payroll King Hussein, father of Hamzah and Abdullah II. To this day, the CIA maintains a deep relationship with the primary Jordanian intelligence agency, the General Intelligence Directorate (GID).

With its close ties to U.S. intelligence, Jordan has played a central role as a staging and training area for CIA-backed groups operating in Syria.

The New York Times acknowledged that President Barack Obama’s support of the CIA program, known as Timber Sycamore, “came in part because of intense lobbying by foreign leaders, including King Abdullah II of Jordan and Prime Minister Benjamin Netanyahu of Israel, who argued that the United States should take a more active role in trying to end the conflict.”

It should come as no surprise that Jordan and Israel operate in concert vis-à-vis pressuring Washington.

Since the 1994 Israel-Jordan peace treaty, the king of Jordan has played his part successfully: Keep Palestinian activism to a minimum within the kingdom, secure the Jordan River border, coordinate on intelligence matters, and stand aside as Israel expands eastward.

Occasional diplomatic spats do nothing to change Jordan’s key role in supporting Israel—despite its ongoing record of human rights violations.

Abdullah II and Hamzah have put on a cordial public face for most of their lives, but animosity reportedly remains from when Abdullah II, who had named Hamzah crown prince in 1999, rescinded the title in 2004. Abdullah II then conferred the title upon his own son.

On Monday, April 5th, the BBC reported that Israeli businessman Roy Shaposhnik, a self-declared friend of Hamzah, offered to fly the prince’s family out of the country to stay at his house in Europe.

By Tuesday, the Jordanian regime had outlawed reporting on the alleged coup. This included social media and news outlets.

On Wednesday, a TV newscaster read a speech from King Abdullah II, affirming “The sedition has been nipped in the bud.” Prince Hamzah has “pledged to remain loyal,” and he is “now with his family in his palace under my care.” The speech made clear that the government was still investigating the alleged plot.

The Jordanian regime soon backed off its claim that Prince Hamzah had intended to mount a coup. The prince has laid low since, making a lone brief appearance. The regime’s security services, particularly the public prosecutor at the State Security Court, continue investigating the events.

Western Response
London and Washington promptly pledged their support for King Abdullah II, who is a key ally of the U.S. ruling class, Israel and, despite occasional personality clashes, absolutist Arab regimes in the Gulf.

The latter regimes, including the Saudis and Emirates, ever fearful of losing their own grips on authority, were also quick to voice their support for the Jordanian king. The Saudi regime has categorically denied speculation that it was somehow involved in the alleged coup attempt.

Nearly across the board, Western press outlets have misrepresented the situation, stoking fears that Jordan’s position as “an island of stability” in a “volatile region” and “tough neighborhood” might be in jeopardy.

Royal Pestilence
Royals are a portion of the ruling class ripe for dissolution. Royalty plagues not only the Middle East but also parts of Europe and Asia, though many royal families outside of the Middle East serve more as symbols than concrete political participants. Nonetheless, in all cases, top royals live lavishly as parasites upon the body politic.

In Japan, for example, where the monarchy has been politically neutered since the end of World War II, the reigning emperor lives largely out of touch from society and has done nothing to rid the Japanese of the numerous U.S. military bases infesting the island country.

In Thailand, protests against the strict Thai monarchy are ongoing. In Spain, where the king serves symbolically as head of state, scandal after scandal led to King Juan Carlos’s 2020 abdication and eventual move abroad. It is no coincidence that he reportedly lives now in the United Arab Emirates, one of the more oppressive regimes on the planet. Class Nature
The alleged coup attempt in Jordan must be seen against a backdrop of class struggle. The D.C.-centered alliance of autocratic elites in the Middle East, in which the Jordanian regime plays a pivotal role, faces off against an Arab working class long denied self-determination, dating back through British, French, and Ottoman rule.

As they go about their daily lives, and maneuver to retain absolute authority, the ruling class knows it is only a matter of time before the next popular revolution breaks out.

There is no indication that Prince Hamzah, if he were to ascend to the kingship, would open the country to democracy. The country’s current status as a “constitutional monarchy,” wherein a parliament offers legislation and the king rules with a tight grip, would likely be his preferred system of command. If king, Hamzah would rule with absolute authority while offering the tribes and Jordanian working class a few policy reforms to take the lid off the simmering kettle.

A full accounting of Western crimes against the Arab public necessitates removal of antidemocratic regimes, from Rabat to Muscat, and explicit adoption of a hands-off approach that allows unequivocal working-class self-determination across the Arab world.

Christian Sorensen is an Air Force veteran and a senior fellow at the Eisenhower Media Network (EMN), an organization of independent veteran military and national security experts.  Sorensen is the author of Understanding the War Industry. As a novelist and independent journalist, Sorensen focuses on war profiteering within the military-industrial-congressional complex. His work is available at www.warindustrymuster.com.

Featured image: Former Crown Prince Hamzah bin Hussein with half-brother King Abdullah II as they walk together in the funeral procession of Yasser Arafat, the Palestinian leader, in Cairo, on November 12, 2004. [Source: dailysabah.com]