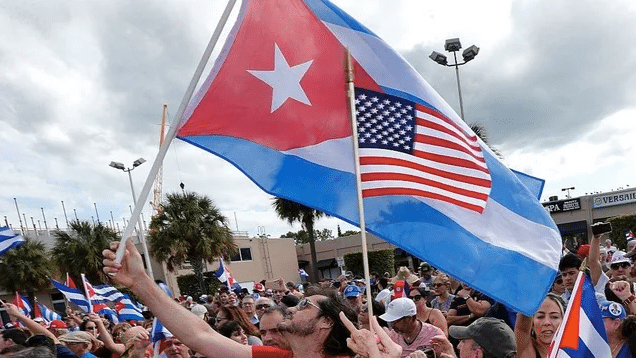 The airs and graces of optimism that are blowing around Cuba today rest on two premises: Trump’s electoral defeat and what Biden’s victory may mean for a potential process of rescuing the normalization of relations with Cuba that began in the final stage of the Obama administration. To the torrent of optimism among Cubans and some foreign observers, the need for a more adjusted weighing ofto the current realities and the potential changes for an effective rescue is necessary.

Among the most noteworthy optimisms, one can highlight, firstly, the presence of not a few actors present in the Obama Administration who, to one degree or another, were involved in the initial phase of normalization of relations with Cuba.

Secondly, the fact that the Biden Administration will resume the course initiated by Obama and will deepen it in those issues that were left pending, which some characterize as the model of Obama’s relationship with Cuba.

However, the foundations for such optimism still face not a few reservations and questions to be defined,. These do not seem to favor the expectations described above. Let’s examine some of those qualms and questions.

1. Trump’s defeat certainly implies a notable advance, but it is limited because the Democratic majority in the House of Representatives has seen its majority significantly diminished. In the Senate they have not been able to achieve the majority they had hoped for. Biden’s victory is thus a halfway victory, very much compromised by the advances of the Republicans in the legislative branch, with strong predominance still of the Trumpist current in the ranks of the Republican Party.

2. Biden faces a domestic and world situation that is very different from that of Obama, where the priority of the great global issues must be prioritized. In addition, there his affirmation “that his time in office would not be a ‘third Obama term’ because we face a totally different world than we face in the Obama-Biden administration.” This emphasizes that we are “Ready to deal with the world, not retreat from it.” In this different world than the one Biden faces, Cuba is still a very relative micro-issue.

3. Precisely because it is a micro issue with a low conflict profile and low cost, it points to the hypothesis that it will be easy for Biden and his team to resume the frustrated agenda initiated by Obama in the short term. In other words, it is an easy problem to address and solve so a rescue can be contemplated soon.

4. As for the foreign policy team that Biden has been forming up to now, it is nourished by figures that some sources in Washington characterize as centrist or moderate like “Clinton and Obama retreads.” Meanwhile progressive sectors within the Democratic Party “feel cheated” despite their active support for the Biden-Harris candidacy and “now they have been shut out of power.” These groups characterized as centrist focus more on the issue of military threats rather than on issues such as climate change and others (says Tara McKelvey, BBC White House reporter).

5. I emphasize these elements to try to differentiate, to define a certain nuance, that figures like Mayorkas, Sullivan and Haines along with Klain and Blinken, far from identifying themselves as part of Obama’s most intimate circle. Actually they belong to an orbit more linked to Biden’s “circle of trust” for more than a decade,. Some of them -as is the case of Blinken- can be characterized as a sort of “alter ego” of Biden in matters of strategic planning and global issues.

And from such a team, some recognized specialists – such as Andrew Bernard, president of the Quincy Institute for Responsible Statecraft – point out that their marked uniformity and absence of diversity and differences “has a belief in American supremacy. This could lead to recklessness in their use of American military power (per a quite from BBC). It is not idle to note that the names of Susan Rice and Ben Rhodes – so important at the beginning of the normalization process initiated by Obama – are still conspicuous by their absence.

6. On the subject of Cuba, both Biden and Harris have repeatedly limited themselves to the following points: a. Fuller restoration of diplomatic and consular relations and representation; b. Removal of restrictions on the sending of family remittances; and c. Normalization of interactions and relations between families. These would represent steps of some importance, but they are extremely limited. The well-known expression “from the wolf a hair” may give a more accurate measure. But Biden, too, has not hesitated repeatedly to call the Cuban leadership a “thug” group, which is far from conducive to a constructive atmosphere of mutual respect.

7. From here on out, we will have to look at the new administration’s willingness and initiatives to dismantle both the executive and legislative architecture of economic warfare that the Trump administration designed and applies to this day against Cuba. These range from ending Chapter III of the Helms-Burton Act when the time comes, a pattern followed by all previous Democratic and Republican administrations, to withdrawing that diabolical formulation that Cuba does not support the fight against terrorism.

No less important will be the reestablishment of the fullest validity for the system of 12 visas to authorize visits by American citizens to Cuba and the possibility of authorizing a normal flow of American tourism to the island and possible investments in the tourist industry as well as the suppression of the more aggressive provisions added by OFAC with respect to Cuba.

8. To all this must be added the most effective return to the twenty or so agreements and mechanisms for periodic consultations, seeking the establishment of a mechanism similar to that of Political Dialogue and Cooperation with the European Union. If progress were to be made in any of these directions, there would be every reason for optimism.

9. Many are the current priorities of greater scale and complexity for the global agenda of the Biden-Harris administration. In these horizons, the micro issue of Cuba does not exactly fit as an urgent priority or something similar unless this new administration is inclined towards a revision and updating of its projection and hemispheric links.

10. In the coming months, five questions of singular importance are presented to evaluate the most positive or most negative directions that US-Cuba relations could take. They are these:

—-Who gets the two senatorial votes (January 5, 2021) of the State of Georgia? They are critically indispensable for winning or losing the majority in the Senate, a legislative body of enormous importance in matters of foreign policy.

—How will the next legislative elections of December 6 in Venezuela be received and “punished” by Washington beforehand, described as dictatorial fraud? To this will be added whether or not if Cuba seconds and supports the above-mentioned fraud. Then there’s the quota of sanctions that can be applied to Cuba for such support in the framework of a hemispheric climate that is perceived today as passing through important levels of popular anti-oligarchic movements such as the cases of Colombia, Chile, Peru, Brazil, Bolivia and on which it is perceived a supposed destabilizing influence on the part of Cuba.

—To what extent will such a context influence the new Biden-Harris administration’s perceptions of Cuba’s role in all this? How will this be reflected in the upcoming Summit of the Americas in the U.S.? It is hard to imagine at this point that such a summit would serve as a reunion between US and Cuban leaders in the style of the one that took place in Panama between Presidents Obama and Raul Castro.

—Will Florida continue to be the endless source of “Democratic anguish” over winning the Cuban-American and Latino negative vote expressed on November 3 for the mid-term elections in 2022 and how will this reshape the approach to a possible more complete normalization of U.S.-Cuba relations? The evidence seems to suggest that it will.

—How will the agreements and changes emanating from the upcoming VIII Congress of the Cuban Communist Party, to be held in April 2021, be interpreted in Washington and by the new president’s team?

In short, in such a large and complex context, it is very difficult to imagine how the architecture of the sanctions added by Trump will be dismantled and how the solutions left in the inkwell of Obama will be promoted… Such a scenario conceived in the short or medium term seems highly improbable, limiting any progress to the benefits that could be derived from the three points sustained until today by Biden-Harris on the micro-Cuba issue.

Translated and edited by: Walter Lippmann for CubaNews.