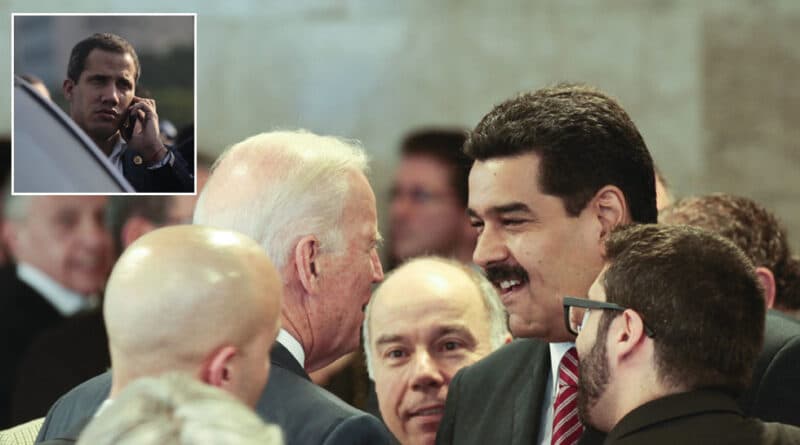 December 19, 2020.-  The Biden administration has reportedly been refusing to talk to Juan Guaido, the man the US considers to be Venezuela’s legitimate president, and may drop the demand for President Nicolas Maduro to step down from power.

The incoming Democratic government in the US will take a somewhat new approach to Venezuela, a nation that the Trump administration designated as part of a Latin American “troika of tyranny” and pounded with relentless sanctions. According to Bloomberg, Joe Biden is willing to negotiate with President Maduro and is not setting his resignation as a precondition, unlike Trump.

The Biden administration will offer sanctions relief in exchange for “free and fair elections” and other concessions, the report said, adding that the US will seek assistance from foreign backers of Venezuela, including Russia, China, Iran and Cuba.

Whatever policy change the Biden administration may bring, it is unlikely to be drastic. Venezuela was sparsely sanctioned under the Obama administration, and while Biden is said to be reviewing how Trump used the tool, he reportedly plans only to “recalibrate” the US sanctions regime, withdrawing some of the punitive measures, but possibly imposing more in some cases. Elliott Abrams, Trump’s envoy on Iran and Venezuela, suggested that the Biden administration should appreciate Trump’s heavy-handed approach because “it strengthens their hand,” in a sort of bad-cop-good-cop game against targeted nations.

Washington significantly ramped up sanctions on Venezuela in 2017, crippling its oil export revenue, cutting it from international financial markets and otherwise undercutting its economy. In January last year, it supported Juan Guaido, then little-known freshly-appointed head of the opposition-controlled National Assembly. He declared himself “interim president” of Venezuela, alleging that Maduro’s reelection as the head of the nation had been rigged.

American patronage allowed Guaido to quickly raise his international profile, getting Western recognition of his claim for presidency and laying claim to the foreign assets of Venezuela. He was even invited as a guest of honor to Trump’s State of the Union address in February, winning a bipartisan standing ovation.

However, Guaido’s multiple attempts to actually seize power in Caracas by instigating street protests, staging a military coup and allegedly hiring a mercenary crew to kidnap Maduro all failed, embarrassingly.

The justification for his bid to represent the Venezuelan people became even more shaky after this month’s parliamentary election. Maduro supporters won it in a landslide, while some opposition groups boycotted the ballot altogether. The Guaido-led opposition organized an alternative “popular consultations” vote, burning some ballots in the aftermath to supposedly protect the identity of participants.

Amid continued demonstrations of incompetence and in the face of allegations of corruption in his team, even veteran opposition politicians in Venezuela are now vocally sceptical of Guaido personally. Former opposition candidate for the office of the president, Henrique Capriles, openly called on foreign nations this month to ditch him. This attitude seems to be shared by the Biden team, which, according to Bloomberg, has been refusing to take calls from Guaido since November.

US sanctions have taken a heavy toll on Venezuela, triggering a mass exodus of refugees and making it impossible for the government to fund many of its socialist programs. Maduro had to renege on some of the policies of his predecessor, Hugo Chavez, and offer concessions to business interests in an apparently successful attempt to win over less-radical factions in the opposition.

After Biden secured his place the White House, Maduro said that despite a “minefield” left behind by Trump, he was ready to work with the upcoming administration. But he indicated that he had little hope for big changes, considering the Obama record on Venezuela. The proposed reengagement may prove a bit awkward to materialize, considering that the Venezuelan president is a wanted man in the US, with a $15 million bounty on his head over an accusation of “narco-terrorism.”