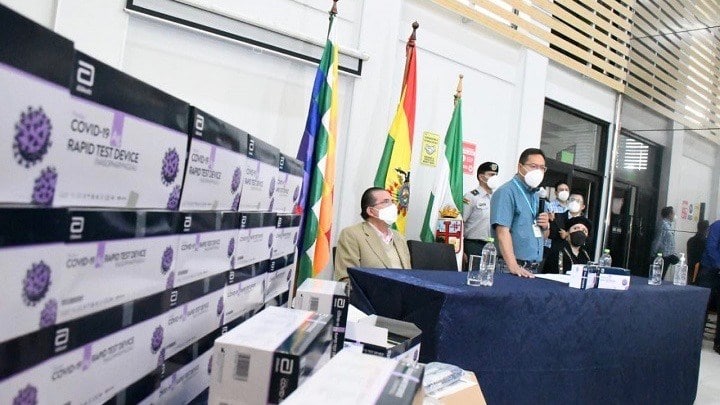 Under the leadership of Luis Arce, Bolivia has intensified efforts to combat and contain COVID-19, increasing testing and now taking action towards guaranteeing the vaccination of the population. Photo: Ministry of Health, Twitter

Bolivia’s State Agency for Medicines and Health Technologies (AGEMED), on January 6, approved the emergency use of Russia’s Sputnik V vaccine. The vaccine was registered under the emergency use authorization procedure based on the results of phase 3 clinical trials conducted in Russia, without additional trials in Bolivia.

A day before, on January 5, Bolivia’s health ministry approved using Russia’s Sputnik V and China’s CoronaVac vaccines against the COVID-19. The vice minister of epidemiological promotion and surveillance, María Reneé Castro, reported that the decision was taken in accordance with the recommendations of the National Committee on Immunization (CNI).

Castro reported that the CNI carried out an assessment of available vaccines against COVID-19 and after evaluating the technology platform, the information available and the logistics required, among other parameters, concluded that these two drugs are more suited for the country.

“The first vaccine that has been rated by them with the highest value is that of Gamaleya, Sputnik V. It is followed by Sinovac’s CoronaVac, and the last in line is Pfizer, because it needs a specific cold chain and its technological platform is not known in our health system,” Castro told the Agencia Boliviana de Información (ABI).

Bolivia is a part of the COVAX initiative, a global access fund for anti-COVID-19 vaccines, and with its share, the country hopes to vaccinate up to 20% of its population in the first quarter of this year.

On December 30, President Luis Arce informed that the government authorities had signed a contract for importing 5.2 million doses of Sputnik V and that the initial batch of vaccines would arrive in January.

“With the signing of the contract with the Russian Direct Investment Fund, Bolivia will acquire 5.2 million Sputnik V vaccines that will arrive in the country from January. We are working to immunize up to 80% of the population, who will receive the dose free of charge,” wrote the head of state in a tweet.

The Russian Direct Investment Fund (RDIF, Russia’s sovereign wealth fund) also confirmed that it would supply the country with its two-dose Sputnik V vaccines, which would be sufficient to immunize 2.6 million Bolivians. By March, the country will receive 1.7 million doses, and the rest will be received in April and May.

Sputnik V vaccine has proven to be one of the best drugs to immunize against COVID-19. In the third and final phase of clinical trials in Russia, it has shown an efficacy of 91.4%. The results obtained in Russia were also accepted by regulators in Serbia, Belarus and Argentina to register Sputnik V and begin the vaccination of the population. In Serbia the vaccination started on January 6, 2021, in Belarus on December 29, 2020 and in Argentina on December 28, 2020.

Bolivian authorities are also actively negotiating with Sinovac to purchase the CoronaVac vaccine in order to ensure sufficient immunization.

CoronaVac proved to be effective in the third phase of clinical trials conducted in Brazil in December, 2020. It showed efficacy between 50% and 90%. The final full trial results are expected to be released sometime this week. The Sinovac asked Brazil’s Sao Paulo state government’s Butantan Institute to delay releasing precise efficacy data for the vaccine, while it consolidates data from global trials (Indonesia and Turkey).

Bolivia is currently experiencing a second wave of COVID-19, with more than a thousand positive cases per day according to the national epidemiology directorate.

To contain the outbreak, the government has increased testing to identify cases. It has also activated artificial surveillance mechanisms in various parts of the country to monitor crowds and keep a check on social distancing measures.

On January 5, President Arce informed that the subnational government funds have millions to hire health personnel and face the pandemic and asked departmental and municipal authorities “to analyze the budget of each department and not to delay the attention to the population.”

Featured image: Under the leadership of Luis Arce, Bolivia has intensified efforts to combat and contain COVID-19, increasing testing and now taking action towards guaranteeing the vaccination of the population. Photo: Ministry of Health, Twitter