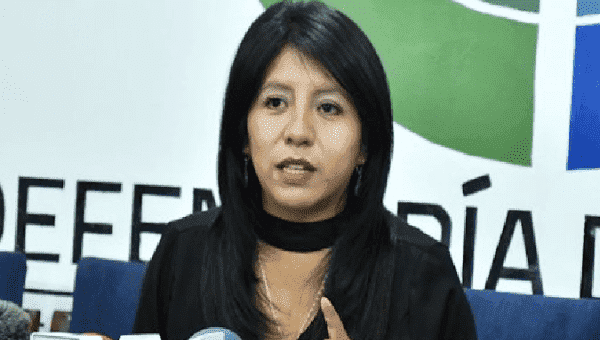 August 27, 2020.-  “We ratify our commitment to continue working for the defense of human rights,” Cruz stated.

Bolivia’s Ombudsman Nadia Cruz Thursday denounced threats and violent actions against her and her staff and asked the coup-born regime led by Jeanine Añez to halt these events.

She assured that the interim government’s allies have threatened her over the last nine months. All this has happened with the complicit silence of the Attorney General’s Office.

Cruz also mentioned that, besides aggressively insulting her officials, far-right militants recently tried to climb over her headquarters’ walls to reach her office.

These groups, which act without being arrested by the National Police, carried out similar actions against her institution when Evo Morales was forced out of the presidency last year.

#IACHRHearings #Bolivia🇧🇴 #HumanRights in the #ElectoralContext The Office of the Ombudsman presents information on human rights violations in the electoral context of 2019 and requests that the facts be investigated and victims are fully repaired #175PeriodIACHR pic.twitter.com/cS3VjzxvL2

The Ombudsman Office rejects violent demonstrations because these actions threaten the officials and citizens who are waiting at their institution.

“We ratify our commitment to continue working for the defense of human rights. We will not give up because of these events, which have a clear political motivation,” Cruz stated.

Previously, she filed a complaint with the Public Prosecutor’s Office regarding the attacks and demanded that expedited investigations be carried out to punish the perpetrators.