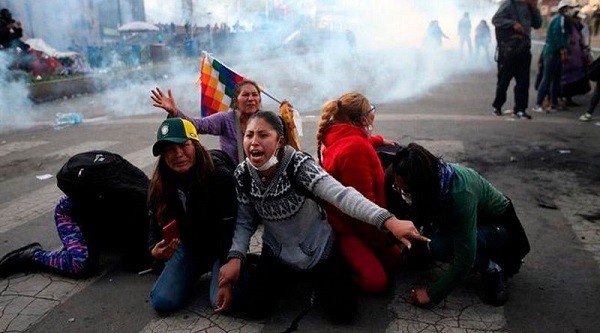 In the face of the complicit silence kept by the media, it is necessary to establish, before national and international public opinion, the five elements evidencing that the army and the police were the ones who executed the genocide in Senkata and Sacaba:

1. First, there are the testimonies left by the eyewitnesses of these facts. These testimonies have been presented before the Inter-American Commission on Human Rights and other international commissions. These are very detailed versions of several witnesses to the events. They are coincident in several aspects, such as the fact that the army in Senkata arrived at the place and, without issuing any warning, began to repress all those who were in the place, without distinguishing whether or not they were protesters, with gas, bullets and pellets indiscriminately. Several of these versions suggest that there was also shooting from helicopters. In the case of very detailed and coinciding versions, they enjoy a lot of credibility.

2. The second proof is the total absence of research around these massacres. In this regard, the government has indicated that the deaths were caused by firearms whose caliber does not correspond to that used by the Armed Forces and the Police. With this argument they put an end to their alleged investigation, without even realizing that what matters is to clarify who were the ones shooting at the mass of people. They were content to “prove” that it was not the army and the police. Then who was? The coup government has not noticed that its silence around this question speaks volumes, because, if they were innocent as they claim, then they should be determined to find who were the ones who shot at those Bolivians. On the other hand, their supposed argument is extremely weak. It is assumed that who commits a crime violates the law, while their argument is of the type: it could not be the army and the police because they respect their rules of use of a certain caliber. More or less then their argument is reduced to saying that it could not be the army or the police because they comply with the law. The alleged argument is ridiculous. In addition, the use of that argument becomes one more indication that it was indeed the army, given that in the past, military dictatorships used that same argument to pretend to escape their responsibilities. For example, that same argument was used by the government of the dictatorship of Hugo Banzer when he massacred peasants in Tolata and Epizana, in 1976.

3. The third element refers to the conditions that the government placed on relatives of the victims to grant them compensation. The conditions consists in requiring that the families of the victims do not continue with their complaints in international venues. These conditions strictly implies an implicit recognition that the massacres were effectively committed by the army and the police, since there is no rational reason for a government to request that complaints not be pursued in international settings, unless it is the same government that has committed them and, therefore, intends to hide those events.

4. The fourth is the Supreme Decree issued by the government one day before these massacres were committed and which was called by the critics a license to kill, since it exempted the army and the police from criminal responsibility, in the work that these entities exercise to safeguard “public order.” There is no doubt that this decree is illegal and unconstitutional, since no decree can contradict what the law mandates, let alone the constitution. But beyond the illegality of the decree are the real reasons why a government issues a decree of this scope. What reason would there be for issuing a decree of this nature? The only possible explanation is that the same army demanded that it be issued so that the political authorities of the moment (read, the coup plotters) assume responsibility of the order they gave to police and military to repress social protests.

5. The fifth proof is the media ban that has been imposed on the subject. Given the seriousness of what happened, it would be natural for public opinion, through the media, to follow up on the investigations carried out on the matter. However, once the media transmitted the version that the deaths were caused by firearms whose caliber does not correspond to that used by the army or the police, then the whole issue was submerged in the most absolute silence. What is the reason for the media to conform to such an absurd argument? One possible reason is that they are threatened and pressured by the de facto government that is responsible for those massacres. The question that fits in this regard is, to what extent the media are really threatened or is it that their complicity in the coup is such that they silence themselves on their own.