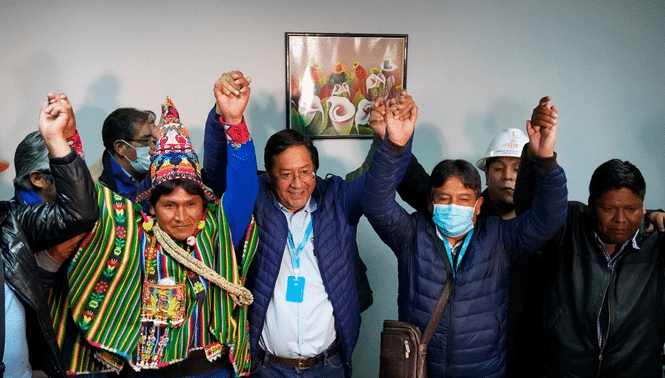 The elections demonstrated that the MAS is the only existing social force in all of Bolivia.

The resounding victory of the MAS in the Bolivian presidential elections ratified the social density of the political organization of the Bolivian peoples .

The figures took even the most rigorous analysts by surprise: the surveys carried out by four of the five most renowned consulting firms in Bolivia anticipated a vote for the MAS binomial that oscillated around 45 percent of the votes and close to 34 percent. for his most immediate pursuer, Carlos Mesa.

In other words, Evoism voters concealed their intention to vote while at the same time overestimating the real support base of Comunidad Ciudadana.

The victory was much broader than expected, as assured by the two consultants certified by the government to carry out the “exit points”: CIESMORI and Jubileo. Both assign to the Arce-Choquehuanca formula a proportion that oscillates around 52 percent of the votes and Mesa-Pedraza only 31 percent . Some observers venture that the final figure will be around 55 percent.

In the early hours of the morning, a tweet from the dictator Jeannine Añez said that “due to the data we have, Mr. Arce and Mr. Choquehuanca have won the election. I congratulate the winners and ask them to govern with Bolivia and democracy in mind. ” (That is, to rule as she did not). At noon Carlos Mesa recognized the triumph of the MAS.

The official counts of the 35,000 polling stations have not yet been published and it would be foolish to think that the imperialist enemy and its allies on the racist right will respectfully bow to the verdict at the polls .

Difficult (but not impossible) that there may be surprises or last minute maneuvers to frustrate the will of the Bolivian people. If the difference had been less, say about twelve or thirteen points, surely the bandits under Luis Almagro’s command would have repeated what they did just a year ago and stole the election; but with a difference of twenty points or more the maneuver would be thwarted by its intolerable obscenity.

Anyway, the official figures will only be released on Wednesday and then we will know what the next move from the right is.

The elections demonstrated that the MAS is the only existing social force in all of Bolivia . Carlos Mesa demonstrated that it is an electoral seal, a conspiracy of groups that only had in common their hatred of Evo and what he represents. And Luis Fernado Camacho is the leader of an important social force whose stronghold is Santa Cruz de la Sierra. But outside that department – which is equivalent to a third of the national territory – its gravity is very low. Building a right with solid foundations at the national level is an arduous task, which in Bolivia, even with the terrorist violence of its dictatorship, the complicity of judges and prosecutors, and the support of the media sewer at the service of the empire, proved to be a mission doomed to failure.

The deep political crisis in which the United States is debating on the eve of a complicated presidential election reduced the role of “the embassy” and limited its scope for action. And the local right – in Bolivia as in Argentina and throughout Latin America – without the guidance, money, and media and legal resources that Washington manages, there is little it can do.

The strategic power plants on the right have a global project (compare, for example, the demonstrations and slogans of the “anti-quarantine” and “anti-infection” in the most diverse countries) and work to prevent the stabilization of progressive governments or the inauguration of one of that political sign. Of course the story is capricious and friend of giving surprises. Who would dare to discard the idea that in that heart of South America that is Bolivia, the sun has just risen whose rays will illuminate the next elections in Chile, Brazil, Paraguay, Venezuela and the presidential elections in Ecuador, in February 2021? Perhaps, without realizing it, we are witnessing a historical turn unthinkable until a few weeks ago.