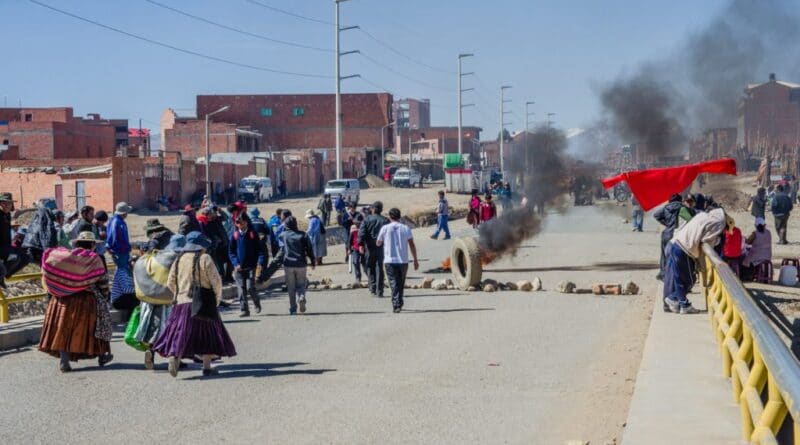 Now that a new date for elections – 18 October – is irreversible, Bolivia has once again narrowly avoided civil war. Jeanine Áñez was installed as president in a coup last November with Brazilian, US and Bolivian military support, following the overthrow of the democratically elected government of Evo Morales and the Movement towards Socialism (MAS). Áñez promised new elections within ninety days. At the end of July, they were postponed for a third time.

Mostly indigenous, mostly rural protesters took to the streets. They set up roadblocks, a tactic that had brought the government of Gonzalo Sánchez de Lozada to its knees in October 2003. Last month’s blockades shut down six of the country’s nine departments. In Santa Cruz, Cochabamba and La Paz, paramilitary groups on motorcycles tried to break through them.

Some of the protesters, especially young people, were also armed. Many of the protesters were injured; very few (if any) of the paramilitaries. Miraculously, there were no deaths. The military weren’t authorised to slaughter protesters with impunity, as they did last November, when they killed at least 23 mostly indigenous people in Senkata and Sacaba, according to a recent human rights report issued by Harvard – not an institution known for its support of Morales.

Most of the blockades were controlled not by the MAS, but by the Aymara communities of the western highlands around La Paz, organised in their peasant trade union confederation; the Federation of Neighbourhood Councils in El Alto; the miners and peasants of Potosí and Sucre; the trade union federation; and the Pacto de Unidad, a group of grassroots organisations affiliated to the MAS.

In the western highlands, the Aymara leader Felipe Quispe returned to centre stage, cutting La Paz off from its hinterland and calling for indigenous self-government, raising the spectre of the Túpaj Katari rising of 1781, which nearly brought down Spanish colonialism.

Rumors in La Paz that the government was planning to flee to Santa Cruz proved untrue. Yet the idea was not far-fetched. On 5 August, Branko Marinkovic, one of the architects of the coup last October, was named minister of planning. From 2007 to 2009, he was the head of the Comité Cívico de Santa Cruz and leader of the blockades and secessionist calls against the Morales government. In 2010 he fled to Brazil, returning to Bolivia earlier this year. The day before his cabinet appointment, paramilitary groups from the neo-fascist Unión Juvenil Cruceña attacked a blockade in Guarayos, where Marinkovic owns land. His protégé Luis Fernando Camacho, the leader of the UJC from 2003 to 2007 and head of the Comité Cívico de Santa Cruz last year, has been running operations on the ground against blockades in the Santa Cruz region. He is standing as an independent candidate for president.

Discussions between Añez and social movement representatives broke down on 9 August. The government returned to its previous confrontational stance, threatening to remove the blockades by force, arguing that they were starving urban hospitals of oxygen and ventilators (a few months ago Áñez’s health minister was forced to step down after a price-gouging scam involving ventilators). An untold number of people have died because they did not have access to oxygen.

As in 2003 and 2019, the pretext for the use of lethal military force against unarmed protesters was the lack of fuel and food in La Paz, which again grew scarce, with prices skyrocketing. Caravans of oxygen, meanwhile, arrived in El Alto, unable to pass through to hospitals in the capital until the blockades were lifted on 15 August, after a law was passed confirming the 18 October election date, and criminalising any further attempts to change it. Facebook has disabled a series of accounts backing Áñez’s government with disinformation campaigns, which in any case were probably too little, too late to help her faltering candidacy.