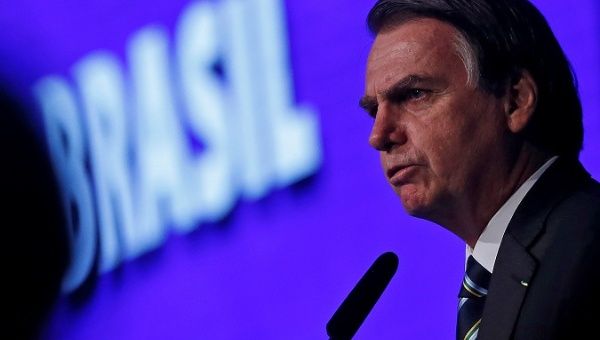 Brazilian human rights defenders could file a complaint against the president’s censorship before the United Nations.

The person in charge of making the video was removed from his position Thursday.

“If you want to come to have sex with a woman, go ahead,” Bolsonaro said during a breakfast with Brazilian reporters. “But we cannot let this place be known as a paradise for gay tourism. We have families,” said the head of state in reference to his eliminating the bank’s ad, according to The Guardian.

The president has a long history of homophobia. In 2011 he told Playboy magazine: “I would be incapable of loving a homosexual child. I’d rather have a son of mine die in an accident than appear with a mustache next to him.”

The Bank of Brazil President Rubem Novaes said that he and Bolsonaro agreed that the video should no longer be broadcast and it was taken down from public consumption. They also agreed on the “exit” of the Banks’ Communication and Marketing Director Delano Valentim.

“Bolsonaro complained he was bothered by the advertisment’s ‘excess of diversity.’ The video was then censored,” tweeted Gabriel Issagawa, a young Brazilian actor.

RELATED CONTENT: ‘We Are Equal’: Trans Woman Running For Prime Minister of Thailand

“The black community has spent a lot of time increasing respect for diversity. This video ad represents a conquest for the excluded. [Bolsonaro’s] decision shows how wrong he is,” said Fei David, member of Educafro, a Brazilian rights organization which fights for increasing black poor people’s participation in labor markets and public universities.

Publicly-controlled Banco do Brasil ran an ad featuring a hip, young and partially LGBTQ cast and a furious President Bolsonaro, who considers himself “proudly homophobic”, ordered the bank to fire its national marketing director. Here is my commentary. pic.twitter.com/YfECXghnFt

According to O Globo newspaper, Educafro intends to file a complaint against the Bolsonaro’s censorship of the video before the United Nations.

During his political career, Bolsonaro has unleashed a long list of racist, mysognist, and homophobic statements, and has introduced several policies that encroach on Indigenous rights and territorial autonomy.

After three months in the presidency, the former captain is disapproved of by less than 30 percent of the population. According to Brazilian Institute of Public Opinion and Statistics (IBOPE) 58 percent of the Brazilians, Bolsonaro is either “bad” or the “worst president the country has ever had,” as one poll revealed.

Meanwhile, former leftist President Luiz Ignacio Lula Da Silva, who remains a political prisoner at Curitiba’s federal prison, is seen as the best president in Brazilian history, according to 48 percent of the population.