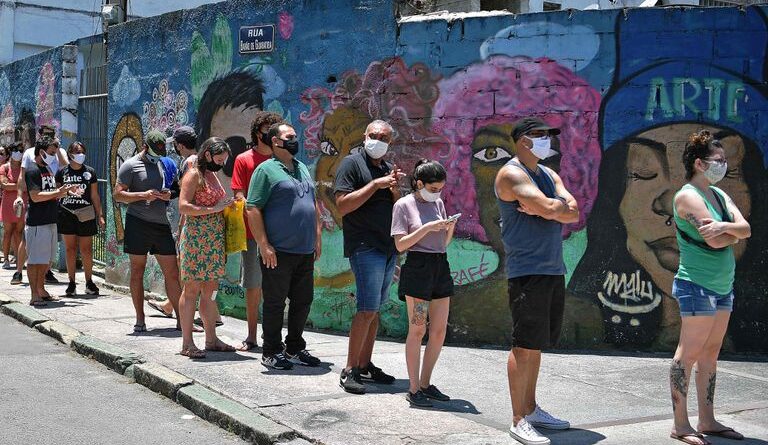 The elections, held amid criticism against the president for his handling of the pandemic, have registered the lowest level of participation in recent decades.

The center-right prevailed in the first round of the municipal elections on Sunday in Brazil, and the candidates of the far-right of Jair Bolsonaro were the great losers on electoral day, which registered the lowest turnout in recent decades.

In the midst of the pandemic, which has already left more than 165,000 deaths in that country, and amid severe criticism of the Brazilian president’s handling of the coronavirus crisis, 148 million Brazilians were called upon to elect mayors, deputy mayors and councilors for the next four years. The traditional parties of the right prevailed over the far-right and leftist option of the Workers Party (PT), led by former president Luiz Inácio Lula da Silva.

After completing the voting in twenty-five capitals of the 5,569 Brazilian municipalities, seven cities have new mayors and eighteen will have to go to a second round, as the candidates did not get more than 50% of the votes. On the other hand, Macapá, in the northern state of Amapá, had a power failure that prevented it from carrying out the process and in Brasilia, according to the Constitution, mayors or councilors weren’t elected.

The political organizations with the most elected mayors were the centrist Party of the Brazilian Democratic Movement (PMDB), with 755 representatives ; the right-wing Progresistas, with 666, and the PSD with 631. On the other hand, the PT barely obtained 174 authorities.

As for Sao Paulo, the largest and most populous city in Brazil, the current center-right mayor, Bruno Covas, will contest re-election with the socialist Guilherme Boulos. With 99.67% of the polls counted, Covas obtained 32.85% of the votes, while Boulos obtained 20.24%.

The percentage of votes scrutinized until last Sunday night by the Superior Electoral Tribunal (TSE) shows that the Bolsonarista option crashed in the first round.

Bolsonaro promoted thirteen mayoral candidates in different Brazilian cities. Of this group, only Mao Santa, a candidate for re-election in Parnaíba (Piauí), and Gustavo Nunes, in Ipatinga (Minas Gerais), were elected this Sunday. Two others, who underperformed their contenders, will go to the second round.

The great setback for the president also occurred with the forty-five nominees for councilors that he supported, since only seven were elected.

RELATED CONTENT: US Election: What’s at Stake for Brazil

In a tweet, the Brazilian president avoided referring to his failure, said that the left had suffered a “historic defeat” and affirmed that the “conservative wave of 2018 came to stay.”

Second round and abstention
In the eighteen capitals where the mayor will be chosen in the next elections on November 29, the party with the greatest presence is the PMDB, with nominations in seven cities. They are followed by Progressives, the Brazilian Socialist Party (PSB), the PSDB and Republicans (right-wing). These four parties will have candidates in three cities.

Nor does the left seem to be the proposal that offers the greatest option for the new elections, since the PT will barely have nominees in two cities, as will the Socialism and Freedom Party (PSOL) and the progressive Labor Democratic Party (PDL).

Voters from fifty-seven cities will return to the polls on the last Sunday of this month. This figure represents 60% of the total of the ninety-five Brazilian municipalities with more than 200,000 voters where it was possible to carry out a ballot.

This vote had the highest number of abstention, null or blank votes since 1996, when electronic voting began in that country. With 99.7% of the polls counted, the TSE concluded that the figure was 30.6% . This percentage represents more than 45 million voters who abstained from participating, while four million voted blank and seven million cast invalid votes.