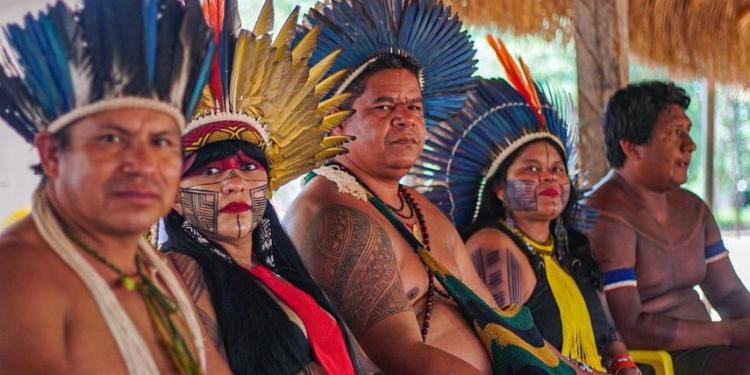 Some 600 Indigenous leaders representing 45 peoples are denouncing in a manifesto that “a political project of the Brazilian government of genocide, ethnocide and ecocide is underway,” and are announcing ample mobilizations throughout 2020 to oppose the policy of President Jair Bolsonaro. Among these, they want to re-launch the Forest Peoples’ Alliance, a coalition of organizations that is heir, among others, to the struggles of legendary trade union leader Chico Mendes, who was assassinated in 1988.

The Indigenous leaders have met from 14 to 17 January at the Mebengokrê Peoples’ Meeting, where Chico Mendes’s daughter Ângela Mendes has been one of the most prominent voices. The manifesto demands respect for social, economic and cultural rights of Brazil’s Indigenous peoples, including the environmental protection of their territories, subject to an ever-increasing deforestation —which, it is worth noting, began in the 1960s and has gone on under governments of either political shade.

The meeting, held in the Indigenous Land of Capoto Jarina (Mato Grosso), has been one of the largest meetings of Indigenous representatives in recent years in the South American country. Among others, it has been convened by Raoni Metuktire, chief of the Kayapó people and environmental activist since the 1960s. Many people may remember him for the global awareness campaign he conducted in 1989 along with pop star Sting.

Raoni holds Bolsonaro responsible for the fires that have been hitting the Amazon forest. Before that, the Kayapó leader had also opposed the policies of former left-wing presidents Lula da Silva and Dilma Rousseff, in that case against the construction of the Belo Monte dam on the Xingu River —which was finally built.

The Articulation of the Indigenous Peoples of Brazil (APIB), which has also participated in the Mebengokrê Peoples’ Meeting, is organizing another summit, the Indigenous Leaders’ Meeting, in Sao Paulo, from 20 to 22 January. APIB says it will be analysing more in depth the emergency situation in the Amazonia and will discuss a schedule for popular protests throughout 2020.

The Indigenous movement’s perception of the need to strengthen itself and retake its alliance with small, local non-Indigenous producers and farmers —as was the case with Chico Mendes— has much to do with plans by the Brazilian government to (further) exploit the Amazon rainforest and, very particularly, the lands reserved for the Indigenous peoples. O Globo newspaper published 10 days ago that the government is drafting a bill that will allow the exploration of Indigenous lands with the aim of allowing mining exploitation, construction of dams, search for oil and gas, and introduction of genetically modified crops. The bill provides for consultation with Indigenous peoples prior to giving green light to such economic activities, but does not give them a veto right.

Indigenous territories occupy some 13 per cent of the surface area of Brazil, and are mainly found in the Amazon region. Although the Constitution recognizs the Indigenous peoples’ ownership of those lands, in practice they are often illegally occupied by settlers and companies that exploit their natural resources.

According to official government data, 1 million Indigenous people live in Brazil, 0.6% of the total population.

Constant killings of their leaders —a common problem in many countries of Central and South America— is another vector of mobilization of Indigenous peoples. In 2019, seven Indigenous leaders were murdered in Brazil, the highest number in the last two decades. The Indigenous movement links that increase to the hostility against Indigenous peoples promoted by Bolsonaro.

One of most vocal APIB leaders in denouncing this is Sônia Guajajara:

Guajajara was one of the leading voices in the APIB’s tour of several European cities in October and November 2019 seeking to denounce that wave of violence and killings against Indigenous peoples.