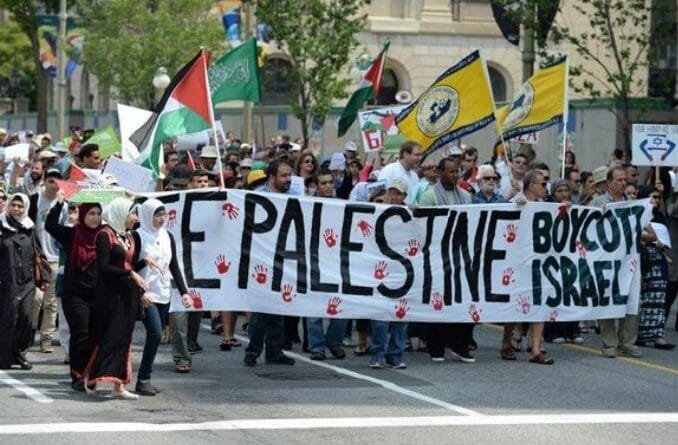 The New Democratic Party of Canada (NDP) voted yesterday in favor of a motion brought forward by a coalition of Palestinian and Jewish activists calling to amend its policy book to include a boycott of products emanating from illegal Jewish settlements as well as an arms embargo on Israel.

The motion comes after years of many within the party demanding that the NDP take a clear stance on Palestine-Israel.

The @NDP just voted to boycott illegal Israeli settlements and impose a ban on weapons sales with Israel!

CONGRATULATIONS to my amazing team who worked so hard on this! We cry and celebrate now. pic.twitter.com/VFVXv1aUqu

“The adoption of this motion today was a result of a groundswell of support from the grassroots membership,” said Amy Kishek, one of the lead organizers for the Justice and Peace in Israel Palestine Resolution at this weekend’s NDP convention. “Not only is this position hugely popular with the NDP membership but it is something that is supported by the vast majority of the Canadian labor movement as well as the Canadian population at large.”

A 2017 poll done by EKOS Research confirmed that in the context of Israel’s ongoing human rights violations, 78 percent of Canadians believed that the Palestinian call for a boycott is reasonable.

As of today, 2 parties in Canada’s Parliament (@canadiangreens & @ndp) are calling for an arms embargo on Israel and a ban on the importation of products made in #Israel’s illegal settlements.

When will @justintrudeau and @liberal_party finally stand on the side of human rights? https://t.co/ucunrgAyck

The number was even higher among those who identified as NDP supporters at over 90 percent in support. The adopted policy today also has strong support among many of Canada’s major labor unions including the Canadian Labor Congress which represents over three million workers across the country.

“The adoption of this policy today firmly positions the NDP as one of the few parties demanding the end of Canada’s support for illegal settlements and suspending the flow of weapons to and from Israel until Palestinians are free,” said Geneviève Nevin, another organizer behind the successful resolution.

“In a time of unparalleled and intersecting social, environmental, and economic crises, it is of paramount importance that the NDP stands with and take direction from marginalized communities and those fighting for peace and justice everywhere.”

Featured image: A pro-Palestine protest in Ottawa, Canada, in 2014. (Photo: via Wikimedia Commons)