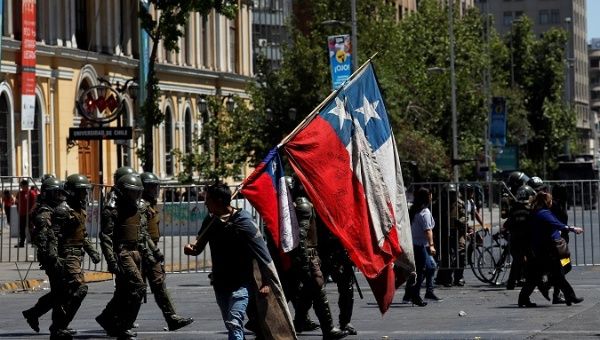 Protests in different cities around the country continued to take place with police deploying repression tactics of water cannon and tear gas.

Despite President Sebastian Pinera cabinet reshuffle Monday morning, Chileans angry at inequality called for more demonstrations this week in the biggest political crisis since the country’s return to democracy in 1990.

President Pinera replaced eight cabinet members Monday including his interior and finance ministers, a house-cleaning aimed at taming the biggest political crisis since Chile’s return to democracy in 1990.

On Monday Pinera sacked interior minister Andres Chadwick, his cousin and longtime confidant who came under fire last week for calling protesters “criminals.” He replaced Chadwick, a right-wing politician and Pinochet admirer, with Gonzalo Blumel, a presidency minister (chief of staff) and liaison with the legislature.

“Chile has changed, and the government must change with it to confront these new challenges,” Pinera said in a televised speech from the La Moneda presidential palace.

A week ago, small protests over a recent hike in subway fares quickly boiled over into nationwide unrest against the economic and political model in the country which was put in place by the dictatorship regime of Augusto Pinochet. Seventeen people have died and there have been more than 7,000 arrests.

Protests in different cities around the country continued to take place with police deploying repression tactics of water cannon and tear gas.

On Friday, a million Chileans marched through downtown Santiago demanding a change to the country’s social and economic model.

Pinera, a billionaire businessman, has promised higher taxes on the rich to help boost the minimum wage and pensions, lower the prices of medicines and assure proper health insurance.

But a Cadem poll published on Sunday found 80 percent of Chileans did not find his proposals adequate. On social media, Chileans were calling for more protests on Tuesday at the La Moneda presidential palace.

On the streets of Santiago Monday morning, many returned to school or work to find traffic jams, a hobbed metro, graffiti and trash and broken glass littering streets from days of riots.

Support for Pinera has plunged to just 14 percent, the lowest approval rating for a Chilean president since the country’s return to democracy three decades ago.