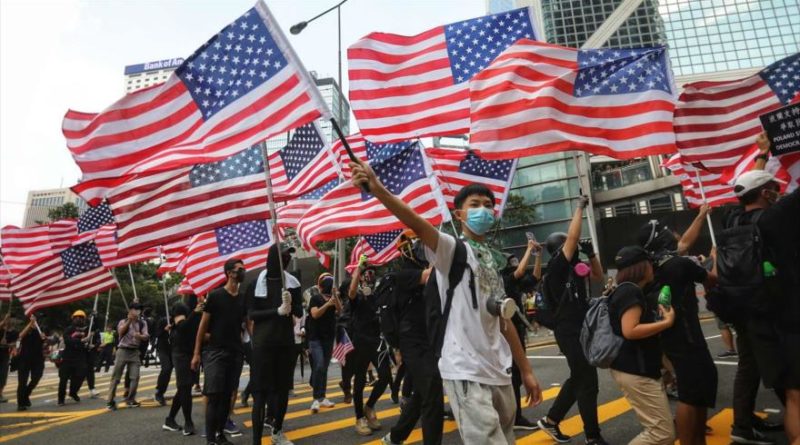 China denounces that several US NGO’s have been instigating so that violent protests did not decline in Hong Kong; a habitual practice of these entities.

As revealed by the Chinese newspaper Global Times on Tuesday, there is evidence of new contacts between protest activists in Hong Kong and members of US non-governmental organizations, with the alleged purpose of encouraging the continuity of violence.

This newspaper maintains that Adam Nelson, director of the National Democratic Institute (NDI) and Martin Lee Chu-ming, an Amnesty International (AI) employee, met at a restaurant in Hong Kong on December 10. with politicians, ex-legislators and other characters of the local opposition.

The purpose of the meeting, according to the Chinese media, was to coordinate how the US entity could continue to maintain support for extremist and violent activities in this British ex-colony, after being sanctioned by the Government of China on December the 2nd.

The NDI receives its funds from the National Endowment for Democracy (NED), the latter being an NGO with high involvement in the financing of destabilizing campaigns and training of activists to undermine the stability of several nations of the world, noted the report.

In this regard, Global Times recalled that between 1990 and 2018 the NED allocated 1.3 million dollars to opposition groups in Hong Kong and of that amount 450 thousand dollars were used to encourage acts of sabotage in the 2015-2018 period.

Faced with such a curriculum of instigations of these NGO’s to encourage violent, criminal and separatist events in the context of the six months of demonstrations and riots recorded in Hong Kong, Beijing has included them in its list of sanctions in order to counteract their destructive influence on the current social turmoil that runs the so-called Pearl of the Middle East.

This denounced practice is not exclusive to these two American nonprofit organizations, but others such as the United States Agency for International Development (USAID) and the International Republican Institute (IRI) English) also lend themselves to mere mechanisms of soft power of successive US governments in different regions of the world.

The United States using these NGO’s subtly tries to weaken the progressive governments of Latin America, the Middle East and Europe, among other regions, that do not bend to their imperial dictates to boost their political, economic and social interests.

There are no few attempts by Washington to intervene in the will of the sovereign and independent Latin American peoples through these aforementioned NGO’s that were created to carry out exactly what the US Central Intelligence Agency was doing for decades.

Washington in search of destabilizing democratic governments of Latin American countries spends millions of dollars annually to support political parties, trade unions, dissident movements and media outlets against these Executives such as those in Venezuela, and recently in Bolivia , whose legitimate Government , chaired by Evo Morales, was the subject of an undercover coup in mid-November.

In the Middle East, Americans making use of these NGO’s scattered throughout the region seek to establish a mechanism by which the United States interferes with the internal political affairs of these free and sovereign nations.

In this context, the NED, financed by the US Congress, from 2002 to 2006 granted about $ 200,000 to the Iranian-American National Council (NIAC) to strengthen “civic organizations” in Iran , preparing them to intervene in the demonstrations changing their peaceful course in violent riots.

With the passage of time, this praxis has intensified not only in Iran, but also in other countries such as Iraq or Lebanon , where there have been endless anti-government protests.

US plans subverts the democratic order in other nations. They also reached Russia, whose Government denounced in early July the subversive methods that USAID put into practice to promote Russophobia in the world, especially in neighboring countries.

In this situation, Moscow deplored that this US government tries to create an imaginary danger of “Russian interference” in other nations to boost a “desire to subordinate these countries to US influence, with which Washington seeks benefits so much geopolitical as economic ”, making it clear that USAID, expelled from Russian territory for 7 years , does not intend at all to create an environment of cooperation on the world stage, but serves as an instrument of the ideological struggle and imperial propaganda of Washington.