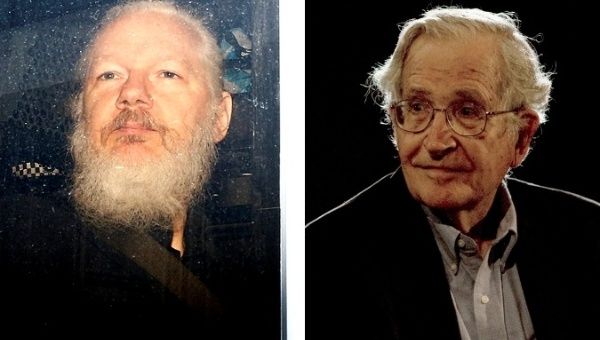 The world-renowned linguist and academic said that Assange’s arrest is just a new case of “efforts to silence” dissident voices.

U.S. intellectual Noam Chomsky voiced his concerns Friday over the arrest of WikiLeaks founder Julian Assange during an interview with Democracy Now, calling the situation a “scandalous in several respects.”

The world-renowned linguist and academic said that this is just a new case of “efforts to silence” dissident voices. Chomsky compared Assange’s arrest to Lula’s political imprisonment, focusing on the fact that both said and did things that “people in power don’t like”, so therefore they “have to silence it.”

RELATED CONTENT: End of Freedom of Speech in the West: Arrest of Assange, Creator of WikiLeaks

“Last September, Lula da Silva was the leading, the most popular figure in Brazil, who was almost certain to win the forthcoming election, put him in jail, solitary confinement, essentially a death sentence, 25 years in jail, banned from reading press or books, and, crucially, barred from making a public statement—unlike mass murderers on death row,” adding that “he’s the most important political prisoner in the world. Do you hear anything about it?… Assange is a similar case: We’ve got to silence this voice.”

On April 11, Wikileaks founder Julian Assange Ecuador seven-year asylum was abruptly removed and he was arrested by British police. Immeadlty the United States charged him of “computer hacking conspiracy.” Now his defense is fighting an extradition request to face the U.S. justice system, even though Ecuadorean officials have assured this will not happen.

Assange was even called a “miserable hacker” by Ecuadorean President Lenin Moreno. But his defense is strongly dismissing it, stating that he is a publisher and journalist, with more than 20 awards in the field. As Ben Wizner, director of the American Civil Liberties Union’s Speech, Privacy, and Technology Project has explained the “prosecution by the U.S. of Mr. Assange for Wikileaks’ publishing operations would be unprecedented and unconstitutional and would open the door to criminal investigations of other news organizations.”

However, Democratic Senator Joe Manchin told CNN that they are “going to extradite him. It will be really good to get him back on United States soil. So now he’s our property and we can get the facts and truth from him.”

On this regard, Chomsky said the fact the U.S. can manipulate the policies and actions of other nations is a scandal in itself. “The extraterritorial reach of the United States is shocking…why should the United States have the power to control what others are doing elsewhere in the world? I mean, it’s an outlandish situation,” he said.