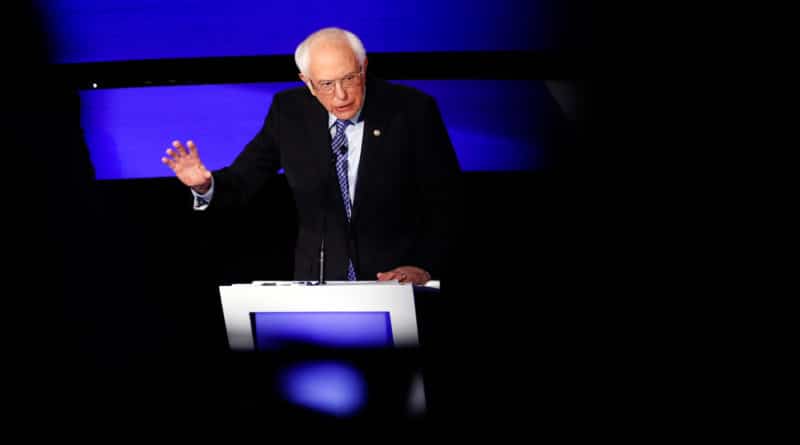 The top three trends on Twitter Wednesday morning across the United States were #CNNisTrash, #NeverWarren, and #WarrenIsaSnake.

CNN has been widely criticized for its perceived bias in moderating yesterday’s Democratic presidential debate in Iowa. With just three weeks before the first primaries, six leading candidates descended upon Des Moines last night to take part. But, as with previous debates, much of the public discussion centered on the organization, framing and bias of the organizers and moderators.

CNN asked Bernie Sanders, the most left-leaning of the candidates, if he thought he “owed voters an explanation” on how much his health plan would cost them and demanded to know “how will he avoid bankrupting the country” when implementing Medicare for All. Meanwhile, on trade, Massachusetts Senator Elizabeth Warren was questioned about a new deal with Canada and Mexico and asked “why is Sanders’ opposition to it wrong,” giving her a puff question with which to undermine Sanders.

Framing on every question is massively right-wing. They just accused @BernieSanders of bankrupting country when his proposal costs LESS than current system! How come they don’t ask Biden if he’s comfortable with letting 45,000 a year people die under current system? #DemDebate

Like in previous debates, CNN continually framed issues in a conservative manner, accepting right-wing talking points as true and attacking the left. While it appeared alarmed about the cost of a healthcare system that virtually every other advanced country in the world employs (and at a much cheaper price than a privatized American system), CNN asked 27 questions about the American military presence in the Middle East without even once considering how the U.S. would pay for these wars. Host Wolf Blitzer even tried to associate Sanders with Ayatollah Khamenei, noting that they have both called for American troops to leave the region, something that, in Blitzer’s estimation, led to the rise of ISIS. An exasperated Sanders laughed at the assertion before cautioning the American public about starting another “disastrous” war.

The debate was perhaps most notable for what analysts have described as the end of the non-aggression pact between the senators from Massachusetts and Vermont as Warren refused to shake Bernie’s hand and accused him of making sexist comments against her in December 2018, telling her that a woman could never be president.

MODERATOR: You’re saying that you never told Sen. Warren that a women could not win the election.

SANDERS: That is correct.

MODERATOR: Sen. Warren, what did you think when Sen. Sanders told you a woman could not win the election.

The bias in moderation reached comical levels for many when the candidates were asked about Warren’s assertions. Sanders was asked “You’re saying that you never told Senator Warren that a woman could not win the election,” to which he responded, “That is correct.” The moderator, Abby Phillip, immediately switched to Warren to ask “what did you think when Senator Sanders told you a woman could not win the election?” The blatant, childish attempt to redefine her hotly disputed assertion as a fact within one sentence drew hoots of laughter from the crowd, and Bernie alike, who all immediately noticed the rhetorical trick CNN was trying to play. Even Warren let out an embarrassed smile as she answered: “I disagreed.”

The allegations themselves were originally published by CNN on Monday, supposedly based on four anonymous sources who the network itself admits did not attend the meeting where the sexist comments are alleged to have been made. The sources were widely considered to likely have been members of Warren’s campaign, but even if they were not, hearsay from sources not even present at an event who refuse to go on the record should not have been published.

What makes the story particularly dubious is that Sanders has been calling for a female president since at least the 1980s and in 2016 beseeched Warren to run for the top office. Her gambit was roundly criticized in the press as a cynical and lazy attempt at turning her campaign around. The Boston Herald, Warren’s home newspaper, described the move as such:

“It is the classical political dirty trick from a desperate candidate — leak a damaging tidbit about your opponent to a friendly media outlet, wait for the fireworks to explode, then act like you’re the one who’s been wronged.”

Two hours of manufacturing consent, brought to you by @CNN #DemDebate

It is not clear if the attack was coordinated between Warren and CNN but what is certain is that they are paying a price for it. The top three trends on Twitter Wednesday morning across the United States were #CNNisTrash, #NeverWarren, and #WarrenIsaSnake, suggesting that the American public perceived the accusations in much the same way as the Boston Herald did.

Warren also performed poorly by other metrics. During the debate, Sanders gained three times as many new Twitter followers as Warren, who was also outgained by Amy Klobuchar, Tom Steyer and Pete Buttigieg. Warren’s campaign is on a downward trend; from a high of 27 percent national support in November, her campaign has now fallen to 16 percent, according to Real Clear Politics. Over the same period, Sanders has increased his support by five percentage points.

During the first hour of tonight's debate:

2. It was the single best fundraising hour of any debate so far.

3. During that hour we accounted for 43% of all money raised on ActBlue.

Sanders has been the subject of a sustained media attack since declaring as a presidential candidate in 2016, not least from CNN. Last year its fact-checking division claimed he was spreading false statistics by claiming the U.S. spends twice as much as any other country on healthcare. This was despite CNN itself making the same claim earlier in the year in a news piece. While reporting on a new poll showing Sanders three points ahead of his nearest challenger in New Hampshire, it claimed there was “no clear leader.” And after his heart attack, it photoshopped his skin shocking pink in video images, trying to emphasize the idea that Sanders was sicker than he was.

The Vermont senator’s key policy proposals of Medicare for All, free college tuition, higher taxes on the super-wealthy and a Green New Deal are popular among the public and Sanders has had success in pulling the American political conversation to the left. However, the closer he gets to the White House, the harder those in power will fight to keep him out of it, not least of all, CNN.