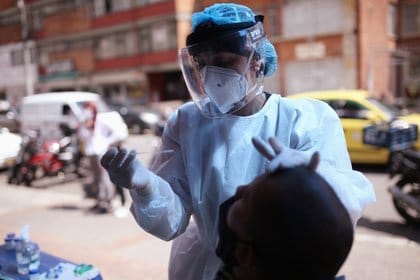 The highest number of deaths in a single day was reported in Bogotá, with 66, followed by the departments of Valle del Cauca (32), Antioquia (31), Norte de Santander (23), and Santander and Tolima (12).

This Saturday, January 2, the Colombian Ministry of Health reported 270 deaths from COVID-19 to reach a total of 43,765 deaths from the pandemic in Colombia, where 11,528 new infections were also reported, taking the number of people who have contracted the novel coronavirus in the country to 1,666,408.

Colombia is one of the countries most affected by the pandemic in South America according to official figures. Many experts agree that Colombia suffers from high underreporting of infections and deaths due to the collapse of the healthcare system.

According to the health authorities of the country, there are still 87,239 active cases, which is 5.23% of the total number of recorded cases, and 1,530,973 patients have recovered, corresponding to 91.87% of the people who contracted the disease.

DEATH OF MEDICAL PERSONNEL FROM COVID-19

According to data from the National Institute of Health (INS), as of December 31, there have been 22,640 cases of coronavirus among Colombian health personnel.

The information added that 125 people who worked in the health sector died from COVID-19, while 22,297 people overcame the disease.