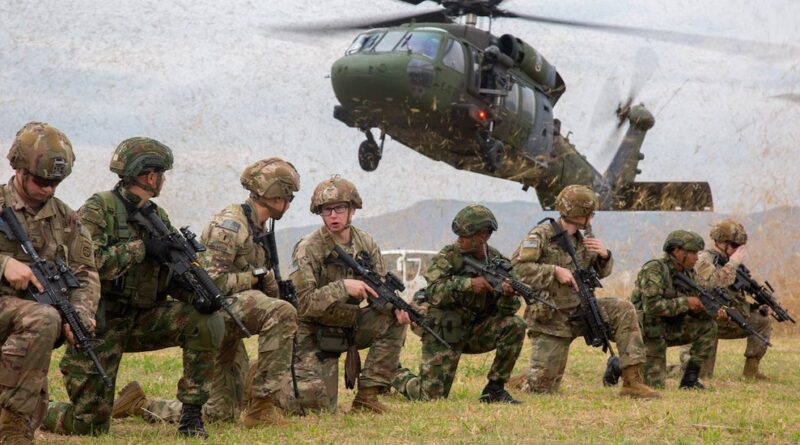 Secretary of State Michael Pompeo and Colombian President Ivan Duque, meeting in Bogota on September 20, talked about “managing the COVID-19 response … narcotraffickers … and [President] Maduro’s illegitimate regime,” according to the State Department. A Cuban observer insists they explored “when to begin military actions and sabotage in Venezuela.” Elliott Abrams, the White House official responsible for Venezuelan affairs, dismissed the idea of U.S. military engagement as an “absurdity.”

The specter looms of an “October Surprise”, that staple of U.S. presidential electioneering. It’s widely assumed that to win in Florida, candidates must show off their anti-revolutionary zeal to voters of Cuban or Venezuelan origin. Decisive action against Venezuela now might do the trick.

Colombia acts as the local U.S. enforcer as regards Venezuela. That role grew out of U.S. Plan Colombia which after 2000 had the United States building up Colombia’s military, harassing leftist insurgents, and establishing a base for regional military operations – all under the pretext of combating illegal drugs.

Before arriving in Bogota, Pompeo had visited Venezuela’s other neighbors – Surinam, Brazil and Guyana. In Boa Vista, located 141 miles from the Venezuelan border, he met with Brazil’s foreign minister and commiserated with Venezuelan refugees.

Pompeo backed Guyana’s resistance to a Venezuelan claim on the Essequibo region, where ExxonMobil is extracting oil. He authorized U.S. participation in military patrols along that disputed border. China, investing in Guyana and Surinam, has invited both to join its Belt and Road initiative.

On August 18 in Bogota, White House National Security advisor Robert O’Brien had already presented President Duque with a new version of U. S. Plan Colombia called “Colombia Grows.” By way of nurturing the alliance, it offers “rural development, infrastructure expansion, [and] new opportunities for investment.” The presence at the meeting of Admiral Craig Fuller, Chief of the U.S. Southern Command, and Mauricio Claver-Carone, head at the time of the National Security Council’s Western Hemisphere Division suggests Venezuela was on the agenda.

Venezuela is in the spotlight now for good reason. National Assembly elections take place there on December 6, and the right-wing opposition is fractured. Both the United States and Juan Guaidó, the former National Assembly president named as Venezuela’s president by the United States, want an election boycott. Other opposition groups and leaders, notably former presidential candidate Henrique Capriles, will be participating.

Signs of unity are cropping up – not good news in Washington. Says a government supporter: “on December 6, many of us will vote for the government, others will vote for the opposition; but all of us … will be voting against the criminal blockade that has caused us so much damage.”

For the U.S. government, any hint of election normalcy would be a reverse. Sympathetic world leaders, counting on a new government in Venezuela but detecting signs of durability, might adjust their thinking. Maybe the present show of hostility – the meetings, naval maneuvers, and new sanctions on diesel fuel – would keep them in line.

U.S. strategists may be fretting also because regime change hasn’t happened, despite all the financial and logistical support that’s been delivered to Venezuelan dissidents and plotters during the presidencies of both Presidents Maduro and Chavez.

The list of recent attacks is impressive: street protests in 2014 and 2017, a drone attack against Venezuela’s top leaders in August 2018, humanitarian aid pushed across the Colombia-Venezuela border in January 2019 to incite a military uprising, a cyber-attack causing a nationwide electrical blackout in March 2019, a military officers’ coup attempt in April 2019 backed by Guaidó, and in May renegade Venezuelan troops led by former U.S. Green Berets invading from Colombia.

Plotters often plan and prepare in Colombia and find refuge there afterwards.

U.S. economic sanctions and U. S. plundering of Venezuela’s economic assets abroad have led to devastating shortages of credit, food, medicines, and supplies for oil production, which has collapsed. Oil exports have accounted for more than 95 percent of the country’s export income. There’s no other money available to pay for imported food and medicines or for social services. Even so, Venezuela’s government survives.

In Colombia presently, societal disruption and a newly energized protest movement may be deflecting the government’s attention from regime change in Venezuela.

Unemployment is 20.2 percent; 19 million Colombians live in poverty, eight million in extreme poverty; 6.5 percent of the people are food-deprived; 2 million Colombians are illiterate; the health care system is a disaster. According to one report, 992 social leaders and 229 former FARC insurgents have been killed since late 2016, when the government’s peace agreement with the FARC was signed.

A U.S. “Security Force Assistance Brigade” arrived in early June to prepare a “full spectrum offensive against Venezuela.” But Colombia’s Senate rejected its presence, a court decision validated the Senate’s action, and then Defense Minister Carlos Holmes Trujillo welcomed the U.S. troops. A U. S. military presence in Colombia is not new, but now popular opposition to more U. S. troops is growing.

Police in Bogota killed law student Javier Ordoñez on September 9. He had joined many thousands who were protesting the killings of social leaders, a flawed response to the Covid 19 pandemic, and neo-liberalism. Later that day the police killed 11 young people. Broadening their demands, demonstrators called for Pompeo’s visit and the U. S. – Colombian military exercises to be canceled.

Former President Alvaro Uribe is under house arrest. This recipient of the U. S. Medal of Freedom and collaborator with drug traffickers and murderous paramilitaries is accused of complicity in three paramilitary massacres, including the El Aro massacre of 1997. Former paramilitary chieftain Salvatore Mancuso, responsible for that massacre and recently released from a U.S. prison, is resisting repatriation to Colombia where he might have to testify against Uribe. An obliging U.S. government may let him stay. Colombian critics of Uribe and his protegee Duque are outraged.

In both countries, ramifications of the pandemic, serious economic problems, and political divisions serve, if for nothing else, to lessen the urgency of other concerns. It’s a context in which, for many Colombians, plotting against Venezuela, especially in collaboration with the United States, may no longer be a priority. In Colombia, reports one observer, Duque has “all but lost legitimacy as president.”

If indeed direct military intervention is unlikely, the option of undercover war remains. In fact, paramilitary detachments have been operating in Venezuela for many years. The U.S. government itself recently showed what war in the shadows will look like.

Venezuelan authorities are prosecuting a CIA-connected former U.S. Marine who, well-armed and with explosives, was arrested on September 14 with Venezuelan accomplices near a large oil-refinery complex in Falcon State. Matthew John Heath is accused of preparing “acts of sabotage.”

Question: how committed are anti-Venezuelan hawks in the United States to direct military intervention? Maybe they doubt the capabilities of their Colombian ally. Maybe mess of the kind visited upon Iraq, Afghanistan, and Libya would be too close to home. Maybe in the end, harassing the Maduro government, destabilization, and bluster will be enough, at least for keeping their foreign and domestic friends in line.

Masses of working people in Venezuela are mobilized for better lives and for peace. They are anti-imperialist. They are why their government survives. It would survive easier with a kindred movement in Colombia. A U.S. version would be icing on the cake.