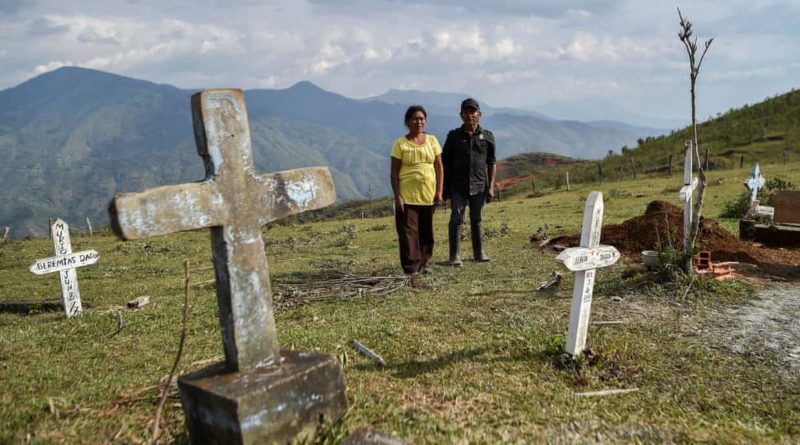 When cities across the country introduced local quarantine measures last week, three social leaders were killed, and as the country prepares to impose a national lockdown on Wednesday, activists have warned that more murders will follow.

Marco Rivadeneira, a high-profile activist, was murdered in the southern Putumayo province, Ángel Ovidio Quintero was shot dead in the western Antioquia region, and Ivo Humberto Bracamonte was killed on the eastern border with Venezuela.

Colombia is one of the most dangerous countries in the world for activists and community leaders, who often fall foul of armed groups fighting for territory.

Since a historic peace deal was implemented in early 2017 with the Revolutionary Armed Forces of Colombia (Farc), a leftist rebel group, 271 activists have been killed. Now, with the government focused on the pandemic, activists say they are even more at risk.

“I’ve been getting more death threats since everyone started talking about coronavirus,” said Carlos Paez, a land rights activist in a cattle-ranching region near the northern border with Panama. “One message said that they know who I am – and that now is the time to take me out.”

Some of the armed groups are dissident Farc fighters who refused to hand in their guns; others belong to smaller rebel armies and rightwing paramilitary militias.

Whatever their purported ideology, all make their money in drug trafficking, illegal mining and extortion rackets, and all view social social leaders as an obstacle to those lucrative economies.

And as the government focuses its resources on stemming the coronavirus outbreak – which has now claimed three lives in Colombia amid 277 confirmed cases – normal security protocols have been thrown into disarray.

“They are playing with our lives because they know that our bodyguards, the police and the justice system are going to be even less effective they usually are,” said Paez. “It’s horrible. I’m scared for my life.”

Colombia’s war with Farc and other armed groups has claimed at least 260,000 lives and forced 7 million people from their homes. Now, with much of the country confined indoors ahead of a 19-day nationwide quarantine that begins on Wednesday, non-state actors are operating more brazenly.

Activists fear that a nationwide quarantine – to be imposed on Wednesday – has put them in a deadly bind. Moving around puts them at risk of infection, but staying in one place makes them sitting targets.

“We are being killed, like always,” said Héctor Marino Carabali, a rights activist in Cauca, who usually travels in an armoured car with a security detail provided by the government. “The government has taken drastic measures to fight the virus, but done nothing to protect us now or to tell us about how we can do our work. Curfews and lockdowns always affect the most vulnerable.”

The Office of the United Nations High Commissioner for Human Rights last week reported that armed groups were continuing to commit brutal human rights abuses in Chocó, the province where Paez leads a community. Three people were beheaded, with one executed in front of their village, and a pregnant woman was murdered.A coalition of local NGOs and over 100 rural communities called for a ceasefire among armed groups during the outbreak. “The emergency situation deserves our focus as a country and as a society to take on this challenge,” the communique read.

Many leaders and watchdogs have accused president Iván Duque of not doing enough to quell the bloodshed. They are not optimistic that will change as the virus spreads.

“Unfortunately, all critical issues in Colombia are being surpassed by the coronavirus health crisis,” said Gimena Sánchez, Andes director at the Washington Office on Latin America, a thinktank. “Coronavirus gives the Duque government more elements to excuse themselves from properly protecting social leaders and investigating cases of killings.”

Featured image: Three people have died and there are 277 cases in Colombia as the local authories imposed restrictions. Photograph: Luis Robayo/AFP/Getty Images