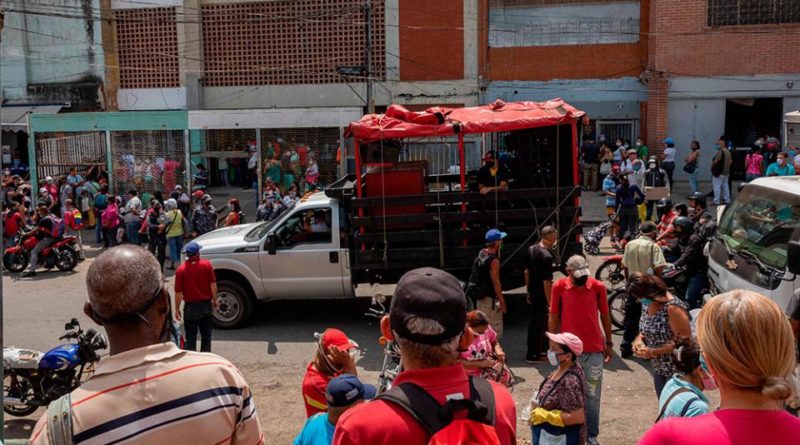 The measures for the popular sectors seek to strengthen the subsidized food and bonus distribution system.

“People of Venezuela, the situation is not easy,” repeat the trucks that moves through the streets of Caracas and ask people to stay at home. The country is in the fifth week of quarantine, a new dystopian normal with masks, police on the streets, closed shops, queues for gasoline, and a drought that adds more heat to the heat.

The numbers in the face of the pandemic show, for the moment, a situation under control: 197 people infected, 111 recovered and 9 deceased . The government carries out a daily update by radio and television to explain the evolution of the curve that remains flat, where new cases arise and in what circumstances.

The policies deployed have resulted in both early quarantine with the use of a mandatory face-masks, disinfection of common areas, the conduct of a digital survey for people to notify if they have symptoms, the visit of doctors in those homes, and the carrying out of free 225,009 tests.

RELATED CONTENT: Ecuador Confirms a Discrepancy of 5,700 Deaths in Guayas, the Province Hardest Hit by Covid-19

These measures have been complemented with international support received to strengthen the health system: medical supplies from the Red Cross, the Pan American Health Organization, China, Cuba and Russia.

The decision to tackle the emergence of the coronavirus on an emergency basis also allowed it to cope with the return of Venezuelan migrants who have been entering the land borders with Colombia since the start of the pandemic. More than ten thousand people have entered the country so far, which led to the deployment of a medical, sheltering and food operation at several crossing points .

The government announced that the quarantine will be extended for thirty more days, that is, until almost mid-May. Along with the measures already taken, the use of a family pass to move around began to be implemented from Monday in one of the popular areas of Caracas, the Sucre parish, in order to limit displacement and cut the transmission chains of the virus.

If the perspective regarding emergency health management is clear in its explanation and development, the situation in the economic area is, on the other hand, uncertain.

Different problems have accelerated in recent days: the increase in the price of parallel dollar, which went from 70 thousand to nearly 130 thousand bolivars, the increase in prices linked to the dollar and speculation, and the shortage of gasoline that previously affected the border areas and has now reached the capital.

The measures taken by the government towards the popular sectors have focused on trying to strengthen the subsidized food distribution system, granting bonuses – within a general policy of low monetary emission to try to contain inflation – and prohibiting the cut of services, many of them already very cheap.

Maintaining quarantine is difficult for many due to the closure of the informal economy, which, due to the deterioration of regulated wages, has expanded sharply in recent years. In addition to this, experts estimate a reduction in remittances, which are part of the circulating money in the already partially dollarized economy.

The shortage of gasoline, meanwhile, is the result of several factors. On of them, central, the North American blockade, which sanctions the state oil industry PDVSA, the international companies that work with it, which affects both the export of crude oil, as well as the import of chemicals, machinery / spare parts, and gasoline and additives to produce it.

The blockade is exacerbated by the drop in oil prices due to the reduction in global demand by about 25% , and the initial lack of agreement between Russia and Saudi Arabia to decrease production. The recent agreement between the main producing countries to cut 9.7 million barrels per day is good news for Venezuela, but it will not have, according to several analysts, a significant impact on prices until demand is reactivated, that is, quarantines ceasing, borders beginning to be reopen.

The oil problem is then fivefold: low production -although an increase would face the difficulty of selling it due to the decrease in demand-, exports, prices, income for the State, and internal supply, which, in turn, affects the mobility of various areas of the economy.

Given this situation, the reactivation of a refinery, El Palito, has begun in the central area of the country to supply part of the internal gasoline market, and, according to Maduro, relations with China, Russia and Iran have been strengthened.

“People of Venezuela, the situation is not easy”, is then a correct definition of the state of affairs due to the threat of the coronavirus, the quarantine, and the economic situation that is partly explained by the North American blockade against which many international voices speak for its lifting.

The United States, for its part, has made it clear that it will not lift the blockade, and seeks to make the pandemic an opportunity to press on in the attempt to overthrow Nicolás Maduro, which it needs most urgently due to the crisis situation in the US fracking industry, particularly hit by the oil crash.

It is not the only thing: Trump seeks in turn to divert eyes from the critical internal situation of the country that exposes errors of the White House, disputes with governors, tensions with the Pentagon, skyrocketing unemployment numbers and the inability to lead responses at the international level.

Featured image: A government truck in Caracas asks people to stay at their home.
Image: EFE