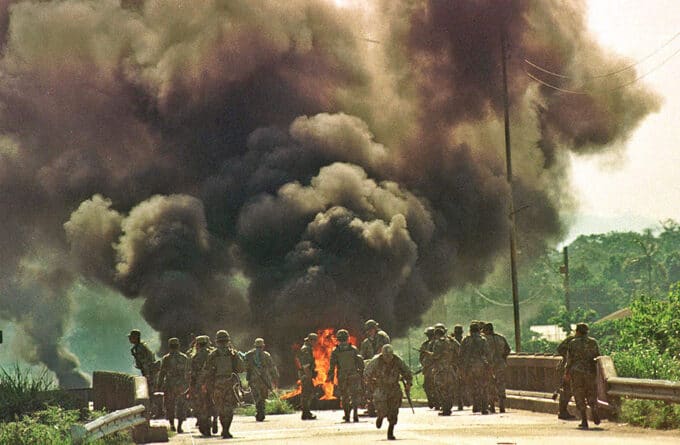 April 6, 2021, Miami – Yesterday, a federal judge rejected an attempt by Bolivia’s former president, Gonzalo Sánchez de Lozada, and former defense minister, José Carlos Sánchez Berzaín, to vacate a $10 million damages award against them for the massacre of unarmed Indigenous people in 2003. A jury found the former officials liable under the Torture Victim Protection Act (TVPA) in April 2018, after a month-long trial that included six days of jury deliberations. The trial marked the first time in U.S. history that a former head of state sat before his accusers in a U.S. human rights trial. In an unusual move, a month later the trial court set aside the jury verdict and entered its own judgment holding the defendants not liable based on insufficient evidence. In August, the U.S. Court of Appeals for the Eleventh Circuit vacated the district court’s judgment and remanded the case to the district court for further proceedings. The defendants filed a second motion to vacate the jury verdict and damages award. Today, the trial court rejected that request.

“This news brings me so much happiness,” said Hernan Apaza, whose sister Roxana was killed by Bolivian soldiers in 2003. “We held on to hope for so many years despite so many obstacles for justice. Finally, those who committed these egregious crimes will be held accountable.”

RELATED CONTENT: Despite US Dirty Tricks, Bolivia is Finding a Way to Stay Independent

In September and October 2003, acting under the authority of Sánchez de Lozada and Sánchez Berzaín, the Bolivian military killed 58 of its own citizens and injured more than 400, almost all of them from indigenous communities, during a period of civil unrest known as the “Gas War.” Among those killed were an eight-year-old girl, a pregnant woman (whose fetus also died), and elderly people. After the massacre, Sánchez de Lozada and Sánchez Berzaín fled to the United States, where they have lived since. Former military commanders and government officials who acted under the authority of the two men were convicted in Bolivia in 2011 for their roles in the killings. Sánchez de Lozada and Sánchez Berzaín were indicted in the same case but could not be tried in absentia under Bolivian law.

The appellate court held that plaintiffs provided sufficient evidence that “soldiers deliberately fired deadly shots with measured awareness that they would mortally wound civilians who posed no risk of danger. None of the decedents were armed, nor was there evidence that they posed a threat to the soldiers. Many were shot while they were inside a home or in a building. Others were shot while they were hiding or fleeing.” The appellate court vacated the lower court’s judgment and remanded the case to the district court to decide whether the jury verdict should be reinstated under the proper standard.

Yesterday, the district court ruled in favor of family members of those killed in the massacre, reinstating the $10 million jury verdict. The court held that the plaintiffs had presented sufficient evidence that the deaths constituted “extrajudicial killings” under international law and that the defendants were responsible for those killings under the doctrine of command responsibility. The appellate court had also ordered a new trial on plaintiffs’ related wrongful death claims, because the district court had abused its discretion in admitting certain evidence that was favorable to the defendants. The trial on those wrongful death claims is pending.

“Yesterday’s decision sends an important message that leaders who commit rights abuses will be held accountable,” said Thomas Becker, a lawyer with University Network for Human Rights. “This is a victory, not just for the families, but for all survivors of human rights violations.”

The case was brought by the family members of eight people killed during the massacre, among them Etelvina Ramos Mamani and Eloy Rojas Mamani, whose eight-year-old daughter Marlene was killed in front of her mother when a shot was fired through the window; Teófilo Baltazar Cerro, whose pregnant wife Teodosia was killed after a bullet was fired through the wall of a house; Felicidad Rosa Huanca Quispe, whose 69-year-old father Raul was shot and killed along a roadside; and Gonzalo Mamani Aguilar, whose father Arturo was shot and killed while tending his crops.

“We are thrilled that our plaintiffs, who have worked so hard for so many years, have won this important victory,” said Beth Stephens, a cooperating attorney with the Center for Constitutional Rights.

At the three-week trial in 2018, a former soldier in the Bolivian military testified that he was ordered to shoot at “anything that moves” in a civilian community. Another witnessed a military officer kill a soldier for refusing to follow orders to shoot at unarmed civilians. Witnesses also recounted that tanks rolled through the streets and soldiers shot for hours on end, including into homes and at fleeing, unarmed civilians. It was Bolivia’s deadliest month since the country became a democracy 40 years ago.

The case, Mamani v. Sánchez de Lozada and Sánchez Berzaín, was filed in 2007 under the TVPA, which allows damages to be recovered in U.S. federal courts for extrajudicial killings. The case alleged that Sánchez de Lozada and Sánchez Berzaín planned and ordered the killings. The family members are represented by a team of lawyers with the Center for Constitutional Rights, Harvard Law School’s International Human Rights Clinic, and the law firms of Akin Gump Strauss Hauer & Feld LLP and Schonbrun, Seplow, Harris & Hoffman, LLP.

“Over the past 14 years, Akin Gump’s pro bono practice has remained committed to ensuring that our clients obtain justice in this matter,” said Joseph L. Sorkin.”We are thrilled for our clients, whose commitment to their families and determined pursuit of justice is truly inspiring.”