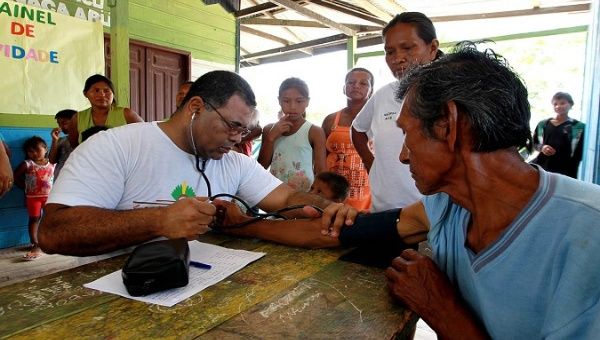 Brazil’s government will readmit 1,800 Cuban doctors to return to serve in the territory.

The Brazilian government will authorize 1,800 Cuban doctors who remained in the country after President Jair Bolsonaro ended the “Mais Medicos” (More Doctors) program to return to serve in the territory.

The lack of health personnel in the poor and remote areas of the Latin American giant, which Brazilian doctors avoid, has been the main reason for this decision, local media report.

Almost two years after Bolsonaro announced during his presidential campaign that “we are going to expel the Cubans from Brazil,” because their main purpose is “to form guerrilla groups,” he now recognizes that they are essential to guarantee basic care for the Brazilian people in the most humble areas.

Even though in November 2018, Bolsonaro questioned the capacity of the Cuban professionals who worked in the “Mais Medicos” (More Doctors) program, launched in 2013 by the Brazilian and Cuban governments at the time, local media report that the Bolsonaro administration will prepare a public announcement to readmit these professionals, with a two-year contract.

“Lula, without a passport, will be arrested if he tries to leave Brazil. We can say that he’s in exactly the same situation as the Cubans from the “More Doctors” program.”

The number hired will depend on the voluntary presentation of these professionals but they will not have to have the revalidation done – an exam that allows the validation in Brazil of the diplomas obtained abroad -, as it was agreed at the time of the closing of the program.

“@jairbolsonaro is a ruler who does not think about the welfare of his people, he says any foolishness with the aim of distorting the objectives of the ‘Mais Medicos’ program which only looked for the most dispossessed to have quality medical services #CubaCooperates”

Currently, according to data from the Ministry of Health, there are 757 vacancies for idle doctors due to the constant withdrawal of replacements in the most vulnerable municipalities.

A study by the Pan-American Health Organization on the impact of “Mais Medicos” (More Doctors) revealed that, with the definitive end of the work of Cuban professionals in the territory, Brazil could have 37,000 deaths of children under five by 2030.