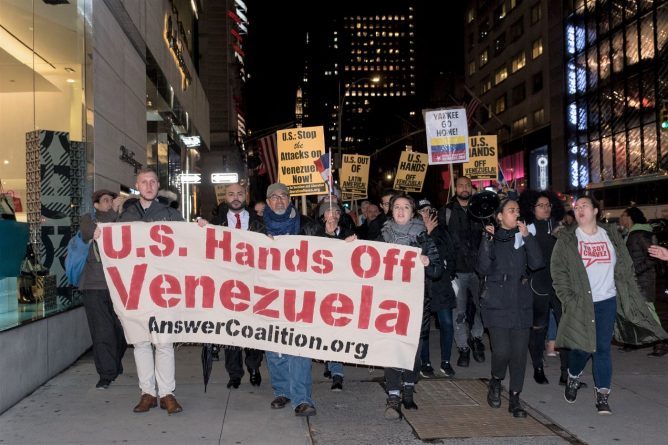 The following article is based upon a talk given in New York City on Jan. 24 at a demonstration initiated by the Party for Socialism and Liberation, supporting the Venezuelan government from a U.S. backed coup.

Over the past few days, a corrupt, illegitimate regime lacking the support of vast swaths of the population it claims to represent, backed another round of imperialist hostilities against the Bolivarian Republic of Venezuela. In an unconstitutional event spearheaded by the Venezuelan right wing, the president of the National Assembly in judiciary contempt, Juan Guaido, swore himself in as interim President of Venezuela, and received immediate recognition by the United States and its satellite governments in the region such as Colombia, Brazil and other Lima Group nations.

The U.S. also encouraged the Venezuelan military and security forces to “support democracy,” defend the transitional government and recognize the new leader, usurping the elections that took place in accordance with the country’s constitution in 2017 and 2018, in which Nicolas Maduro and the United Socialist Party of Venezuela, were the victors in their respective years.

With this latest round of hostility, we see the same song and dance of the imperialist media; your CNNs and MSNBCS, even some mainstream “left” media outlets, and this is unfortunately being permeated into the discourse among working class people here.

It starts with a cartoonish vilification of a government leader, a white-washing of the racist and reactionary opposition, the elevation of the narratives of wealthy expatriates who support U.S. imperialism, an erasure of indigenous voices who support the target government, and “whataboutism,” “both sides-ism” and respectability politicking from U.S. “progressives” and ostensible leftists. So I’m going to set the record straight.

This erasure of a movement makes it easier to sell imperialist machinations by wrapping it in “the people vs. the dictator” language. This is ironic given the fact the U.S. has a literal billionaire in office as president, who is letting 800,000 people work without the means to feed themselves and their families so he can negotiate building his racist border wall.

The next phase is the white-washing of the opposition. When Vice President Mike Pence, talks about restoring “democracy” to the Venezuelan people, the “Venezuelan people” he’s referring to are the minority of upper, wealthier layers of Venezuelan society who want to give a green light to U.S. corporations to exploit the labor and resources of the country, who want to roll back social programs and progressive gains of the Bolivarian revolution, and who want a share of the cream.

The reactionary opposition is not starving for “democracy.” They’ve have been invited to collaborate and dialogue by the Chavista movement for decades to resolve problems, but they’ve refused, saying that this huge movement that commands the respect of Venezuela’s workers and poor should have no voice, and should be silent and acquiesce to U.S. corporate domination.

The opposition affirm this whenever they purposefully burn foodstuffs and use financial mechanisms to manufacture artificial scarcity for commodities and necessities, in a cynical effort to diminish support for Maduro’s government and punish his support base.

The class character of the opposition is also affirmed, when in their guarimbas, right wing thugs belonging to the opposition commit hate crimes, including lynchings and other forms of torture against Afro-Venezuelans and other supporters of the Chavista movement.

Claiming ‘both sides are bad’

The difficult economic situation in Venezuela is not, as western media and popular discourse would have us believe, a result of mismanagement or of socialism. It is the direct result of an illegal and savage economic and political war that the U.S. has directed since Chavez came to power, in conjunction with bourgeois reactionary elements within Venezuelan society.

Claiming “both sides are bad” is convenient cop-out for those removed from the situation, But for the millions of people who are currently in the cross hairs of the most reactionary, brutal and sadistic empire the world has ever known, armchair analysis leads to ambivalence that only serves the oppressor class

Oppressed people worldwide, in the barrios, hoods, reservations, and camps within and outside of the colonial borders of the U.S., need solidarity and support now. They do not have the luxury of long range politics and ivory tower academic discourse in which lives are used as bargaining chips.

I want to talk about colonial chauvinism. When there is a nation subjected to an escalation of imperialist meddling, some people, and yes, ostensible “progressives” and “leftists,” withhold much needed denunciations and criticisms of imperialism, and instead raise criticisms of imperialism’s targets under the guise of “nuance.” This downplays, if not completely erases, the precarious economic and security environments that these countries have been placed in by the criticizer’s own imperialist government.

These critics of those in struggle have neither made a revolution in this country, nor had to deal with the inevitable twists and turns associated with socialist construction, poverty reduction, and international realpolitik in a world dominated by hegemonic U.S. finance capital. This is an example of colonial chauvinism.

If you think that the Venezuelan government is a dictatorship because it refuses to allow U.S. multinational corporations and bourgeois Venezuelans to mercilessly exploit poor people, but think that the U.S., which will foreclose on your home and evict you on behalf of a multi-billion dollar bank is not a dictatorship, you might be suffering from colonial chauvinism.

If you are sitting on top of an indigenous burial ground, or on top of hoarded wealth stolen from centuries of colonial plunder and rivers of blood, thinking that your government has the moral authority to decide what countries’ governments are “legitimate” or not, you might be suffering from colonial chauvinism.

Stop it. Get help. If you are not waging a continued struggle, ideological or otherwise, against your reactionary, parasitic government, whose defeat would be of service to workers and oppressed people around the globe, what kind of struggle are you waging?

Hasta la Victoria Siempre. Yankee Go Home! Death to US imperialism. All Power to the Chavistas in Venezuela!