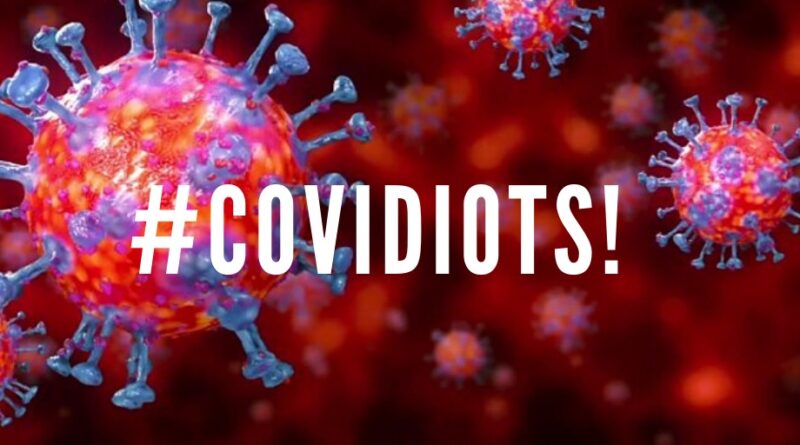 On the recent open thread commentator ADKC quoted from a post at the corona-nonsense blog Off-Guardian. The piece, published last week, is an updated rehash of one the same author posted in April.

The more recent version is unfortunately no better than the old one. It repeats false numbers, is scientifically astonishingly inaccurate, and draws false conclusions.

It makes little sense to review and refute the whole mess. I will therefore concentrated on the 6 of the 8 “Take Home Messages” at the end of the piece which ADKC posted here:

1. Corona viruses are one of the viral agents of the common cold, which, just like the flu, invade the whole planet every year. They cause largely widespread, mostly benign, yearly pandemics of respiratory tract infections.

There are seven distinct corona viruses that infect humans. Four of those can cause the common cold. The infections are generally mild. At times they have more severe consequences like pneumonia. The infection fatality rate for these four corona viruses is estimated to be about 0.1%.

The three other corona viruses, SARS, MERS and SARS-CoV-2 are very different beasts. They cause very severe symptoms in a significant numbers of the infected people. The infection fatality rate for SARS was 9% and for MERS it is even 37%. The true infection fatality rate for SARS-CoV-2 depends on various circumstances (health service availability, social and medical conditions of the population etc.) but is currently estimated to be around 1%.

To mix up the four corona viruses that cause the common cold with the three viruses that have 10 to 370 times higher death rates is highly misleading.

2. COVID-19, the infection caused by SARS-CoV-2, the current corona mutation, is not more lethal than the flu, with a 0.1-0.2% infection fatality rate.

This is a. outright nonsense that has no scientific basis and b. a lie.

SARS-CoV-2 is not a ‘mutation’ of some general coronavirus (there is none). Its nearest ‘relative’ is the RaTG13 virus known to be carried by certain bats:

Simplot analysis showed that 2019-nCoV was highly similar throughout the genome to RaTG13 (Fig. 1c), with an overall genome sequence identity of 96.2%.

Humans share some 96 percent of their genes with other primates. But no one would call a human to be a ‘mutation’ of an ape.

Evolution works through billions of iterative mutations until something unique evolves that fits to its environment.

he surviving results of the evolutionary process are unique in kind. SARS-CoV-2 is a very special beast that is unique in its kind and effects.

That is outright false and easy to refute. Just take a look at New York City which in April was hit hard during its first wave peak:

The infection fatality rate for New York City can be easily calculated. Some 26% of the 8.3 million inhabitants of New York City now carry antibodies against the virus. Those 2.1 million who are seropositive must have had a SARS-CoV-2 infection. The officially reported Covid-19 caused death toll for New York City is some 23,000. However the more accurate total excess death toll beyond normal levels was 27,000.

27,000 dead divided through 2.1 million infections gives an Infection Fatality Rate of 1.29%. That is ten times higher than the IFR number the Off-Guardian author claims.

New York City is special in that it is a high density city and has a diverse demographic with many higher risk groups living in relatively crowded quarters. But similar calculations can be made for other areas where sufficient data is available. The Lombardy in Italy reported a higher IFR than NYC as did some areas in Spain. Other locations, with more younger, more healthy people and better healthcare, will have lower infection fatality rates.

For the United States the general seroprevalence of SARS-CoV-2 antibodies in blood donations is only 2%. More dubious estimates claim 8 to 9% overall seroprevalence in the United States. Let’s be generous and assume that 10% of the 330 million strong U.S. population have already been infected. The current excess death count for the United States stands at 266,000. Those numbers (266,000/33,000,000) would give a (likely too optimistic) IFR of 0.8%. That is again far, far higher than the Off-Guardian author claims.

The next claim in the Off-Guardian nonsense:

3. An immense majority (95%) of fatal evolutions happen in old and frail individuals with premorbidities, with an average age of death at or above 80 years old.

That claim is again an outright lie:

The numbers in the second column of the table show that only about half of the total Covid-19 fatalities, not 95%, were “at or above 80 years old”.

As for “premorbidities” (being alive is btw one). Hypertension and obesity are named as co-morbidities for Covid-19 cases. The CDC says that 42% of all U.S. inhabitants are obese while some 45% have hypertension. But today these people are alive and reasonably well. Most of them have still several decades of life before them. Would they get infected with SARS-CoV-2 and die, the virus, not their co-morbidities, would have caused their death.

On to the next Off-Guardian blooper:

4. Antibody studies, cross immunization with other corona strains and the completion of the death toll curve in many countries are strong evidence that the human population is developing herd immunity against SARS-CoV-2. In this context, a severe “second wave” for SARS-CoV-2 is improbable. We may rather expect a new cold episode from it just like every year, but of regular or even weak intensity thanks to the gained herd immunity.

RELATED CONTENT: COVID-19: On The Decline in Nicaragua as its Critics Fall Silent

Antibody prevalence even in hard hit place like New York City is way below the 80% or so that would be needed for some kind of “herd immunity”. In the U.S. and Europe antibody prevalence is in total way less than 10%. The bay area for example has only some 2%. Is the U.S. ready to give 10 times more lives than the 266,000 who have already died of Covid-19 to achieve a potentially only temporary herd immunity?

Cross immunization with other corona viruses is a conjecture. We have so far no data that shows that there is cross immunity from other viruses that works against SARS-CoV-2.

(Recent data points in the other direction. Children have an innate immune response to SARS-CoV-2 and it protects them well. Every adult has been infected with dozens of different viruses while growing up. We adults have developed and show an adaptive immune response to SARS-CoV-2. This seems to work less well than the children’s response. Instead of developing cross immunity through other infections our bodies seem to have learned something from previous infections that makes it more difficult to counter SARS-CoV-2.)

The “improbable” second wave of Covid 19 is already developing in several European countries. Just take a look at France. And don’t worry. The rise in the still low death toll WILL follow the infection curve with a four weeks lag.

5. PCR testing of SARS-CoV-2 presence does not give any reliable prognostic evidence of its infectious power and lethality. The monitoring of the pandemic state and evolution is given only by the daily evolution of fatalities. In Switzerland as in many other countries, there is no longer any excess mortality attributable to the COVID-19 pandemic. Positive test rate is low (around 3%), and tests have as always a technical false positive rate and react to inactive viral fragments or to other corona strains.

The author says that to evaluate the state of the pandemic we should follow the number (death) that is known to lag at least four weeks behind infections instead of following the number of new infections per day. That is lunatic. Its driving at high speed while only looking into the rear view mirror. During a highly dynamic pandemic we need current infection data and predictions, not reviews.

Also: SARS-CoV-2 PCR tests DO NOT react to other coronaviruses. The RNA strings they are reacting to are unique to SARS-CoV-2. The tests can not even ‘see’ any other ones.

6. Only in a small percentage of COVID-19 patients, the SARS-CoV-2 virus may, like the flu virus, activate an immunological and inflammatory overresponse, causing at worst fatal pulmonary organ failure.

Stress and emotions like fear, anger and sadness may 1) stimulate this overresponse, 2) cause cell death in the emotional brain and 3) trigger therein deleterious overactivities, with resulting cell damages in body tissues.

General isolation, distancing and lockdown measures, by limiting social contacts, freedom and basic human rights, add to the death toll through an upsurge of psychosocial and economic destabilization, worsening of psychiatric and demented individuals and reduction of medical care to the whole population. We have thus a combined causality for an excess mortality of COVID-19, a significant part of it being not due to the SARS-CoV-2 virus itself but to the worldwide COVID-19 panic wave and the imposed introduction of drastic and inhumane measures.

That is the “Lockdowns kill” thesis that many covidiots use to claim that negative side effects of pandemic control measures outweigh their positive effects.

The thesis is wrong. Spain had a total lockdown everywhere between March 14 and May 9. It also had a lot of excess death. A large countrywide seroprevalence study showed where the most people were infected. That data is available on a granular and localized level.

BakuninsTraum @BakuninsT – 23:42 UTC · Sep 25, 2020
In the following, I have investigated how the seroprevalence of IgG antibodies in the different parts of Spain correlates with the associated excess mortality rate. /8

I used the results of this epidemiological study as a basis for my analysis:
link
I also used data from the following report on excess mortality:
link

The excess mortality is very different in various parts of the country: (pic) /10

@BakuninsT finds that while all of Spain was under lock down only those locations who had high infection rates, and therefore now show high antibody seroprevalence, had excess death.

Those locations who were in lockdown but had few or no infections did not have any excess death.

Conclusion:
The thesis that excess mortality is a consequence of a lockdown has been refuted. The regression line intersects the X-axis, i.e. there is no excess mortality where there are no infections. /16

I hope that ADKC and others who continue to post unscientific screeds from the Off-Guardian and elsewhere have learned a bit from the above. There are quite a number of authors with titles who have preconceived opinions and defend them even when that requires to mangle the facts or to simply lie about the science. A professor emeritus of neurosurgery is unlikely to be the best available source for current virology and epidemiology facts. Don’t fall for such ‘experts’.

In the run-up to the war on Iraq “the intelligence and facts were being fixed around the policy.” That is exactly what the piece we discussed above has done. It should not have been published. With respect to Covid-19 the Off-Guardian editors seems to replicate the Bush administration’s lack of veracity.