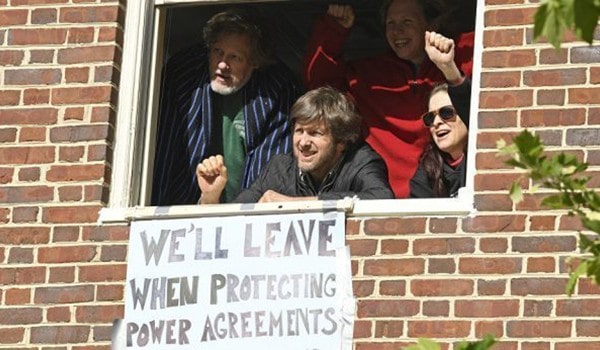 A pretrial hearing of the four Embassy Protectors facing federal prosecution took place before Judge Beryl A. Howell on January 29 in Washington, DC. The hearing, which was to define the parameters of the upcoming trial, became complicated as the judge learned more about the facts of the case.

When the hearing started, Judge Howell stated that she expected to rule on all the issues requiring decisions that day. She added that her previous ruling on discovery, where she denied all of the defendants’ discovery requests, ought to tell the defendants what to expect. However, after four hours, the judge decided to delay some of her decisions on critical elements such as what the jury will be allowed to hear and whether the Embassy Protectors will be able to present a meaningful defense.

During the course of the morning, it was also evident that the prosecutors were trying to manipulate the upcoming trial in a way that would guarantee a conviction. The first area of contention was whether the word “trespassing” or its equivalent should be included in the trial statement that would be read to the jurors. The Embassy Protectors were not charged with trespassing, yet the prosecution wanted to describe them as trespassing without allowing the four defendants to explain they were in the Venezuelan Embassy with the full permission of the Venezuelan government. This was left unresolved at the end of the day.

The next hurdle for the defendants was whether photos and videos of people who are not on trial or of signs with political messages ought to be included in the exhibits. The defendants’ lawyers argued that people who are not being tried are not relevant to the case and that political messages should not be included, especially if the defendants will not be allowed to explain what they mean to the jury. This was also left unresolved at the end of the day.

The most important part of the hearing was the motion by the Trump prosecutors to prevent the four Embassy Protectors or their lawyers from being allowed to tell the jury anything that would explain the context of the case. The prosecutors sought to limit what the jury would hear to three things: The Embassy Protectors were in the Venezuelan Embassy, they were ordered to leave, and they didn’t.

The judge was initially inclined to agree with the prosecutors, questioning the defense about why it mattered that the jury know about things such as who is the president of Venezuela, international law that governs the treatment of embassies and what happened during the time the four protectors were in the embassy.

As the hearing proceeded, it seemed the judge was hearing information that was new to her. She was not familiar with the Vienna Convention or with Protecting Power Agreements, which have been used in diplomatic relations for hundreds of years and are incorporated in the Vienna Convention. The US already has 20 such agreements with other nations. She did not seem to know that the four protectors were given permission to be in the Venezuelan Embassy by the elected government and were given the keys to the Embassy.

When one of the defense lawyers described the pro-coup mob as ‘hoodlums,’ she was perplexed. When he explained that the pro-coup mob outside the Embassy broke doors and windows, broke into the Embassy and damaged it, and cut off access to food, she seemed unaware of their violent actions and attacks on the embassy. The prosecutors failed to inform the court about the fact that the US Secret Service did nothing to stop the mob from physically attacking the embassy as it was their responsibility to protect the embassy. Nor did they mention that the power and water had been illegally shut off.

The judge said granting the prosecutor’s motion would be the equivalent of a directed verdict, i.e. the judge directing a guilty verdict. She asked what defense the protectors would have if she granted their motion. The prosecutors struggled to answer and then posited that the four protectors could say they didn’t understand the order. The judge quickly retorted that this was unlikely given the education levels of the defendants, a medical doctor, a nurse with a Master’s degree, a lawyer and a college professor with a Ph.D.

Will the court respect international law or will the four protectors become political prisoners of US Empire?

The prosecutors, who had entered the courtroom in the morning fully confident that their requests would be granted, squirmed uncomfortably and worked ineffectively to justify their requests as the day progressed. In the end, the judge decided to delay her decisions on these key issues saying she would take the motions under advisement. The hearing was adjourned at approximately 1:30 pm.

Now, the defendants will have to wait for the judge’s rulings on whether the process will be rigged against them or they will be allowed to present a defense. It likely helped that over two dozen supporters attended the hearing.

The trial begins on February 11. We encourage supporters to attend the trial as the defendants face the full force of the Trump administration. The outcome of this trial impacts all who take bold actions to resist imperialism and respect the self-determination and sovereignty of people around the world.

If you choose to attend the trial, please heed the guidelines described here so your actions do not jeopardize the outcome for the defendants. Of particular importance is that supporters do not attempt to influence the jurors in any way such as approaching them, communicating with them or giving them information.