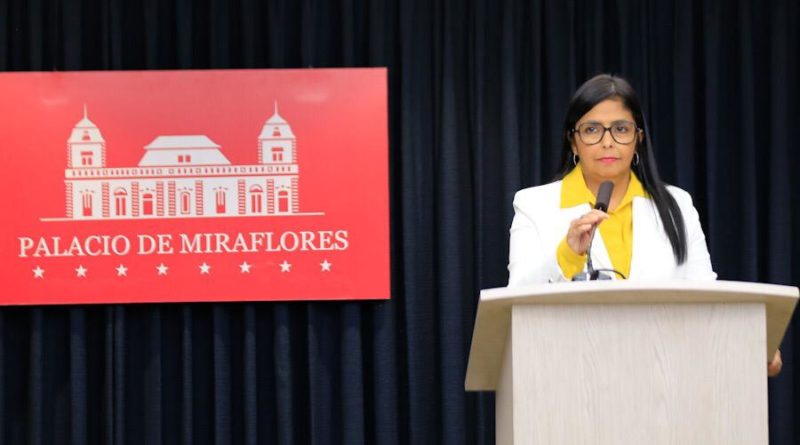 Executive Vice President of Venezuela, Delcy Rodríguez, confirmed that the South American nation and Russia will expand strategic bilateral cooperation, even in the face of coercive, unilateral and illegal measures the United States (US) government insisted on imposing with the aim, in this case, to affect these relationships and the State sources of income to the detriment of the people.

Her words were in response to the most recent unilateral sanctions imposed by the US Department of the Treasury against the company Rosneft Trading, a subsidiary of the Russian energy consortium Rosneft, for its commercial ties with Venezuela.

“The delusional supremacism of the US government has made international clumsiness its source of existence! Russia and Venezuela will expand their bilateral cooperation despite infamous US unilateralism. We will continue to stand up and in a good geopolitical way!” Rodríguez emphasized on Twitter.

In another post, the vice president repudiated the celebration expressed to this maneuver by actors on the Venezuelan extreme right that maintain the systematic conspiracy against the Venezuelan State and request more sanctions against the nation to the detriment of the national economy and the people.

“The enemies of the Homeland who today boast of attacking the noble people of Venezuela by preventing sources of income for their basic needs, are also responsible for crimes against humanity! Their stupidity is infinite! Venezuela will win!” Rodríguez said in another message published on the social network.

Faced with the coercive and illegal measure imposed against the subsidiary of the Russian energy consortium Rosneft, the Foreign Minister, Jorge Arreaza, denounced that such action is a measure of pressure to depose the constitutional president, Nicolás Maduro, and also constitutes a crime against humanity against the Venezuelan people.