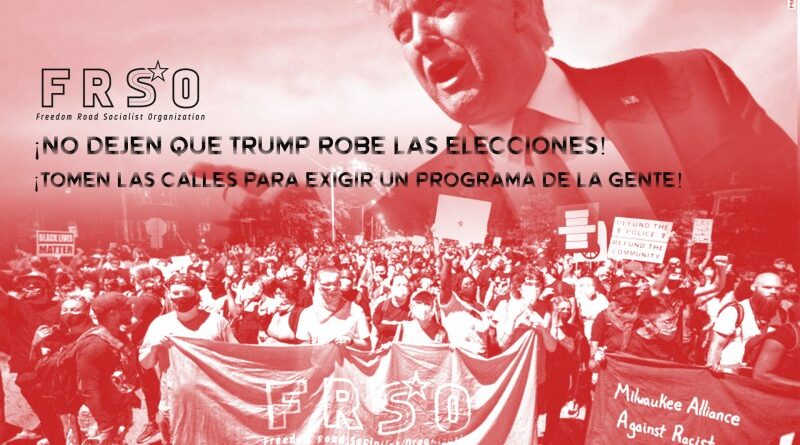 International News US/Canada
November 5, 2020November 5, 2020 Editor2 discrimination, electoral college, oppression, Racism, Republicans, Trump, US
By Freedom Road Socialist Organization – Nov 4, 2020
The world is watching as Americans vote to defeat Trump and the Republican agenda of racism, discrimination and oppression. Of course, the system already cheated the American people back in 2016. Trump lost the popular vote but was declared U.S. president by the elitist Electoral College system. Now Donald Trump threatens to be at it again, trying to lie, cheat and steal his way back into the White House.

Trump learned a lot back in 2000 when the Supreme Court used ‘hanging chads’ to declare Bush the president. Like Bush, Trump will stop at nothing, purging Black voters from election rolls, forcing voters to stand in line for hours at the polls, slowing the U.S. mail and refusing to count mail-in ballots.

Together the people must unleash a storm of struggle! If voting is not doing it, then it is time to take it to the streets – we need rallies and marches of working-class and oppressed people, with our allies, advancing democratic demands and challenging this system.

Four years ago, protesting Trump’s inauguration in Washington D.C., the Freedom Road Socialist Organization (FRSO) Political Secretary Steff Yorek declared, “Our goal is to make the country ungovernable for Trump and the Republicans.” The next day the Women’s March was the largest mass protest in U.S. history. Trump immediately launched attack after attack, and people resisted these with growing numbers of protests.

RELATED CONTENT: The Struggle for the Vote in the United States

We have done everything in our power to fan the flames of this resistance, from airport protests slamming Trump’s Muslim ban, to rallies at ICE offices denouncing immigrant children locked in cages, to promoting and leading the growing number of strikes by workers, to opposing Trump attacks on LGBTQ+ people. After the righteous anger of widespread militant protests against the gruesome Minneapolis police murder of George Floyd, it is safe to say there are more people standing up and fighting back in our country than any time since the early 1970s. Say it with us, “Stand up! Fight back!”

So what is next? We are organizing people to keep it in the streets. If Trump refuses to leave, we will need to do things like demand that local, county and state governments refuse to recognize him and act against him. Literally make the country ungovernable.

We have worked to meet Trump’s attacks with unity and people power solidarity! When the people force Trump to concede, it will be a very happy day! Then we advance to the next phase of struggle.

Regardless of how Trump leaves office, our next target is a president who also dances to the tune of Wall Street bankers.

With the economic and health crisis ongoing, we cannot return to the old ways of doing things. With Biden in office, little is going to change unless we demand it and back it up with people power, including the organized forces of the working class. Biden is not going to save us. We must initiate the changes we want through our own movements and with leadership consciously acting independently of both parties of Wall Street.

Biden’s record is clear; he pushed poor people off welfare, he locked up Black men and others at record numbers, and he enthusiastically went to war against countries and peoples that Wall Street considered too independent or too strong. To make change, we need to advance a people’s agenda like the one at the March on the Democratic National Convention in Milwaukee, August, 2020.

Of the many reforms people want, like immigrant rights and reversing climate change, three stand out. We immediately need health care for all to fight the COVID-19 pandemic. We need extended and expanded unemployment (Bring back the $600 now!) to pay rent and bills. Most importantly, we need to end police killings and police terror with community control of the police.

The fact is that we need to be rid of Trump. His brand of brutality and reaction is not only a concrete threat to real people’s lives; the constant loss of ground is an impediment to making progress on many issues, with the potential to demoralize the rising tide of struggle. That said, we are not confused about the nature of Biden or that fact that reforms do not go far enough. Working and oppressed people cannot get our dreams and aspirations met within the existing system – we need something different and better.

If you read Fight Back! for news, then you know we are building movements, trying to win immediate demands, all the while asking organizers and activists to build the fight for revolution by signing up with the Freedom Road Socialist Organization. Turn your righteous anger into meaningful activism for revolution, socialism and liberation. Join the FRSO.