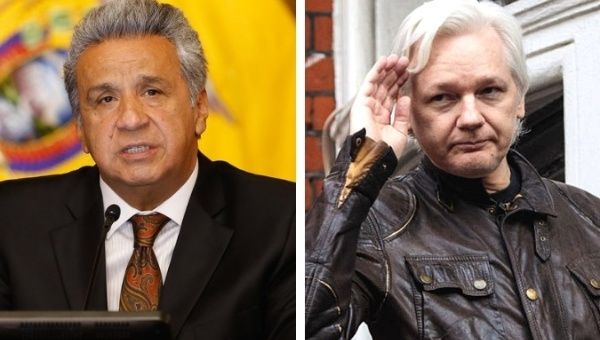 Ecuador says Assange doesn’t have the right to “hack private accounts or phones” nor intervene in the foreign politics.

Ecuadorean President Lenin Moreno argued Tuesday that WikiLeaks founder, Julian Assange, has “repeatedly violated” the terms of his asylum in the country’s London embassy and that he will “make a decision in the short term.”

Ecuador’s head of state, interviewed by the local Radio Broadcasters’ Association, said Assange does not have the right to “hack private accounts or phones” and cannot intervene in the politics of other countries, especially those that have friendly relations with Ecuador.

An allegation that comes as private photographs of Moreno and his family from when they were living in Europe circulated on social media, showing a lavish lifestyle related to the Ina Papers corruption case. The Ecuadorean government, its president, vice president, foreign minister, and state media quickly accused Assange of been the culprit behind the leaked information.

However, Wikileaks’ website or social media accounts never published press releases or images of President Lenin Moreno’s private life. The page issued a single tweet on March 25, 2019, which reported that a “corruption investigation opened against Ecuador’s President Moreno after purported leaked contents of his iPhone (Whatsapp, Telegram) and Gmail were published. New York Times reported that Moreno tried to sell Assange to the U.S. for debt relief.”

Ecuador’s former consul in the United Kingdom (2010 – 2018), Fidel Narvaez, denounced this fact in a public letter to the editorial director of state media El Telegrafo, Fernando Larenas, whose newspaper published a story on March 28, accusing Assange.

“Can El Telegrafo prove such a lie? Wikileaks has a single portal, with more than 10 million documents published in dozens of countries. Where are the communications adduced by the newspaper,” the former diplomatic head said, adding that “it is absurd to link Assange with publications of pages totally unrelated to Wikileaks, or with contents of the New York Times. As it would be ridiculous for the attorney general to investigate a “leak” that does not exist but only as fake news published by that newspaper.”

Julian Assange to be arrested? Ecuadorian state media, FM & VP suggest that Assange should be arrested for exposing alleged offshore corruption in the president’s family [@INAPapers] and an attempt to sell Assange to the US government. Only one problem: https://t.co/8wKDShKEFR

Yet this is not the first time, El Telegrafo – under Moreno’s government – has claimed false information pertaining to Assange. In an editorial article from October 28, 2018, titled “Assange’s Cat is another guest in Ecuador’s embassy,” the paper maintained that the political asylee receives “too many visits,” and that Ecuador’s government paid for his cat’s food.

For former Consul Narvaez, the latest “lie” is an attempt to distract the attention of the INA papers scandal “by victimizing President Moreno and finding a ‘scapegoat’”, arguing that “in short, the government seeks a false pretext to end the asylum and protection of Julian Assange.”

The Wikileaks founder accepted political asylum in 2012 to avoid extradition to Sweden to face allegations of sex crimes, which have been dropped. However, in the last two years, ever since Moreno took office, a new set of draconian measures have reduced his fundamental rights, in regards to freedom of speech, visits and movement inside the diplomatic mission.

Assange, who was granted Ecuadoran citizenship in December 2017, legally cannot be extradited as Article 25 of Ecuador’s 2008 constitution forbids extradition of nationals. Yet he has denounced attempts, influenced by U.S. pressure, to strip him of this right.

A United Nations Special Rapporteur on Privacy is due to visit Assange on Wednesday to investigate Ecuador’s spying on the activist. Ecuador filed a complaint with the rapporteur Monday denouncing WikiLeaks and others for reporting on the INA Papers offshore scandal engulfing its president.