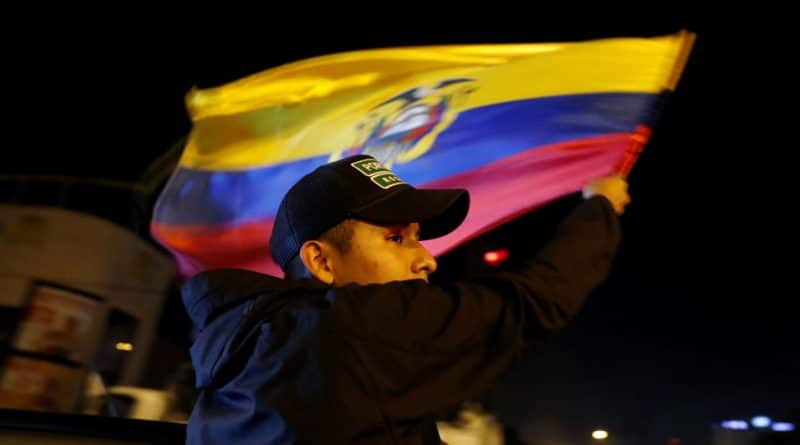 Editorial Note: Not having the OAS mediating in this complex situation in Ecuador is a new evidence of the decline of this regional body after the sad tenure of Luis Almagro. During Chavez’s time UNASUR was the regional body capable of dealing with situations like this but the US government and its Lima Group satellite countries have been working hard to destroy it.

The night in Ecuador was a celebration before the repeal of decree 883 announced after the dialogue between the indigenous movement and the government. What does this agreement really reach after eleven days of mobilization?

The celebration took over the night in Ecuador when it was announced that decree 883 had been repealed after eleven days of popular mobilizations. The announcement was given after a tense day of dialogue between the government and the indigenous movement represented centrally by the Coordinator of Indigenous Nationalities of Ecuador (CONAIE).

“As a result of the dialogue, a new decree is established that leaves Decree 883 without effect,” announced the United Nations coordinator in Ecuador, Arnaud Peral.

“This is a test of when everything can be united,” said one of the protesters upon hearing the news, while at the meeting point of the crowd, there was a celebration of what was considered a triumph over the Moreno government.

“Thank you brother for supporting the indigenous, helping everywhere, thank you, it has not been in vain, we have won the fight, we will forever be united, the indigenous people will always be at the forefront,” said an excited young man.

The dialogue between the parties had been announced the previous day after Moreno decreed an indeterminate curfew after 3:00 in the afternoon. That day had been marked by a great mobilization, where many sectors of the capital had approached the central point of protest, transforming the center into barricaded streets facing government repression.

Thus the dialogue was expected as a defining point: in case Moreno did not repeal decree 883, then CONAIE would remain mobilized, which would mean an extension of a crisis scenario not only in Quito but throughout the country. Indeed, the protests were held in different neighborhoods of the capital, along with roadblocks in the country, night and day. Cacerolazos, in a scenario of territorial extension of discontent that evidenced it was not just an indigenous issue or of a localized focus of conflict.

The government’s refusal to backtrack with the decree that removed state gasoline subsidies seemed irreversible. However, after a dialogue with the mediation of the United Nations ,Ecuador, and the Ecuadorian Episcopal Conference, which had a time of recess, the awaited announcement was made throughout the country.

The celebrations did not wait, and Quito, that had been the scene of great repression, smoke from burned rubbers, tear gas bombs and nights of resistance, was transformed into a boil of bugles, applause, songs of “the united people will never be defeated”, trucks loaded with people, taxi drivers, people who came from different parts of the city.

With the agreement reached, the conflict between the government and the popular mobilization, with its epicenter in the indigenous movement, entered another phase. What will the repeal of the decree be like? Will it be replaced by another to be discussed later? The latter, said Moreno after the meeting, while the indigenous leaders reaffirmed that they would only accept a repeal. The night in Quito ended with a celebration. There are still points to be debated about what will happen with the decree, as well as other aspects of the agreement signed with the International Monetary Fund, the abuses committed by the government during the great repressions that left a total, according to the latest report of the Ombudsman’s Office, of seven dead.