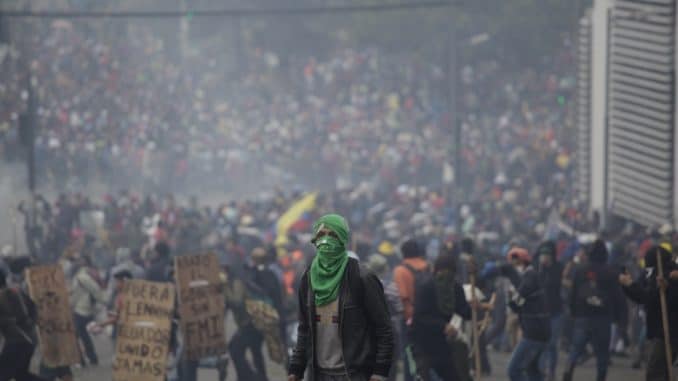 Economic measures, in keeping with the instructions of the International Monetary Fund (IMF), and approved by the president of Ecuador Lenín Moreno, aroused rejection from Ecuadorians.

Protests, marches, looting and even the occupying of the National Assembly by Indigenous activists this Tuesday are some of the events recorded in that country.

The demonstrations have taken place since last Thursday, October 3, against the measures, which include the elimination of subsidies for gasoline type extra and eco-pais, as well as diesel, causing the price to increase. In addition, they express their dissatisfaction against a package of labor and tax reforms that the Executive announced it will send to Parliament.

Supuesto Negado spoke Tuesday with Venezuelan migrants in Ecuador to know what they thought of what is happening in that nation and what can happen in the future.

Edgard Romero, a Venezuelan resident in that country for more than four years, says it is impossible to predict what might happen. “The compas here say that when the indigenous movement moves, the fall of the government is almost certain.”

He added: “The other way out is “death crossed”, which is being asked by indigenous moments and people in general. That means the Parliament dismisses the president, because of the chaos and the CNE calls elections. In that case it would call presidential and legislative elections, that’s why it’s death crossed … It’s in the Constitution,” Romero said.

He commented that since the Conaie, one of the biggest indigenous movements of Ecuador, has said that if Lenín Moreno cancels the measures, they will back down the protest.

“The detail is that Moreno has said he will not back down and took refuge in Guayaquil, the birthplace of the Ecuadorian oligarchs, and the politicians there have already said that they will face whoever dares to enter the city,” Romero said in an exclusive interview with Supuesto Negado.

He also reiterated: “Today (Tuesday) the Indigenous Movements took Parliament for a few minutes, so I think the complaint will go there, which is the most viable (“death crossed”). Oh, and something very important. The indigenous movement does not want anything with right or left (…) They have already said that they want nothing (to do with) Moreno, Correa, Lasso or Nebot (…) Therefore, the best way out will be that of death crossed,” he said.

“Hike in prices everywhere”
Jesús Castillo, also a Venezuelan migrant in Ecuador for three months, said in an interview via WhatsApp that the issue of increasing gasoline prices worries everyone. “Here it is said that by increasing gasoline, everything increases. They also want to increase the fare for public transportation (…) In addition, people do not want Lenin Moreno. In almost every corner of downtown Quito you see tires burning. Practically what (was) happening in Venezuela is happening here.”

Castillo believes that the protests could lead to an exit from the government “is what I have heard.”

Lisset Jaime García left Venezuela more than a year ago because of the economic crisis and said Wednesday that “now the same thing is happening in Ecuador, misfortune is after us.”

Jaime García believes that inflation will skyrocket as in Venezuela. “All prices went up in a week,” he added.

He stressed that the indigenous people are protesting precisely for food prices, “everything went up awfully since Moreno approved those measures.”

This Wednesday protests will continue in Quito, according to the media announcements in that country. Authorities said more than 500 people arrested, newspaper El Comercio reported. Moreno, meanwhile, insists that he is not going to back track, “the measures are maintained,” he said Monday on a national TV network.