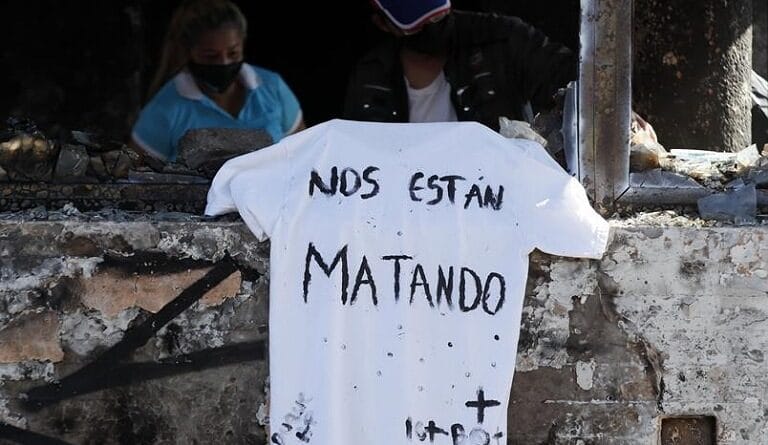 Sep 10, 2020.- The death toll during the violent day of protests against police abuse last night in Bogotá and other cities in Colombia rose to eight according to the official count, with the Bogotá mayor’s office confirming a sixth victim in the country’s capital on Thursday. The death toll is expected to raise.

“Unfortunately at this time, in addition to the five cases that we have already reported in the morning, we have one more deceased. There would be six in total in the city of Bogotá,” said the mayor of the capital, Claudia López in a public statement.

Authorities confirmed the death of Julián Mauricio González, a 27-year-old young man who died at Kennedy Hospital, in the south of the city, after being shot in the abdomen with a firearm, EFE reported.

The mayor explained that the six people who died in the city were young people between 17 and 27 years of age who died from gunshot wounds.

In addition to the six victims in Bogotá, there were two others in Soacha, a populous town located south of the Colombian capital, as reported earlier by the Deputy Director of the Police, General Gustavo Moreno, in a press conference with the Minister of Defense, Carlos Holmes Trujillo.

The protests began in front of the Immediate Action Command (CAI) of the Police of the Villa Luz neighborhood, in the west of Bogotá, where the two uniformed men worked who at dawn yesterday subjected with brutality and the prolonged use of an electric Taser Javier Ordóñez, a 46-year-old lawyer and father of two young children, who died shortly after in a clinic.

A war has been declared against Colombia's youth.

However, youth groups started attacking police facilities and public service buses in different parts of the city, causing the protest to spiral out of control.

More than 50 injured
López reported that in addition to the six dead there are 58 wounded by gunshots and pointed out that the authorities have evidence that there was indiscriminate use of firearms by the police. The France24 news channel mentions “hundreds of injured.”

This is the equivalent of combat. One does not have 58 injured in one night from brawls, but from the indiscriminate use of firearms by members of the National Police. At this point it is clear that the only one that can guarantee a serious and objective investigation of the facts is the Attorney General’s Office,” she said.

The killing fields of Colombia do not seem to offend the "democratic" and "humanitarian" sensibilities of the State Department enough to set up a shadow government and self declared president for Bogota. They get military bases, equipment and training instead. https://t.co/Yo3w56T5el

Among the 58 injured there are three young women, including a minor, in serious condition, who remain in intensive care units and were victims of shots in the chest, abdomen and neck.

“Our medical team is doing everything scientifically and humanly possible to save their lives, as always,” López stressed.

A team from the Mayor’s Office reconstructs what happened with the witnesses of the events and the families of the victims.

Claims against the police
López made a tough claim against the National Police, an institution that she said had disobeyed the instructions given by the Mayor’s Office since November last year when Dilan Cruz, a young high school graduate, died after being shot by a member of the Mobile Anti-Riot Squad ( Esmad) during a protest in the capital.

Bogota police beating man, woman in the street! They are trained by our fbi in miami! https://t.co/w39CYFZ9ng

Despite this, López said that “lethal weapons were used indiscriminately against defenseless citizens and young people”, and that “therefore these acts should be investigated, punished and condemned by the independent Justice [department].”

“We have evidence through social networks and through the cameras of the Mayor’s Office that there were indiscriminate shots by members of the police. There is clear evidence of this in at least four locations, “said López.

Colombian ombudsman requests review of police procedures
In statements published this Thursday through the social network Twitter, the Office of the Ombudsman of Colombia specified that police procedures must be reviewed in order to reform the action models of the public force.

Likewise, the government institution demanded an end to police violence in the country and, fundamentally, in the capital, Bogotá, when ruling on the most recent days of protests that are taking place in that South American nation.

The ombudsman’s office also urged citizens to exercise their right to protest peacefully, while showing solidarity with the families of the fatalities.