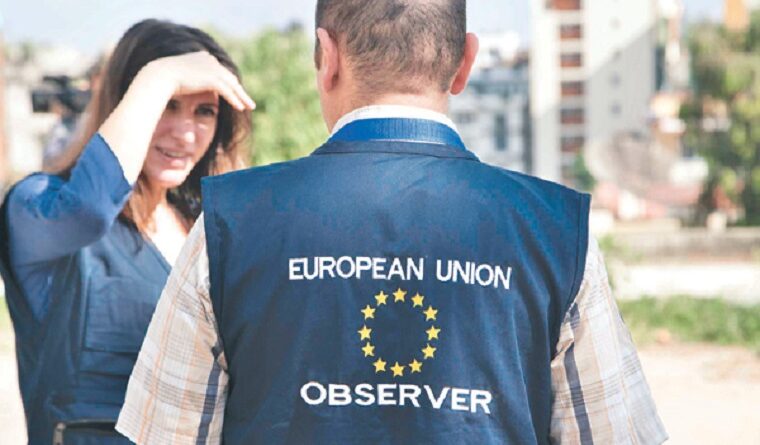 International election observer missions are supposed to watch that the individual legal voting rules of a country are followed. They are expected to report any irregularities they detect. Unfortunately there are now attempts to pervert their purpose. The active withholding of observer missions is now used to delegitimize elections even when those are fair and follow all the relevant rules. Recent examples are the presidential election in Belarus and the upcoming congressional election in Venezuela.

Back in June we detected a planned color revolution in Belarus by connecting various media reports that hyped the weak opposition forces.

One additional indication that the election in Belarus would be used for nefarious purposes was the willful absence of OSCE election monitors.

Belarus had, as usual, expected the OSCE Office for Democratic Institutions and Human Rights (ODIHR) to send election observers for the August 9 election. But the OSCE preemptively announced that it would not do so because an invitation was allegedly too late:

“The lack of a timely invitation more than two months after the announcement of the election has prevented ODIHR from observing key aspects of the electoral process,” ODIHR Director Ingibjörg Sólrún Gísladóttir said. “These include areas we have noted in recent observation reports as requiring improvement in Belarus, such as the formation of election commissions and registration of candidates. It is clear from the outcomes of these processes that the authorities have not taken any steps to improve their inclusiveness.”

The government of Belarus was surprised by the one-sided step:

“Indeed, to be honest, ODIHR’s decision was disappointing and unexpected. We really hope that this decision will be revised. After all, today, a day after the registration of presidential candidates, in line with earlier public statements, the Ministry of Foreign Affairs has sent invitations to the OSCE Office for Democratic Institutions and Human Rights, the Commonwealth of Independent States and the Shanghai Cooperation Organization. These are our traditional partners in election observation. We remain strongly committed to our promises and obligations, including within the framework of the OSCE,” Anatoly Glaz said.

He emphasized that Belarus has never held elections without observation. “This time we were also determined to invite OSCE/ODIHR observers after the candidate registration. It was announced publicly on numerous occasions, we informed our western partners, senior officials of the Office and personally Ingibjorg Gisladottir about it. We are absolutely transparent in this context and this can be double-checked,” the spokesman said.

The willful absence of OSCE election observers later allowed ‘western’ media and politicians to claim that the election, which Belarus’ President Lukashenko won, had been unfair.

In an August 18 interview Russia’s Foreign Minister Sergei Lavrov pointed out that the OSCE argument was wrong:

There are international legal frameworks that must serve as guidance when it comes to determining one’s attitude towards events in a specific country. […] [T]he Organisation for Security and Co-operation in Europe (OSCE) has an Office for Democratic Institutions and Human Rights (ODIHR). One of its responsibilities is to monitor national elections in the OSCE member states. This responsibility is part of the obligations signed by all members of this highly respected organisation, without exception. We are being told that the violations during the election campaign were obvious and documented by voluntary observers, on social media, on camera, etc. The ODIHR itself, which was supposed to monitor the elections, claims that its representatives did not go to Belarus because the invitation was sent too late. This is not true, to put it mildly, because, like any other OSCE member state, Belarus’s only commitment is “to invite international observers to national elections.”

There is no timeline for inviting OSCE election observers. The OSCE should have prepared for the mission before the official invitation took place.

The scheme to not send election observers when an unwanted candidate is likely to win now sees a repeat with regards to Venezuela.

On September 2 the President of Venezuela Nicolas Maduro invited the European Union to send election monitors to watch over the congressional election that will take place on December 6:

Foreign Minister Jorge Arreaza said on Twitter that a letter had been sent to UN chief Antonio Guterres and EU top diplomat Josep Borrell, outlining “the broad electoral guarantees agreed for the upcoming parliamentary elections,” and inviting them to send observers.

The move came a day after Maduro pardoned more than 100 lawmakers and associates of opposition leader Juan Guaido “in the interests of promoting national reconciliation” ahead of the polls.

A week later the EU claimed that the three month preparation time was too short for it to send monitors:

The European Union has received an invitation to observe parliamentary elections in Venezuela in December, but President Nicolas Maduro’s authoritarian government so far has not met “minimum conditions” to allow it to do so, an EU spokeswoman said on Friday.

The spokeswoman, in a statement to Reuters, said “time is already too short” to deploy a full EU Electoral Observation Mission if Maduro’s administration does not delay the vote beyond the current date of Dec 6.

The “time is too short” argument is obviously nonsense. The UN and the EU were already invited in January and had plenty of time to prepare themselves:

MOSCOW, January 24. /TASS/. /TASS/. Venezuelan President Nicolas Maduro has invited obsevers from the United Nations, European Union and several Latin American countries to the parliamentary elections that will be held in the Bolivarian Republic later this year, the press service of the Venezuelan Foreign Ministry said on Friday.

What the EU really wants though is to prevent the elections from taking place in an orderly manner:

Venezuela’s opposition has split on whether to participate in the elections, which will see voters elect delegates in the National Assembly. The current assembly head, Juan Guaido, is recognized by the EU as Venezuela’s legitimate head-of-state, though Maduro retains control of the government and military.

Guaido’s coalition of parties has vowed to boycott the election to avoid legitimizing an electoral process they deride as rigged. But in recent weeks another opposition bloc has emerged, under two-time former presidential candidate Henrique Capriles, which says Guaido’s stance risks making the opposition irrelevant and a strategy based on persuading foreign nations to impose sanctions on Maduro’s government has failed.

The opposition rejects to take part in the election unless European monitors are deployed. The EU then rejects to send monitors. It thereby sabotages an election that have an outcome the EU may not like.

Should the election take place and should Maduro’s party, for lack of opposition participation, win a solid majority the EU will claim that the election was unfair even when every vote will have been counted correctly.

This scheme of not sending election observers is not furthering democracy and legitimate elections. It is a willful sabotage of elections where the most likely outcome is contrary to the preferences of those observer organizations. It discredits their original purpose.