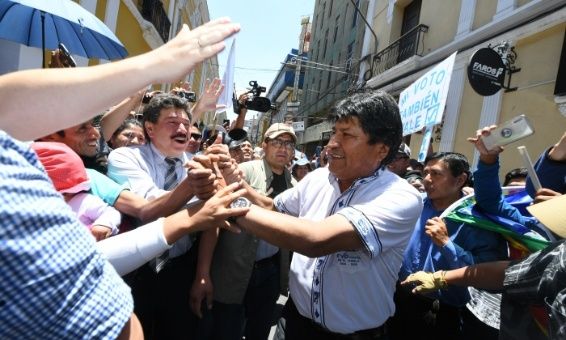 Evo Morales announced that there would be a second round if fraud is proven, after an audit of the electoral process on October 20.

On Saturday, the president of Bolivia, Evo Morales, invited the foreign ministers of Argentina, Brazil, Colombia and the United States to visit the country to do an audit of votes from the general elections held on October 20 and said that if fraud is verified, he will summon a second round.

In a tweet, the president said “we have heard the positions of the foreign ministries of Colombia, Argentina, Brazil and the US”.

“I invite those and other countries to participate in the audit we have proposed. Let all the minutes be reviewed. If fraud is proven at the conclusion of the process, we will go to the second round.”

The governments of Argentina, Brazil, Colombia and the United States proposed a second electoral round if the Organization of American States (OAS) fails to verify the results of the elections in Bolivia between President Evo Morales and the opposition Carlos Mesa.

In the event that the OAS Electoral Observation Mission “is not in a position to verify the results of the first round, we call on the government of Bolivia to restore the credibility of its electoral system through the call for a second electoral round that is free, fair and transparent, between the two candidates with the most votes” they said.

The Bolivian government asked the Organization of American States (OAS) to conduct an audit of the general elections in Bolivia, with the objective of making the results of those elections transparent.

President Evo Morales, candidate for “Movimiento al Socialismo” (MAS), won the general elections held in Bolivia last Sunday, with 47.8% of the votes, according to the official calculation of the Supreme Electoral Tribunal (TSE).

Cuba, Venezuela, Russia and the Non-Aligned Movement (NAM), ask for that victory to be respected in the first round.

Featured image:In a tweet, the president said “we have heard the positions of the foreign ministries of Colombia, Argentina, Brazil and the US”. | Photo: ABI