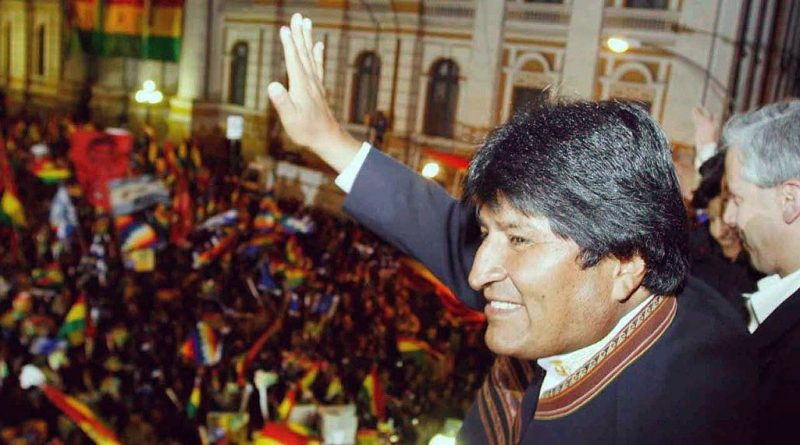 After 194 years since its foundation, Bolivia is now highlighted as a sovereign and independent country, with significant economic, political and social advances, as well as international recognition, under the administration of President Evo Morales.

By By Red Angostura

Throughout the whole month, the population is commemorating August 6, 1825, the day the country’s autonomy was declared from the Spanish control and the Republic of Bolivia was created.

In turn, Vice-President Alvaro Garcia Linera remarked that this date is commemorated with good results to show and an optimism about the future so that these results can be improved in the coming years.

Before 2006 the Bolivia went through a succession of neoliberal governments, one after another. All of them characterized by the privatization of strategic companies and natural resources handed over to large transnational companies, as well as the intervention of foreign powers in domestic affairs.

In the nineties, a capitalization process was undertaken nationwide and according to recent research, conducted by a joint commission of the Pluri-national Legislative Assembly, that process caused over $ 20 billion in damage to the Bolivian State.

Among the consequences of the neoliberal past, experts point at the increase of the foreign debt resulting in a large part of the population being pushed into poverty.

RELATED CONTENT: Argentina’s Presidential Election 2019 – is this the Year that the Latin American Left Launches a Counter-Offensive?

A Process Changing the Story

In 2005, Bolivians changed the course of their story. For the first time, an indigenous president was elected. Head of the coca farmers’ unions, Evo Morales won the general elections with 53.72% of the vote. Once in office Morales immediately began a process of change with economic, political and social transformations for the benefit of all sectors of the population. He also nationalized hydrocarbons that year which was a historic decision that was pivotal to the country’s growth.

As a result of the increase in public investment foreign impositions, blackmailing and pressure from international financial institution ceased, ending the circle in which loans were given under the condition of privatizations.

Public work projects carried out during these 13 years are evident nationwide and are and new ones are constantly being inaugurated by the President in the fields of education, sports, production, social infrastructure, health, sanitary, irrigation, and road management.

Through policies of the Pluri-national State, chronic malnutrition decreased by 50 percent in children under five years. In 2003, it was 32.3 percent of children and in 2016 it was 16 percent.

Since 2009, over two million Bolivian mothers and children receive the Juana Azurduy Bonus, a financial incentive and nutritional products aimed at reducing maternal and infant mortality and chronic malnutrition in children under two years old.

Between 2006 and 2018, through the My Health program, a total of 2,768 doctors made over 16.4 million free consultations —50 percent of them at home in 310 municipalities and 24 indigenous communities. Also, over 700,000 free eye surgeries were carried out nationwide through the Operation Miracle program that was carried out by Cuban and Bolivian doctors to bring vision to poor patients all over the country.

Through an agreement between the governments of Cuba and Bolivia over 8,000 Cuban doctors have been in the country since 2006 and in that time they have made over 70 million medical consultations and saved the life of about 100,000 people.

Bolivia has a single health system that has been in place since March of this year. It is a government initiative providing universal, free and with quality and benefits for more than half of the population who have no medical insurance or economic resources to go to private clinics.

A total of 8,797 public work projects have been carried out between 2007 and July 2018 through one social program in the fields of education, sports, roads, production, basic sanitary, and irrigation, as well as social infrastructure and health.

Over a million people over 60 years old are benefiting from an economic incentive since 2008, while students also receive a financial transference so as to increase enrollment and reduce them abandoning their education. Among the historic advances in education, Bolivia was declared a territory free of illiteracy by the United Nations Educational, Scientific and Cultural Organization (UNESCO) on December 20, 2008.

Recently, the Economic Commission for Latin America and the Caribbean (ECLAC) predicted a four percent growth in Bolivia’s economy 2019 —the highest in South America for sixth year in a row.

On July 2019, the International Monetary Fund (IMF) acknowledged the success of the economic policies implemented by the Evo Morales Administration, while the World Bank’s Global Economic Prospect 2019 commented that this country would maintain the growth reached the previous year.

What is most important, according to many, is that Bolivians have recovered their dignity and are proud of their identity in a world that recognizes these achievements were made primarily from the direction of President Evo Morales.

Evo Morales, now a presidential candidate again, recently reiterated that he has confidence in the people to secure a win in the general elections on October 20 so as to continue with the process of changes.

In May over a million people including militants and followers gathered in Cochabamba city, in the central part of Bolivia, to express their support to President Evo Morales and Vice-President Alvaro Garcia Linera. A similar scenario repeated on August 2, when thousands of people gathered in the eastern city of Santa Cruz to ratify and legitimate Morales’ nomination.

Participants in these two rallies reaffirmed their support for the Bicentennial Agenda, the name of the the current program developed by the Bolivian Government with a view towards the year 2025, in homage of the 200 years since the country’s foundation and aimed at strengthening all the achievements.

As Minister of the Presidency Juan Ramon Quintana said, that in the October elections there will be a choice between the resumption of neoliberal formulas implemented by previous governments or the permanence of the fully functioning Pluri-National State, through this great project of prosperity fostered by Evo Morales that has been going on for over a decade now.