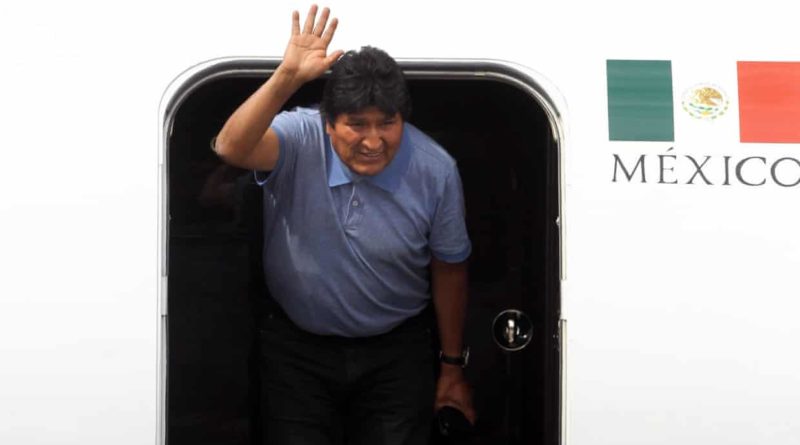 Bolivia’s toppled president flies out of Mexico for what his former health minister says is a medical appointment.

Bolivia’s recently toppled president, Evo Morales, has left Mexico for Cuba as part of what some observers suspect is the first step in a bid to stage a dramatic political comeback.

On Friday night, less than a month after being forced into exile in Mexico, Morales flew out of the country on a plane bound for Havana.

Mexico’s foreign relations ministry confirmed that Morales had left for Cuba on Friday, on what it called a temporary visit.

Last month a commentator from the same newspaper, Salvador García Soto, had predicted Bolivia’s first indigenous president would relocate to another Latin American country “where he would be able to organise his resistance plan and strategy to attempt to return to Bolivia to recover power in the near future”.

Morales touched down in Mexico on 12 November after Mexico’s leftist leader, Andrés Manuel López Obrador, sent an airforce plane to rescue him from the South American country he had governed since 2006.

Morales fled Bolivia after being forced to resign on 10 November in what political foes celebrated as a popular uprising against an increasingly authoritarian leader but which Morales’ supporters branded a right-wing coup d’état.

“It is a racist coup,” Sacha Llorenti, Morales’ former ambassador to the United Nations, said in a recent interview.

On Friday, Spain’s El País reported that Morales was also unlikely to spend much time in Cuba and instead planned to relocate to Argentina once that country’s new leftist leader, Alberto Fernández, took office next week.

The Mexican newspaper Reforma said Morales had travelled to Cuba with his former vice president, Álvaro García Linera, and his former health minister, Gabriela Montaño. “President Evo Morales is in Cuba for a medical appointment with the Cuban medical team that treated him in Bolivia,” Montano told Reuters.

In a recent interview with the Guardian in Mexico City, Morales hinted that his political aspirations had not ended with exile.

For now, a return to Bolivia looks highly unlikely. Morales has ruled out taking part in a fresh round of presidential elections, called as a result of suspicions of vote rigging in his favour.

Last month the interior minister of Bolivia’s rightwing interim government vowed to jail Morales for the rest of his life for allegedly inciting anti-government protests that he claimed amounted to terrorism.

“Any terrorist should spend the rest of their life in prison – any terrorist – Evo Morales or whoever. It’s not about whether you’re an ex-president or white or black or a campesino … In fact, it’s even worse when it’s an ex-president,” Arturo Murillo said.