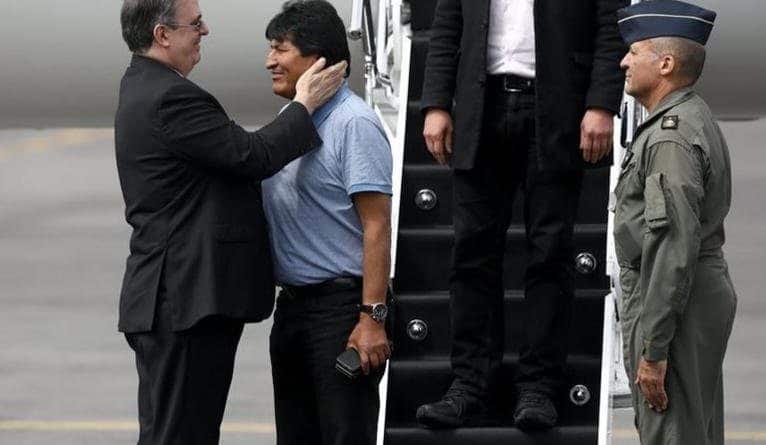 The Mexican Air Force plane carrying President Evo Morales, deposed by a coup d’etat, landed Tuesday at the International Airport of Mexico City, after the government of Andrés Manuel López Obrador offered him political asylum for “humanitarian reasons”. In a brief statement, he thanked the Mexican government for “saving his life.”

The Mexican Foreign Minister, Marcelo Ebrard personally received Evo Morales at the airport, who was accompanied by his vice president, Álvaro García Linera, and his Minister of Health, Gabriela Montaño.

In a message to the media, Evo Morales thanked President López Obrador and the people of Mexico for saving his life.

“I am very grateful to the president and the Mexican people, because he saved my life”. He explained that, on Saturday, November 9, “an army security member showed me messages” asking him to capture me “in exchange for US$ 50,000, one day before my resignation” Morales said.

“As long as I have life, Iwill keep fighting”
The Bolivian politician explained that, despite his forced exile because of the coup d’etat that was perpetrated against him after proclaiming himself the winner of the first round of the presidential elections in Bolivia, he will not abandon political activity.

“As long as I have life, we continue in politics, the struggle continues, and we are sure that the people have every right to free themselves. I thought we were done with oppression, humiliation, but other groups emerge that do not respect life and less, the country,” said the deposed president of Bolivia.

He explained that the coup strategy began after the results achieved by the progressive forces and the Movement for Socialism (MAS) in the general elections of October 20. He pointed out that the coup d’etat is a lesson to strengthen the struggle of the peoples.

For security reasons, the Mexican Government reserved information on where Morales and his collaborators will spend the night.

The Mexican plane that transferred Morales suffered a complicated journey due to the refusal of several countries, including Peru, Paraguay, Ecuador and Bolivia itself, to allow them to land or fly over them.