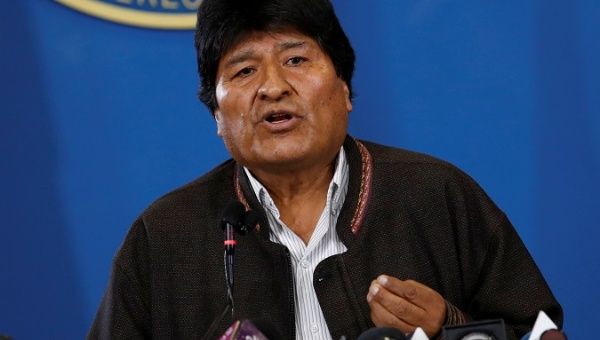 “Neither the Police nor the Army can get stained with the Bolivian people’s blood,” Evo Morales said.

At a press conference in El Alto on Saturday, Bolivia’s President Evo Morales announced that he would not resort to force to halt protests and summoned political parties to an immediate dialogue.

“We have already endured with much patience so far. Neither the Police nor the Army can get stained with the Bolivian people’s blood,” Morales said.

“In order to preserve the new Bolivia, democracy and life, I summon parties that obtained assembly members… to dialogue and debate to pacify Bolivia. I convene a meeting urgently and immediately.”

The parties that achieved the highest number of lawmakers were the Movement Towards Socialism (MAS), Citizens’ Community (CC), the Christian Democratic Party (PDC) and the Bolivia Alliance.

President Morales also announced that the dialogue among these four political forces may be accompanied by representatives of international organizations and churches.

“All the people from the Alto mobilized to support the legitimate president in response to the threats of the coup plotters and the ongoing coup d’etat. Evo you are not alone. Bolivia resists.”

He reiterated once again his complaint that a coup d’etat is actually being executed and asked the population to resist peacefully.

“I ask patriots, social activists, followers, public servants and those who historically recovered democracy to defend the homeland and the Bolivian people’s vote.”​​​​​​​

The MAS leader’ call to dialogue, however, was not immediately accepted by opposition politicians​​​. One of them is ​​​​​​​the National Committee for the Defense of Democracy president, Waldo Albarracin, who insisted that Morales’s resignation is the only way to pacify the country.

In response to the police mutiny that happened in the Santa Cruz city on Friday, Morales dismissed the departmental commander of the Police Igor Echegaray.

“You are withdrawn and made available to the national personnel directorate of the Bolivian Police General Command,” a memorandum published by the local outlets says.

Previously, the Santa Cruz entrepreneur​​​​​​​ Fernando Camacho summoned the Army and the Police to disobey the Morales administration.