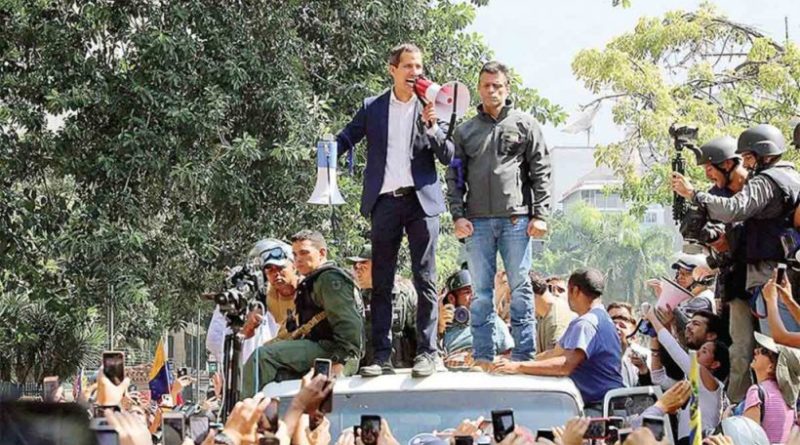 From the beginning, Juan Guaidó tricked his followers with the “cessation of usurpation”, which meant the change of regime with the supposedly “institutional” parapet that they armed from the National Assembly (in contempt) and the corresponding international push given by the US and the satellite governments of the Lima Group.

The charm of the first days was fading organically, almost with the same speed that the Guaidó product was manufactured. From there, each passing month would add another element to the list of reasons for anti-Chavismo to hate the deputy of Popular Will.

We collected memorable moments closing the first half of the year, however, disappointments do not have to end there.

1. WHERE IS THE MONEY FOR HUMANITARIAN AID?
It was assumed that the United States, through USAID, had delegated resources and supplies in February to “address the humanitarian crisis” valued at least $ 20 million.

These were per diem and props that would use anti-Chavismo on the coup d’etat route. Management was in charge of Guaidó delegates who embezzled the funds in prostitution and using them for personal expenses, as well described by the PanAm Post report.

Although this is not the only way by which the “transitional government” received funding from the White House. In addition to what it receives for illegally managing Citgo Petroleum and Monómeros, $ 52 million was publicly transferred in mid-September, of which 19 million were to guarantee “tools to govern if they managed to displace Maduro from power.”

In neither case did the defection of President Nicolás Maduro occur, much less is it known where the money destined for medicine and food for the most vulnerable went.

This is one of the issues that inoculates rejection in his followers thanks to the image that today results from the doling out of money: scavenger deputies demanding explanations about the resources they stopped seeing for not being among the privileged (inner circle).

2. THE DESERTING MILITARY WHO WERE ABANDONED
The “Cucutazo” also led to the conflict with former members of the Bolivarian National Armed Forces (FANB) who crossed the border to join the irregular army of Juan Guaidó. According to the projections of White House officials such as Bolton and Marco Rubio, a massive wave of officials were going to abide by the call for insurrection, consolidating the FANB’s break [with Maduro].

On the pitch a few hundred of them defected, leaving for Colombia under the promise of protection and an improvement in their economic situation. According to the Foreign Ministry of that country, 1,285 Venezuelans , among ex-military and family, were housed in shelters and hotels after the February 23 operation failed.

RELATED CONTENT: Reality’s Dawning on US Media That Venezuela Coup Failed & Maduro’s Stronger – What Next, ask Russia to “Ease Him Out”?

A few weeks passed before UNHCR, a UN refugee agency, stopped receiving them in the shelters and the Guaidó team waived paying their hotel stay, to which the group of deserters responded with riots and complaints to the Duque government and the Venezuelan opposition, becoming a burden for the Colombian departmental authorities.

Without the right to mobilize outside Cúcuta area and with threats of being expelled from the country, these potential anti-Chavista terrorist cells were forgotten. Abandoned.

3. VENEZUELAN MIGRANTS ARE SCAMMED BY GUAIDÓ REPRESENTATIVES
The Venezuelan encouraged to emigrate by the propaganda apparatus of anti-Chavismo and illegal economic sanctions issued by the United States has to deal with another false promise of 2019: to improve his immigration status through the “interinato” of Guaidó, especially in the countries that accepted fake “Guaido government” representatives.

In May, the “minister” residing in Washington, Gustavo Marcano, announced that dozens of countries, between Europe and Latin America, would accept expired passports of Venezuelans due to the “impediment to renew them.” Marcano intended to obviate consular authorities and the legitimate path to obtain TRAVEL documents. In the end, it did not happen with those governments receiving the proposal.

It was a promise that generated discomfort among Venezuelans with irregular status abroad and those who ventured to emigrate based on the announcement.

Meanwhile, in Colombia, false self-exiled magistrates made their own assembly to profit from migrants: PanAm Post unveiled the plot in which the “judges” charged for offering advice to activate the action of guardianship (tutela), a Colombian judicial resource to which all persons are entitled and that is free.

Not even the United States, the main promoter of the Guaidó team, has a consensus on offers to address immigration status.

The approval of the Temporary Protection Status (TPS) by the lower house of Congress had more obstacles than expected by the opposition leadership and its scope is not even defined.

Both Democrats and Republicans deal with the fact of the political influence of Venezuelans in the state of Florida, in the face of the 2020 presidential elections, but, on the other hand, they are cautious with the gap that would make more migrants, a situation that is opposed to Trump’s politics of borders with walls.

4. WHY HIDE THE DIALOGUE WITH THE GOVERNMENT OF NICOLÁS MADURO?
A significant infraction for the most extremist opposition factions is that Juan Guaidó has broken the promise of being “unyielding” with the national government, by showing a willingness to negotiate with its authorities, even though the dialogues in Norway and Barbados have not reached good ends as a result of US officials’ orders.

Gerardo Blyde and Fernando Martínez, advisers of the self-proclaimed, traveled to Europe to meet with the delegates of Chavismo, Minister Jorge Rodríguez and Governor Héctor Rodríguez, when the precipitous attempted military coup on April 30 did not achieve its objectives.

But what they consider more serious is that he lied from the beginning. Every time CNN’s info-mercenary in Spanish, Patricia Janiot, interrogated Juan Guaidó about his meetings with the president of the National Constituent Assembly (ANC), Diosdado Cabello, he denied them outright.

Months later, Diosdado Cabello published the audios and videos in which, in fact, the meeting held at the Hotel Lido on January 22, hours before the famous self-proclamation, is evident.

5. THE SANCTIONS WERE NOT ONLY AGAINST MADURO
And this unfulfilled promise is bequeathed by Julio Borges, leader of “Primero Justicia” party, who acted diligently in 2017 to increase coercive measures against the Venezuelan economy while he was president of the National Assembly.

The consequences of the total embargo, announced on August 5 by the Trump Administration, for private sectors and the population in general contradict the statement in defense of the measure made by Juan Guaidó.

“This action seeks to protect Venezuelans,” he said then, although the Executive Order allows the United States the blocking of investments and transactions of national and foreign companies that trade with the Venezuelan State.

Before the embargo was formalized, DatinCorp published a poll in which 68% of respondents felt that international sanctions affected their quality of life.

Guaidó also said that the action would have “humanitarian exceptions regarding food and medicine”, a new lie, because in parallel the State Department intensified the siege against the CLAP food program and blocked the entry of ships with inputs destined for industry and food production.

In summary, the list adds sufficient reasons for the Venezuelan opposition base not to be taken by surprise by the scam that comes in the year 2020, when its leadership, following the orders of the chiefs in the White House, reconfigures the strategy to continue trying to undermine the political stability of Venezuela.

Featured image: Not even with Leopoldo López briefly on the streets could Juan Guaidó positively influence the attempt to change the regime in Venezuela (Photo: EFE)