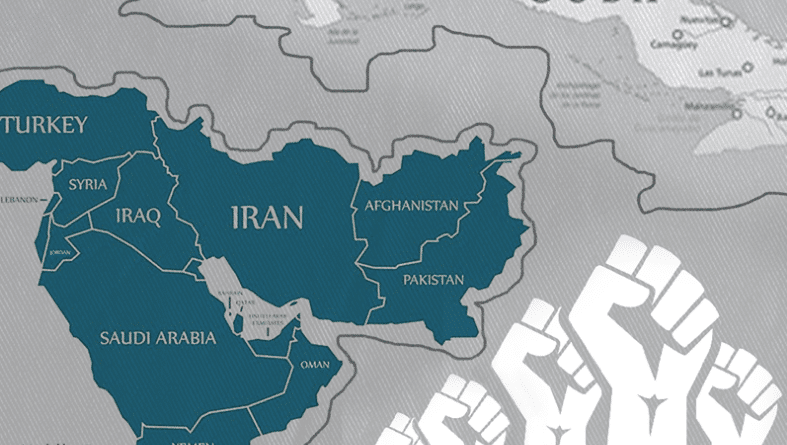 “The trees must form ranks to keep the giant with seven-league boots from passing! It is the time of mobilization” –José Martí

The failing advance of eight US-driven wars of aggression in the Middle East has boosted resistance links in the region and across the world. As imperial globalism fails, resistance is being globalized.

This is the central dialectic of our time. Washington’s 21st-century over-reach, in a bid to maintain its dominance by trying to block emerging multi-polar and Eurasian centers of power, has instead helped enhanced them.

The resistance has realized that a high degree of unity is required to defeat the new wave of aggression from the common enemy, as Cuba’s national hero José Martí said 130 years ago. Building strong links between independent peoples is the task at hand.

That is why the late Hugo Chávez and the late Fidel Castro worked so hard to create new regional organizations and so protected their region from imperial predators; and that is why the Iran-led Axis of Resistance bloc (so far: Iran, Palestine, Syria, Iraq, Hezbollah, and Yemen) is consolidating its strategic links today.

The resistance counter-movements are stark, crossing cross cultures and continents. As Washington invaded Afghanistan and Iraq, its globalist project at the World Trade Organization (WTO) failed, leading to a new regionalism in trade and economic matters, part of which is counter-hegemonic.

In 2005 Hugo Chávez arrived in Argentina with a shovel to join his allies in the “burial” of the US-led “Free Trade Area of the Americas.” The progressive Latin bloc had just created the Cuba-Venezuela-led ALBA (the Bolivarian Alliance) and went on to resurrect UNASUR (the Union of South American Nations) and build the CELAC (Community of Latin American and Caribbean States).

Meanwhile, NATO’s colony in Palestine pushed its ethnic cleansing so far that the fig leaf of “two states” dropped, unmasking the ugly reality of Zionist apartheid, a disgrace from which there is no escape. Given the staunch resistance of the people of Palestine, rising international illegitimacy will open the way for a dismantling of the apartheid state.

The series of failing “New Middle East” wars have led to renewed US bombing of Iraq and Syria, eighteen and ten years after those aggressions began. But the foreign occupation of these long-suffering Arab countries is fragile, with the US-backed mass terrorism mostly defeated.

The persistence of these treacherous wars has drawn assistance from Russia and China, the very competitors Washington hoped to exclude. The Eurasian giants are now important Resistance allies and are making long-term and strategic investments, demonstrating further the futility of Washington’s losing gambit.

Even Trump’s cowardly murder of the much-loved resistance commander, Qassem Soleimani, intended to break and demoralize, instead galvanized the fractious forces within Iraq, leading to a unanimous demand by Iraqi lawmakers for a US exit from the country. Across the region, especially in Iran and from the Resistance in Lebanon, that call was reinforced by a demand for the US to leave the entire region.

Israeli interventions in the dirty war on Yemen, allied to the Saudis and UAE, driven by zionist ambitions and Washington’s NME project, simply confirmed the commitment of the Ansarallah-led coalition in Yemen to the strategic aims of the Regional Resistance.

RELATED CONTENT: Know Your Enemy: How to Defeat Capitalism

So despite the forced “normalization” with Israelis on the part of some of the Arab monarchies, many of those same comprador elites, not least the Saudis, were demanding a truce with Yemen, restoring their links with Damascus and seeking new relations with Iran.

The more “flexible” of the regional players could see the proverbial writing on the wall, and even more threats from Washington seemed to lose their bite.

The strategic and economic agreements between China and Iran and Russia and Iran should be seen alongside the ongoing cooperation with Venezuela and Cuba. The economic siege measures against all these parties have ensured a deepening of their strategic cooperation.

While the enemy skillfully played the sectarian religious card to divide and rule the Middle East region, this does not seem to have much affected the growing bonds between (for example) Islamic Iran, nationalist Palestine, Pan-Arabist Syria, and pluralist Lebanon.

A Cuban communist once told me the secret of their success: “unity and culture.” That did not mean they would impose their culture on others; it meant they would stick together and shared their best with other decent cultures.

In both regions, there was enough common ground and shared principle between the resistance parties to “form ranks,” expel imperial incursions and build new social structures based on their own cultures and lived realities.

Powerful allies with distinct goals, in particular Russia and China, simply add important counter-weight to that Resistance project. An independent Middle East can and should emerge as the West Asian heart of Eurasia. Respectful friends would be welcome.

Tim Anderson is director of the Sydney-based Centre for Counter Hegemonic Studies.