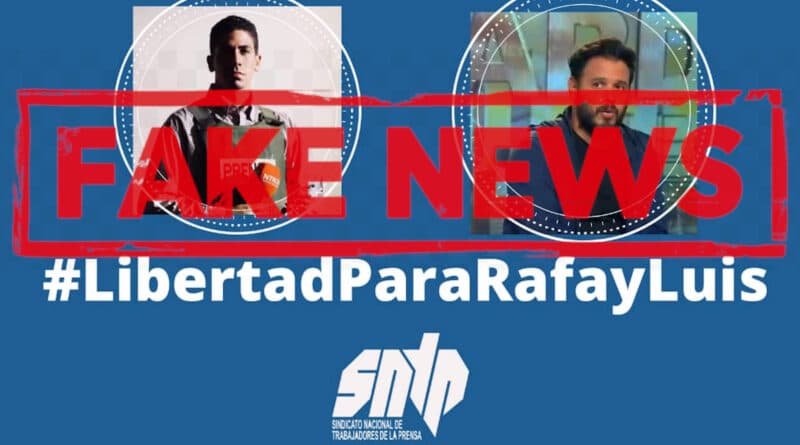 This Thursday, April 1, the launch of a new media conspiracy against Venezuela was attempted on social media networks and in the US-financed “free press,” but the truth quickly emerged. Finally, the alleged detention of journalists in Apure state, allegedly covering  the events in the Colombian-Venezuelan border territory, was reported as false.

A new fake news story was spread by some media and journalists who assured that several journalists and activists were apprehended; some even dared to describe the arrests as “force disappearance.”

In addition, social media exploded with manipulations and falsehoods that accused the Bolivarian National Armed Forces (FANB) of non-existent detentions.

“The situation is tense, and it was impossible to enter by La Victoria,” said one of the journalists in a video. “We went through El Amparo, Arauca, and Arauquita.”

New theater
On this occasion, the case revolved around the Venezuelan journalists from the Colombian news outlet NTN24, Rafael Hernández and Luis Gonzalo Pérez, and “activists” from the FundaREDES NGO, Juan Carlos Salazar and Diógenes Tirado.

Several videos with testimonies from the aforementioned press workers and alleged “activists” showed that what happened was the comprehensive protection of their well-being.

They said that they wanted “to take shots of people coming back to Venezuela and those shots could only be taken in Arauquita,” explained another journalist.

Likewise, the official account of the TV program Zurda Konducta showed that the journalists were protected by the Venezuelan Army (FANB).

“Our safety could have been endangered by going down the road, because as far as I understand there is no passage,” said one of the “activists.”

In the same way, the well-being of the aforementioned citizens was ensured in the presence of violent paramilitary groups on the Colombian side of the border.

Protection, not detention
The journalists entered through Colombian territory to Arauquita, and from there they entered illegally into Venezuelan territory, precisely in the middle of battles with criminal groups.

This Thursday, April 1, a  tense situation occurred with the explosion of mines placed by these unlawful groups, in which two Venezuelan soldiers died.

Similarly, nine FANB officials were injured in the events and were immediately transferred to a health center.

The “activists” were accompanied by the FANB to ensure their personal safety, which was under threat.

Without realizing it, the journalists were in dangerous territory and had no way out, until a group of officers gave them protection.

Fake news dismissed
The new media fiction, launched to discredit Venezuela and its authorities, lasted only hours because it was immediately denied with strong evidence.

Although the effects of the fake news remain in what experts call the post-truth, the same “activists” described the protection they received by the FANB as heroic. Before leaving the army post they even received food from the Venezuelan Army, as captured in the photos below, and happily waved goodbye while leaving.

In the case of the armed conflict in the border territory, they have unleashed a laboratory of lies with a campaign of media warfare.

Nevertheless, the truth came out, revealing the conspiracy of media corporations that seek to attack the Bolivarian Revolution