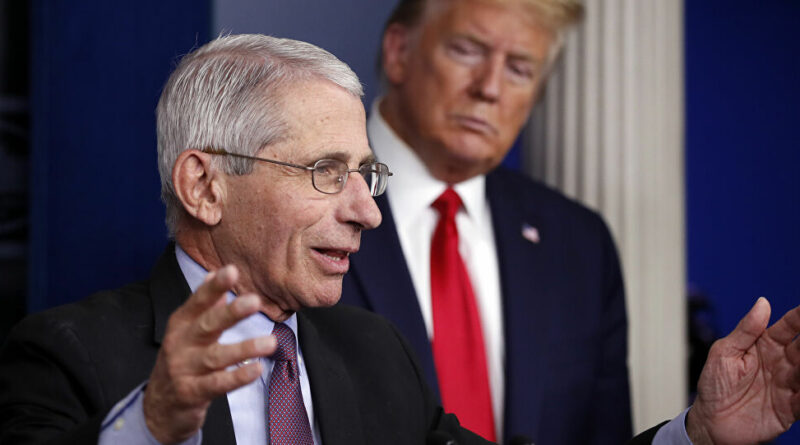 October 12, 2020.-  MOSCOW (Sputnik) – Top US infectious disease expert, Anthony Fauci, says his words were taken out of context in a new advertisement from the election campaign of US President Donald Trump, CNN reports.

“In my nearly five decades of public service, I have never publicly endorsed any political candidate. The comments attributed to me without my permission in the GOP campaign ad were taken out of context from a broad statement I made months ago about the efforts of federal public health officials,” Fauci, who is the Director of the National Institute of Allergy and Infectious Diseases, told CNN on Sunday.

The new 30-second advertisement released by the Trump campaign uses a quote from Fauci’s March interview with Fox News, according to CNN.

“I can’t imagine that anybody could be doing more,” Fauci said in March, referring to the work of the White House coronavirus task force. However, the new ad makes it sound like Fauci is praising the work of Trump himself.

Trump campaign communications director Tim Murtaugh said as quoted by CNN on Sunday that the new ad uses Fauci’s own words that “are accurate, and directly from Dr. Fauci’s mouth.”

“These are Dr. Fauci’s own words. The video is from a nationally broadcast television interview in which Dr. Fauci was praising the work of the Trump Administration,” Murtaugh said.

Commenting on the controversial ad, Trump sided with the response of communications director Tim Murtaugh.

“They are indeed Dr. Fauci’s own words. We have done a ‘phenomenal’ job, according to certain governors. Many people agree…And now come the Vaccines & Cures, long ahead of projections!” Trump wrote on Twitter on Sunday.

They are indeed Dr. Fauci’s own words. We have done a “phenomenal” job, according to certain governors. Many people agree…And now come the Vaccines & Cures, long ahead of projections! https://t.co/ANqKL4eBqJ

In March, the Trump administration and Congress finalized the $2 trillion Coronavirus Aid, Recovering and Economic Security (CARES) Act. Another aid package has not been agreed upon amid stalled stimulus talks.

Trump’s Democratic challenger Joe Biden has repeatedly criticized Trump’s coronavirus response as being too slow. The United States remains the country with the largest number of registered coronavirus cases (over 7.7 million) and the highest COVID-19 death toll (over 214,700).